The Million Dollar Bridge was a bascule bridge built in 1916 which carried traffic on Route 77 over the Fore River in Maine between Portland and South Portland.

Permits to construct the Million Dollar Bridge were issued by the Secretary of War in 1893. The bridge was designed in 1914 and opened to traffic in 1916. The bascule span provided a horizontal clearance of 100 ft (30.5 m). Originally owned by Cumberland County, the bridge was transferred to the Maine Department of Transportation in 1959. 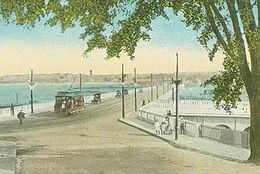