Lausanne (French pronunciation: [loˈzan]) is a city in Romandy, the French-speaking part of Switzerland, and is the capital of the canton of Vaud. The seat of the district of Lausanne, the city is situated on the shores of Lake Geneva (French: Lac Léman).[3] It faces the French town of Évian-les-Bains, with the Jura mountains to its north-west. Lausanne is located 62 km (39 mi) northeast of Geneva.

Lausanne has a population (as of December 2009[update]) of 125,885,[1] making it the fourth largest city of the country, with the entire agglomeration area having over 330,000 inhabitants.[4] The Metropolitan Area of Lausanne-Geneva is over 1.2 million inhabitants. The headquarters of the International Olympic Committee are located in Lausanne – the IOC officially recognises the city as the Capitale Olympique[5] – as are the headquarters of the Court of Arbitration for Sport. It lies in the middle of a wine region. The city has a 28-station metro system, making it the smallest city in the world to have a rapid transit system.[citation needed]

The Romans built a military camp, which they called Lousanna, at the site of a Celtic settlement, near the lake where currently Vidy and Ouchy are situated; on the hill above was a fort called 'Lausodunon' or 'Lousodunon' (The 'y' suffix is common to many place names of Roman origin in the region (e.g.) Prilly, Pully, Lutry, etc.).[6] By the 2nd century AD it was known as vikanor[um] Lousonnensium and in 280 as lacu Lausonio. By 400 it was civitas Lausanna and in 990 it was mentioned as Losanna.[7] 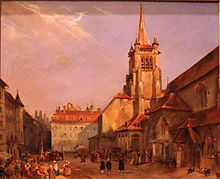 After the fall of the Roman Empire, insecurity forced the transfer of Lausanne to its current centre, a hilly, easier to defend site. The city which emerged from the camp was ruled by the Dukes of Savoy and the Bishop of Lausanne. Then it came under Bern from 1536 to 1798 and a number of its cultural treasures, including the hanging tapestries in the Cathedral, were permanently removed. Lausanne has made a number of requests to recover them.

After the revocation of the Edict of Nantes in 1685, Lausanne became (along with Geneva) a place of refuge for French Huguenots. In 1729 a seminary was opened by Antoine Court and Benjamin Duplan. By 1750 ninety pastors had been sent back to France to work clandestinely; this number would rise to four hundred. Official persecution ended in 1787; a faculty of Protestant theology was established at Montauban in 1808, and the Lausanne seminary was finally closed on 18 April 1812.[8] During the Napoleonic Wars, the city's status changed. In 1803, it became the capital of a newly formed Swiss canton, Vaud under which it joined the Swiss Federation.[9]

In 1964 the city hosted the 'Swiss National Exhibition',[10] displaying its newly found confidence to host major international events. From the 1950s to 1970s a large number of Italians, Spaniards and Portuguese immigrated, settling mostly in the industrial district of Renens and transforming the local diet.

The city has been traditionally quiet but in the late 1960s and early 1970s there were a series of mainly youth demonstrations confronted by the police. The next vigorous demonstrations took place to protest against the high cinema prices and since then the city returned to its old very sleepy self, until the protest against the G8 meetings in 2003.

The agglomeration of Lausanne, Lake Geneva and the Alps

The most important geographical feature of the area surrounding Lausanne is Lake Geneva (Lac Léman in French). Lausanne is built on the southern slope of the Swiss plateau, with a difference in elevation of about 500 metres (1,640 ft) between the lakeshore at Ouchy and its northern edge bordering Le Mont-sur-Lausanne and Epalinges. Lausanne boasts a dramatic panorama over the lake and the Alps.

In addition to its generally southward-sloping layout, the centre of the city is the site of an ancient river, the Flon, which has been covered since the 19th century. The former river forms a gorge running through the middle of the city south of the old city centre, generally following the course of the present Rue Centrale, with several bridges crossing the depression to connect the adjacent neighbourhoods. Due to the considerable differences in elevation, visitors should make a note as to which plane of elevation they are on and where they want to go, otherwise they will find themselves tens of metres below or above the street which they are trying to negotiate. The name Flon is also used for the Metro station located in the gorge. 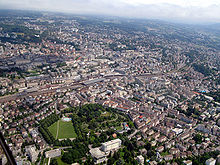 Lausanne is located at the limit between the extensive wine-growing regions of Lavaux (to the east) and la Côte (to the west).

Of the built-up area, industrial buildings made up 1.6% of the total area while housing and buildings made up 21.6% and transportation infrastructure made up 12.5%. Power and water infrastructure as well as other special developed areas made up 1.4% of the area while parks, green belts and sports fields made up 7.5%. Out of the forested land, all of the forested land area is covered with heavy forests. Of the agricultural land, 11.1% is used for growing crops and 4.2% is pastures. All the water in the municipality is in lakes.[11]

The municipality was part of the old Lausanne District until it was dissolved on 31 August 2006, and it became the capital of the new district of Lausanne.[12]

The blazon of the municipal coat of arms is Gules, chief argent.[13]

As of 2000[update] the average number of residents per living room was 0.64 which is about equal to the cantonal average of 0.61 per room.[15] In this case, a room is defined as space of a housing unit of at least 4 m² (43 sq ft) as normal bedrooms, dining rooms, living rooms, kitchens and habitable cellars and attics.[18] About 6.5% of the total households were owner occupied, or in other words did not pay rent (though they may have a mortgage or a rent-to-own agreement).[19] 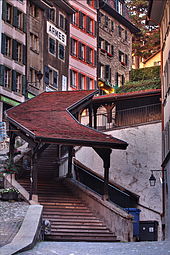 Stairs in the old city 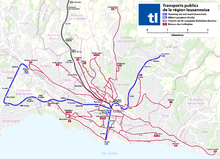 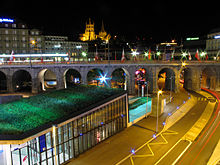 Lausanne-Flon is the hub of the metro system

Lausanne is served by extensive local, national and international public transport. National and international passenger trains depart from Lausanne's CFF railway station, which is also the hub of the Réseau Express Vaudois commuter rail system, and a stop on the city's metro. The metro and local buses are operated by TL (French), with many routes run using trolleybuses. Additional commuter trains are run by LEB (French) from Lausanne-Flon station. Ships across Lake Geneva are provided by CGN (French).

Lausanne became the first city in Switzerland to have a rubber-tyred metro system, with the m2 Line which opened in October 2008. The rolling stock is a shorter version of the one used on Paris Métro Line 14.[citation needed]

Lausanne is connected to the A1 motorway on its west side (Geneva - Zurich axis) and to the A9 on its north and east side (for transit with Italy and France); the interchange between these two motorways is on the north-west side of the city.

Lausanne Airport is located at Blécherette, and also houses a Boeing 737 Simulator.[22] The city is also directly linked by train to the Geneva International Airport, four times an hour, in 42min.

The historical population is given in the following chart:[7]

The city of Lausanne has a legislature, the City Council, with 100 members and an executive, the town hall with seven members. The legislature is elected by proportional representation from the Executive and the two-round majority system.

For the 2011-2016 legislative period, 100 members of the City Council Composition of the Municipal Council are distributed as follows:

The 7 members of the Town Hall are shared:

The town has seven departments, each headed by a Municipal Councillor (period 2011-2016):

Photo of members of the municipality

In the 2009/2010 school year there were a total of 12,244 students in the Lausanne school district. In the Vaud cantonal school system, two years of non-obligatory pre-school are provided by the political districts.[28] During the school year, the political district provided pre-school care for a total of 2,648 children of which 1,947 children (73.5%) received subsidized pre-school care. The canton's primary school program requires students to attend for four years. There were 6,601 students in the municipal primary school program. The obligatory lower secondary school program lasts for six years and there were 5,244 students in those schools. There were also 399 students who were home schooled or attended another non-traditional school.[29]

As of 2000[update], there were 12,147 students in Lausanne who came from another municipality, while 2,258 residents attended schools outside the municipality.[25]

Lausanne enjoys some world class education and research establishments, including private schools attended by students from around the world.

There are 46 buildings or sites that are listed as Swiss heritage site of national significance. Additionally, the entire old city of Lausanne and the Vernand-Dessus region are listed in the Inventory of Swiss Heritage Sites.[32] 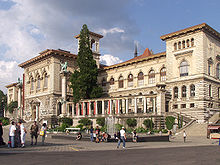 In addition to the university library, the Palais de Rumine hosts several museums

The Orchestre de Chambre de Lausanne and the Ensemble Vocal de Lausanne provide a diverse and rich musical life. The latter has been under the direction of Michel Corboz for many years.

In January, the Prix de Lausanne, a famous dance competition, takes place at the Théâtre de Beaulieu over a one-week period. The event attracts dancers and some of the big names in dance from all over the world.

Each July, the "Festival de la Cité" is held in the old part of town. There are also film and music festivals, such as the Lausanne Underground Film and Music Festival and the Bach Festival, Le Festival et Concours Bach de Lausanne, which follows "La Nuit de Musées" (museums' night, occurring in May) in the fall season.

Lausanne is also the home of the Béjart Ballet.

Lausanne is also the site of many museums:

The seat of the International Olympic Committee in Lausanne

Sporting activities are very popular in Lausanne, with water sports available on the nearby lake and mountaineering in the nearby mountains. Cycling is also a popular pastime, with the vineyards in the surrounding hills providing spectacular views and challenging routes. There is an annual track and field meeting (Athletissima), road running through the city (the 20 km de Lausanne(French)), the Tour de Romandie road cycling race, marathon (website) and triathlon competition, among other sports events. The two most important sports are ice hockey and football.

The writer C.F. Ramuz was born in Lausanne

Auguste Piccard (on the right), physicist, inventor and explorer was a resident of Lausanne

Lausanne is the birthplace of: