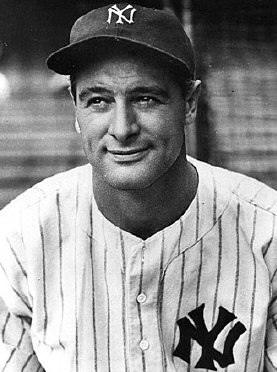 A native of , he played for the until his career was cut short by amyotrophic lateral sclerosis (ALS), now commonly referred to in the United States as "Lou Gehrig's Disease". [cite web |url=http://www.als-mda.org/disease/ |title=Amyotrophic Lateral Sclerosis (ALS) |accessdate=2008-04-16 |last= |first= |coauthors= |date= |work=Muscular Dystrophy Association (MDA) |publisher=] Over a 15-season span between Baseball Year|1925 and Baseball Year|1939, he played in 2,130 consecutive games. The streak ended when Gehrig became disabled with the fatal neuromuscular disease that claimed his life two years later. His streak, long believed to be one of baseball's few unbreakable records,Fact|date=September 2008 stood for 56 years until finally broken by , of the on , Baseball Year|1995.

Gehrig accumulated 1,995 runs batted in (RBI) in seventeen seasons with a lifetime of .340, a lifetime of .447, and a lifetime slugging percentage of .632. A seven-time All-Star (the first All-Star game was not until 1933; he did not play in the 1939 game, retiring a week before it was held — at [cite web |url=http://baseball-almanac.com/asgmenu.shtml |title=All-Star Game History |accessdate=2007-07-04 |year=2007 |publisher=Baseball Almanac] ), he won the 's Most Valuable Player award in Baseball Year|1927 and Baseball Year|1936 and was a Triple Crown winner in Baseball Year|1934, leading the American League in batting average, home runs, and RBIs.

Gehrig was born in the Yorkville section of , weighing almost convert|14|lb|kg|1 at birth, the son of poor German immigrants Heinrich Gehrig and Christina Fack.

Lou Gehrig went to PS 132 in the Washington Heights section of and then to Commerce High School, graduating in 1921. [Robinson, "Iron Horse: Lou Gehrig in His Time", p. 44.] [cite web |url=http://www.binarywire.com/ps132/background.htm |title=P.S. 132 Historical Perspective |accessdate=2008-04-16 |last= |first= |coauthors= |date= |work=NYC Department of Education |publisher=] Gehrig then studied at for two years, although he did not graduate. ["", Chicago: Field Enterprises, 1958, p. 2897.] While attending Columbia, he was a member of fraternity.

On , Baseball Year|1923, the same day that opened for the first time and inaugurated the new stadium with a home run, Columbia pitcher Gehrig struck out seventeen Williams batters for a team record. However, Columbia lost the game. Only a handful of collegians were at South Field that day, but more significant was the presence of Yankee scout Paul Krichell, who had been trailing Gehrig for some time. It was not Gehrig’s pitching that particularly impressed him. Instead, it was Gehrig’s powerful left-handed hitting. During the time Krichell had been observing the young Columbia ballplayer, Gehrig had hit some of the longest home runs ever seen on various Eastern campuses, including a convert|450|ft|m|0|adj=on home run on at Columbia's South Field which landed at 116th Street and Broadway. [Robinson, "Iron Horse: Lou Gehrig in His Time", pp. 58&ndash;59.] Within two months, Gehrig had signed a Yankee contract.

Gehrig joined the New York Yankees midway through the 1923 season and made his debut on Baseball Year|1923, as a . In his first two seasons, he saw limited playing time, mostly as a pinch hitter — he played in only 23 games and was not on the Yankees' roster. In Baseball Year|1925, he batted 437 times for a respectable .295 batting average with 20 home runs and 68 runs batted in (RBIs).

Despite playing in the shadow of the larger-than-life Ruth for two-thirds of his career, Gehrig was one of the highest run producers in baseball history: he had 509 RBIs during a three-season stretch (1930-32). Only two other players, with 507 and with 503, have surpassed 500 RBIs in "any" three seasons; their totals were non-consecutive. (Babe Ruth had 498.) [cite web |url=http://www.baseball-reference.com/awards/mvp_cya.shtml |title=MVP BAseball Players |accessdate=2008-04-18 |last= |first= |coauthors= |date= |work=Baseball Reference |publisher=] Playing fourteen complete seasons, Gehrig had thirteen consecutive seasons with 100 or better RBIs (a Major League record he shares with Jimmie Foxx). Gehrig had six seasons where he batted .350 or better (with a high of .379 in Baseball Year|1930), plus a seventh season at .349. He had eight seasons with 150 or more RBIs, 11 seasons with over 100 walks, eight seasons with 200 or more hits, and five seasons with more than 40 home runs.

In a cover story about Lou Gehrig and , "Time" magazine proclaimed Gehrig "the game's No. 1 batsman", who "takes boyish pride in banging a baseball as far, and running around the bases as quickly, as possible". [cite news |accessdate=2007-12-17|url=http://www.time.com/time/magazine/article/0,9171,770376,00.html |title=Equinoctial Climax|date=, |publisher="Time" magazine ]

On , Baseball Year|1925, Gehrig entered the game as a , substituting for shortstop Paul "Pee Wee" Wanninger. The next day, , Yankee manager started Gehrig in place of regular first baseman . Pipp was in a slump, as were the Yankees as a team, so Huggins made several lineup changes to boost their performance. Fourteen years later, Gehrig had played 2,130 consecutive games. In a few instances, Gehrig managed to keep the streak intact through pinch hitting appearances and fortuitous timing; in others, the streak continued despite injuries. For example:
* On , Baseball Year|1933, an errant pitch by Washington Senators hurler struck Gehrig in the head. Although almost knocked unconscious, Gehrig recovered and remained in the game.
* On , Baseball Year|1933, Gehrig was ejected from a game, along with manager Joe McCarthy, but he had already been at bat, so he got credit for playing the game.
* On , Baseball Year|1934, Gehrig suffered a " attack" and had to be assisted off the field. In the next day's away game, he was listed in the lineup as "shortstop", batting lead-off. In his first and only plate appearance, he singled and was promptly replaced by a to rest his throbbing back, never taking the field. 's "Biography" speculated that this illness, which he also described as "a cold in his back", might have been the first symptom of his debilitating disease.

When the Yankees began their Baseball Year|1939 in , it was obvious that Gehrig no longer possessed his once-formidable power. Even Gehrig's base running was affected, and at one point he collapsed at Al Lang Field, the Yankees' spring training park at the time in St. Petersburg. [cite news |author=Bob Chick |title=Spring Training In St. Petersburg &mdash; The Final Out |date=2008-02-24 |publisher= ] By the end of spring training, Gehrig had not hit even one home run. [Robinson, "Iron Horse: Lou Gehrig in His Time", p. 248.] Throughout his career, Gehrig was considered an excellent runner on the basepaths, but as the 1939 season got underway, his coordination and speed had deteriorated significantly.

By the end of April, his statistics were the worst of his career, with just 1 RBI and a .143 batting average. Fans and the press openly speculated on Gehrig's abrupt decline. James Kahn, a reporter who wrote often about Gehrig, said in one article:

I think there is something wrong with him. Physically wrong, I mean. I don't know what it is, but I am satisfied that it goes far beyond his ball-playing. I have seen ballplayers 'go' overnight, as Gehrig seems to have done. But they were simply washed up as ballplayers. It's something deeper than that in this case, though. I have watched him very closely and this is what I have seen: I have seen him time a ball perfectly, swing on it as hard as he can, meet it squarely — and drive a soft, looping fly over the infield. In other words, for some reason that I do not know, his old power isn't there... He is meeting the ball, time after time, and it isn't going anywhere.

He was indeed meeting the ball, with only one strikeout in 28 at-bats. But Joe McCarthy found himself resisting pressure from Yankee management to switch Gehrig to a part-time role. Things came to a head when Gehrig had to struggle to make a routine put-out at first base. The , , had to wait for Gehrig to drag himself over to the bag so he could catch Murphy's throw. Murphy said, "Nice play, Lou."

On , the next game after a day off, Gehrig approached McCarthy before the game in Detroit against the Tigers and said, "I'm benching myself, Joe", telling the Yankees' skipper that he was doing so "for the good of the team". [Robinson, "Iron Horse: Lou Gehrig in His Time", pp. 251&ndash;253.] McCarthy acquiesced and put Ellsworth "Babe" Dahlgren in at first base, and also said that whenever Gehrig wanted to play again, the position was his. Gehrig himself took the lineup card out to the shocked umpires before the game, ending the 14-year streak. Before the game began, the announcer told the fans, "Ladies and gentlemen, this is the first time Lou Gehrig's name will not appear on the Yankee lineup in 2,130 consecutive games." The fans gave Gehrig a standing ovation while he sat on the bench with tears in his eyes.

As Lou Gehrig's debilitation became steadily worse, Eleanor called the famed in . Her call was transferred to Dr. , who had been following Gehrig's career and his mysterious loss of strength. Dr. Mayo told Eleanor to bring Gehrig as soon as possible.

Eleanor and Gehrig flew to Rochester from , where the Yankees were playing at the time, arriving at the Mayo Clinic on , . After six days of extensive testing at Mayo Clinic, the diagnosis of (ALS) was confirmed on , Gehrig's 36th birthday.

Gehrig often wrote letters to Eleanor, and in one such note written shortly afterwards, said (in part):

The bad news is lateral sclerosis, in our language chronic infantile paralysis. There isn't any cure... there are very few of these cases. It is probably caused by some germ...Never heard of transmitting it to mates... There is a 50-50 chance of keeping me as I am. I may need a cane in 10 or 15 years. Playing is out of the question... [cite web |url=http://moregehrig.tripod.com/id3.html |title=More About His ALS Battle |accessdate=2008-04-16 |last=Kaden |first=S. |coauthors= |date=2002 |work= |publisher=]

Following Gehrig's visit to the Mayo Clinic, he briefly rejoined the Yankees in As his train pulled into Union Station, he was greeted by a group of s, happily waving and wishing him luck. Gehrig waved back, but he leaned forward to his companion, a reporter, and said, "They're wishing me luck — and I'm dying."

"The Luckiest Man on the Face of the Earth"

On , the New York Yankees announced Gehrig's retirement and proclaimed , Baseball Year|1939, "Lou Gehrig Appreciation Day" at Yankee Stadium. Between games of the Independence Day doubleheader against the Washington Senators, the poignant ceremonies were held on the diamond. In its coverage the following day, "" said it was "Perhaps as colorful and dramatic a pageant as ever was enacted on a baseball field [as] 61,808 fans thundered a hail and farewell".

Yankees Manager Joe McCarthy, struggling to control his emotions, then spoke of Lou Gehrig, with whom there was a close, almost father and son-like bond. After describing Gehrig as "the finest example of a ballplayer, sportsman, and citizen that baseball has ever known", McCarthy could stand it no longer. Turning tearfully to Gehrig, the manager said, "Lou, what else can I say except that it was a sad day in the life of everybody who knew you when you came into my hotel room that day in Detroit and told me you were quitting as a ballplayer because you felt yourself a hindrance to the team. My God, man, you were never that."

The Yankees retired Gehrig's uniform number "4", making him the first player in history to be accorded that honor.

Idol of cheering millions, Records are yours by sheaves; Iron of frame they hailed you Decked you with laurel leaves.

But higher than that we hold you, We who have known you best; Knowing the way you came through Every human test.

Let this be a silent token Of lasting Friendship's gleam, And all that we've left unspoken; Your Pals of the Yankees Team."

Source: [http://moregehrig.tripod.com/id12.html "The Day He Retired", S. Kaden, 2003] ] The trophy cost only about $5, but it became one of Gehrig's most prized possessions.