Chemda Khalili (Persian : چمداخلیلی born December 2, 1975) is a New York-based singer-songwriter. She was born to an Iraqi mother and Iranian father of Jewish descent in Tel Aviv, Israel.

In 1995, Chemda made her first professional recording appearance on reggae musician Dr. Israel's second album. In 1996, she toured as the lead singer and choreographer for the dance group Mighty Dub Katz, appearing on Canada's Much Music. During that same year Chemda was the vocalist of the hit song "Where Did Your Love Go" by Rhythm 544. Between 1997 and 1999, Chemda received some airplay (under the name Caprice) on radio station WKTU with "There Goes Your Heart". She also sung with comedian Jeffrey Ross in an appearance on Comedy Central.

Chemda worked with Rhys Fulber (formerly of Front Line Assembly), where she worked on the 2002 self titled album Conjure One. Chemda sings on four of Conjure One's tracks, and she co-wrote two of the songs (one of which was licensed to ESPN and played on its year-end sports program in early 2002, the other licensed to EA Sports for FIFA 2002. That same track, "Redemption", was remixed by Max Graham and has been distributed on several records. Chemda completed a United States and Canadian tour as the solo vocalist for Conjure One. 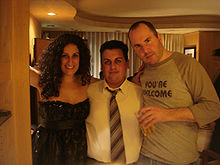 In the spring of 2006, Chemda toured with Dreadtone International in Europe.

Keith and The Girl

With her ex-boyfriend Keith Malley, a standup comedian and comedic author, she is the co-host of the Keith and The Girl talk show, a top-ranking podcast since 2005.[citation needed] Chemda's website features "Surrender", a single that (according the website) is still a work in progress and is free to download. This song was featured on the first episode of Keith and the Girl. On Episode 689 of Keith and the Girl, Chemda stated that she did have musical projects in the future in mind, including a solo career.

Chemda starred in the Gypsy Rock musical Viva Patshiva! from March to May 2009. Due to its success, another production on a larger scale is in the works. Chemda has mentioned on Keith and The Girl that she has seen a script of the new production and that the changes and additions are exciting, including a more well-rounded arc for her character, Zazu. Additionally, Chemda became romantically involved with co-star, and now-girlfriend, Lauren Hennessy (Paprika in the show).

As half of the dynamic talk show host duo, Keith and The Girl, Chemda recently released a CD of prank phone calls named, Clowned By The Girl.

In addition, Chemda and co-host, Keith Malley released in March 2010 a relationship book entitled, What Do We Do Now?