Note: the Small White species of butterfly is commonly called a "cabbage moth" in North America.

The Cabbage Moth (Mamestra brassicae) is a common European moth of the family Noctuidae. 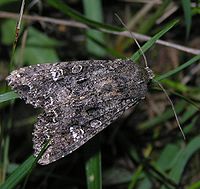 This species varies considerably in size, with a wingspan of 34–50 mm. The forewings are brown and mottled with a prominent white-edged stigma and a broken white sub terminal line.[1][2] The hind wings are grey, darker towards the termen. The prominent spur on the tibia of the foreleg is a diagnostic feature, though is best viewed with a magnifying lens. This moth has a rather complex life history: two or three broods are produced each year and adults can be seen at any time from May to October, occasionally at other times [1]. It flies at night and is attracted to light, sugar and nectar-rich flowers.

The larva is green, khaki, grey-brown or brown with dark spots.[1][2] The topside is darker than the bottom side and a yellow or light brown stripe goes round the middle portion by the spots.[1][2] They grow to about an inch long before pupating, As the common and scientific names suggest, it can be a pest of cultivated brassicas and sweet peas, but it feeds on a wide range of other plants (see list below).[2] Due to its complex life history, this species overwinters either as a larva or a pupa. 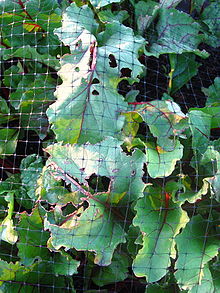