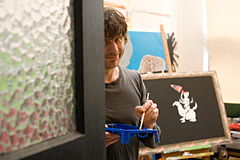 Kamagurka, aka Luc Zeebroek, (Nieuwpoort, Belgium, 5 May 1956) is a Belgian cartoonist, playwright and television producer, known for the absurd nature of his work. He has a big variety of comic figures, but "Bert en Bobje" are the most well-known. He also writes the scenarios for Herr Seele's comic, Cowboy Henk.

Kamagurka studied Art in Bruges and later performed studies at the Royal Academy of Fine Arts in Ghent. However, he quit school before he would graduate.

During a schooltrip in Paris Kamagurka decided to go to the editorial building of the magazine Hari Kiri. Only twenty years old, he ended up going there every two weeks to stay there for three days. Kamagurka still believes this to be his true education and the foundation of the rest of his career. 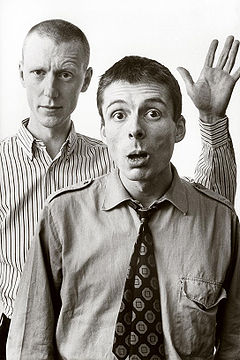 In 1972 he made his debut as cartoonist in De Zeewacht. Three years later he became the regular cartoonist at the weekly magazine HUMO, where he introduced cartoons inspired by the absurd and shocking comics and cartoons of Robert Crumb, Roland Topor and the controversial French magazine Hara Kiri. In those first years the magazine received dozens of critical letters of readers in which Kamagurkas cartoons were attacked because people didn't understand them or because they saw them as too "vulguar". This made him a cultfigure. Until this day he is still one of the main cartoonists of the magazine.

Since the 1980s he also made a few cartoons with Herr Seele, with whom he also made several radio ("Studio Kafka", "Kamagurkistan") and televisionshows (like "Lava", "Johnnywood", "Wees blij met wat je hebt" and "Bob en George"). since 1981 they also make the comic Cowboy Henk, with Kamagurka responsible for the jokes and Seele making the drawings.

Kamagurka also paints and performs theater throughout Flanders and The Netherlands.

In 1985 he received the Geuzenprijs for his entire oeuvre.[1]

Since from 2002 he paid large contributions to De Laatste Show. In 2005 he also had a theater production with Jules Deelder: "Kamadeeldra".

Since 2006 he has been making television for "Man bijt Hond" with his show De grens.

In 2008 Kamagurka does a huge artproject called "Kamalmanak". The idea is that he makes a painting for each day in 2008, which is a leap year so in the end it will result in 366 paintings. The project is sponsored by the businessman Marc Coucke, member of the board of directors of the company Omega Pharma. Coucke is not only an artlover but also a big admirer of the art of Luc Zeebroek.

During the Kamalmanak project he started to make short movies for the digital Dutch site NRC TV. While filming one of these short films he invented a new art movement called Accidentalism.

He has changed the art of portraits by what he calls 'Accidentalism'. It goes as follows: Kamagurka paints a portrait of someone he sees in his mind. Then he shows this portrait on television, in newspapers, on the internet..with the following questions: "Is this you ?" or "Do you know somebody who looks like this portrait ?" As evidence the person who has been painted by accident can send a picture. The person who looks most like the painted portrait is by the artist officially claimed as the portrayed one. That's how accidentalism works -par accident- French for accidental or coincidental.[2][3]

In 2008 Kamagurka did a project called Kamalmanak, in which he painted daily a painting, in total 366, because 2008 was a leap-year. It is also the title of the book in which these paintings are pictured. The project was sponsored by business man Marc Coucke, member of the management of the company Omega Pharma. Coucke is an art lover and a big fan of Luc Zeebroek. In these paintings Kamagurka tries to look at the world with an amount of absurdish humour. He got his inspiration of various artart movements, as cubism and pop-art. His intention was to make in this way his international breakthrough.

He kept on painting after this in the same style, but with the slight difference that he kept on painting every day, but not necessarily finished a painting daily. He made a serial which he called "Veluxart", because the theme he painted was always close to a roof window. He painted a number of characters of comics (such as Tintin, The Smurfs, Batman) and comic action movie characters (Mickey Mouse, Goofy, Popeye, Fred Flintstone, Mijnheer de Uil) in a style which he typed as Neo-cubism. He tried to imagine how Picasso, Georges Braque or Juan Gris would have treated these subjects.

Another kind of art he practiced was called "Accidentalisme" (Accidentally made). He created a portrait of an unknown person, as he saw him/her with his own eye. After that he asked live on television after which person this man or woman on the painting looked, and strangely every time there was somebody who could proof these likeness by a photo.

Another series were the "Spiegeleipaintings" (Fried egg paintings: a chicken upon the yolk of a fried egg). He worked further with this theme and changed the chicken by i.e. three crosses on the Golgotha or by another fried egg.

His arts are really varied, with, for example, an official portrait of Queen Beatrix with a stubble. This is, according to the painter, that a queen changes into a king if you wait long enough. In other paintings, he's strongly influenced by Piet Mondriaan or Peter Paul Rubens or he uses the theme of another painter to make an own original work, such as "Déjeuner sur l'herbe" of Édouard Manet, which he transformed into "Déjeuner sous l'herbe".

Various Kamagurka wins already since 1978 uninterruptedly in the category of "Best Painter" according to the readers of Humo. In 2010 he was beaten for the first time by Jonas Geirnaert. He ended number 4 in the top-10. In the comical series Nero by Marc Sleen the title "De Smaragdgroene pletskop" shows a colonel who is called "Kamagurka" (line 71). The group Osdorp Posse sampeled 2003 a part of Kamagurka's Kamiel Kafka to make their track "Sam Sam" on their album "Tegenstrijd". Since its youth Kamagurka is a fan of the football squad KV Oostende, in which he's in the Board of Directors. In 2009 he got a stadium prohibit of three months because he had entered the playing field during the game in March 2009.