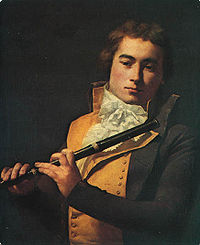 François Devienne (January 31, 1759 – September 5, 1803) was a French composer and professor for flute at the Paris Conservatory.

François Devienne was born in Joinville (Haute-Marne), as the youngest of fourteen children of a saddlemaker. After receiving his first musical training as a choirboy in his hometown, he was playing in various Parisian ensembles as soloist and orchestra player. He studied the flute with Félix Rault and in 1780 he joined the household of Cardinal de Rohan. He was active in Paris as a flautist, bassoonist and composer, and played bassoon at the Paris Opera. He wrote successful operas in the 1790s, including Les visitandines (1792) which brought him much success.

He was also a member of the 'Military Band of the French Guard' where he was given the rank of sergeant with the duty of teaching the children of his colleagues in the military band in its Free School of Music. After the Revolutionary period, when Free School became the National Institute of Music, later chartered as the Paris Conservatory in 1795, François Devienne was appointed an administrator and flute professor. He wrote an important Flute School 'Méthode de Flûte Théorique et Pratique' (1793), which was reprinted several times and did much to improve the level of French wind music in the late 18th century. Like many other musicians, he joined the freemasons and 'Concerts de la Loge Olympique' orchestra.

Devienne died at a sanatorium in Charenton near Paris on September 5, 1803.

His output comprises c. 300 instrumental works that are mostly written for wind instruments. There are a dozen flute concertos, sinfonias for woodwinds, quartets and trios for different ensembles, 12 operas, 5 bassoon concertos, and 6 bassoon sonatas.

Devienne’s compositions for flute, revived by Jean-Pierre Rampal in the 1960s, are now better known to flautists, but still not to the public at large. As well as extensive educational work, including the well-known Méthode of 1794, with its extremely interesting articles on technique and style of the time, his collected work also includes eight books of sonatas for flute or bassoon, a variety of chamber music and no less than seventeen concertos. The brilliant and melodic style of these last makes them perfect examples of the concertante classical genre, comparable only to work by the Viennese composer Franz-Anton Hoffmeister (1754- 1812), who himself wrote some 25 concertos for flute.

Devienne’s concertos, however, are, remarkably enough, frequently closer to the spirit of Mozart, who while in Paris had attended the Concerts spirituels. It was there that Devienne frequently, and with great success, played his compositions, which were brilliant reflections of the elegant tone of Paris at the time. Concerto No. 2 in D major is an example of grace and balance, two characteristics to be found in the fine portrait of the composer by Jacques-Louis David, qualities which are associated with Mozart, explaining why Devienne was called the French Mozart.

François Devienne is an ancestor of Tonino Devienne [1].