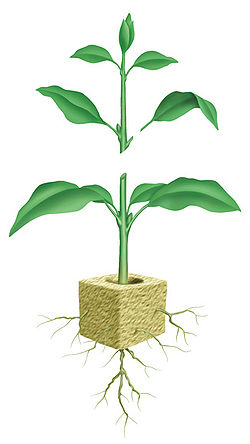 Plant cuttings can be taken by cutting a stem of a plant, or a single leaf.

Plant cutting, also known as striking or cloning, is a technique for vegetatively (asexually) propagating plants in which a piece of the source plant containing at least one stem cell is placed in a suitable medium such as moist soil, potting mix, coir or rock wool. The cutting produces new roots, stems, or both, and thus becomes a new plant independent of the parent.

Typically, striking is a simple process in which a small amount of the parent plant is removed. This removed piece, called the cutting, is then encouraged to grow as an independent plant.

Since most plant cuttings will have no root system of their own, they are likely to die from dehydration if the proper conditions are not met. To have a reasonable chance of success, the cutting should have:

If the plant is unlikely to grow, even with the above conditions met, you can administer a rooting hormone to "encourage" the plant to grow and mature.

After cuttings are placed in the medium, they are watered thoroughly with a fine mist, such as from a nozzle sprayer or a spray mister bottle. After the initial watering, the medium is allowed to almost dry out before misting again, with the aim to keep the soil moist but not wet and waterlogged. A fine mist is used to avoid disturbing plants.

In addition, the cutting needs to be taken correctly; this means:

Though not essential, several compounds may be used to promote the formation of roots through the signaling activity of plant hormone auxins, and is helpful with especially hard plant species. Among the commonly used chemicals is indole-3-butyric acid (IBA) used as a powder, liquid solution or gel. This compound is applied either to the cut tip of the cutting or as a foliar spray. Rooting hormone can be manufactured naturally - one method is to soak the yellow-tipped shoots of a weeping willow tree in water, or to prepare a tea from the bark of a willow tree. When using the shoots or bark, they should be soaked for 24 hours prior to using.[1] Honey, though it does not contain any plant hormones, can also make an effective rooting substance.

Some plants form roots much more easily. Most succulent cuttings can be left on a table and small roots will form, and some other plants can form roots from having their cuttings placed in a cup of water. 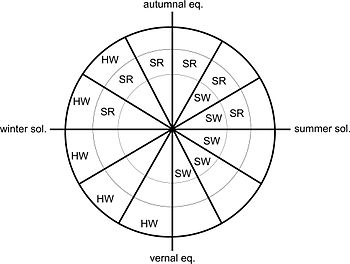 Many vegetative parts of a plant can be used. The most common methods are:-

Although some species, such as willow, blackberry and pelargoniums can be grown simply by placing a cutting into moist ground, the majority of species require more attention. Most species require humid, warm, partially shaded conditions to strike, thus requiring the approach above to be followed. Particularly difficult species may need cool air above and warm soil. In addition, with many more difficult cuttings, one should use the type of cutting that has the most chance of success with that particular plant species.[4]

Depending on the type of soil being used, several additives may need adding to create good soil for cuttings. These additions may include:

For example with plain potting soil, a third of the container should be filled with sand, to make suitable soil for cuttings.

A white plastic greenhouse, used to keep the cuttings humid

Although several options can be used here, usually semi-white plastic is used to cover the cuttings. The soil below and from the cuttings themselves is kept moist, and should be aerated once in a while to prevent formation of molds.