Among the variety of ways cannabis is consumed, most are some form of smoking or oral consumption.

Cannabis can be vaporized or smoked with implements such as bongs and pipes. Many people can create a makeshift bong or pipe out of an apple or soda can. They can also roll a cigarette-like joint or cigar-like blunt. 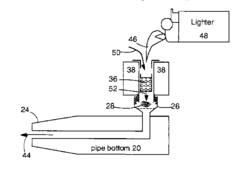 A vaporization pipe with flame filter.
28. Insert cannabis, other herbs or essential oils here
36. Flame filter prevents flame from igniting herb which instead is heated to vaporization temperature.

A vaporizer heats herbal cannabis to 185–210 degrees Celsius (365–410 °F), which causes the active ingredients to evaporate into a gas without burning the plant material (the boiling point of THC is 157 °C (315 °F).[2][3] A lower proportion of carbon monoxide and other toxic chemicals is released than by smoking, although this may vary depending on the design of the vaporizer and the temperature at which it is set. A MAPS-NORML study using a Volcano vaporizer reported 95% THC and no toxins delivered in the vapor.[4] However, an older study using less sophisticated vaporizers found some toxins.[5]

As an alternative to smoking, cannabis may be consumed orally. However, the cannabis or its extract must be sufficiently heated or dehydrated to cause decarboxylation of its most abundant cannabinoid, tetrahydrocannabinolic acid, into psychoactive THC.[6]

Various types of cannabis foods on display in a shop window in Amsterdam.

Although hashish is sometimes eaten raw or mixed with water, THC and other cannabinoids are more efficiently absorbed into the bloodstream when combined with butter and other lipids or, less so, dissolved in ethanol.[citation needed] The time to onset of effects depends strongly on stomach content, but is usually about an hour, and may continue for a considerable length of time, whereas the effects of smoking herbal cannabis are almost immediate, lasting a shorter time.[citation needed]

Smoking cannabis results in a significant loss of THC and other cannabinoids in exhaled smoke, by decomposition in high-temperature burning and, with a joint or large-bowl utensil, in smoke that escapes and is not inhaled. In contrast, all of the active constituents enter the body when cannabis is ingested. It has been shown that the primary active component of cannabis, Δ9-THC, is converted to the more psychoactive 11-hydroxy-THC by the liver.[7] Titration to the desired effect by ingestion is more difficult than through inhalation, due to the long onset time for the effects.

Cannabis material can be leached in high-proof spirits (often grain alcohol) to create a “Green Dragon”. This process is often employed to make use of low-potency stems and leaves.[citation needed]

Cannabis can also be consumed as a cannabis tea. Although THC is lipophilic and only slightly water soluble (with a solubility of 2.8 mg per liter),[8] enough THC can be dissolved to make a mildly psychoactive tea. However, water-based infusions are generally considered to be an inefficient use of the herb.[9]

To kill potentially dangerous Aspergillus and other microorganisms, researchers "Levitz and Diamond (1991) suggested baking marijuana in home ovens at 150 °C (302 °F), for five minutes before smoking. Oven treatment killed conidia of A. fumigatus, A. flavus, and did not degrade the active component of marijuana, tetrahydrocannabinol (THC)." However neither this nor some other suggested sterilization methods degrade microbial antigens or decompose the microbial toxins. Note that many cannabinoids evaporate below 150 °C (302 °F).[10]