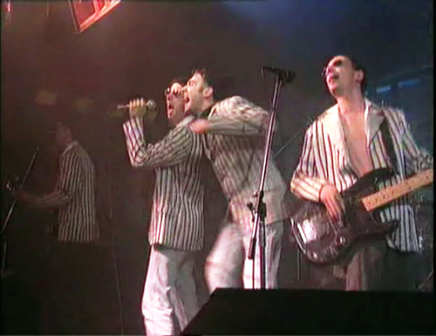 
Familija (: Фамилија) was a supergroup from , consisting of , Košava and members. The band's musical style was a combination of , pop and .

In 1994 and Košava members Aleksandar "Vasa" Vasiljević (guitar) and Aleksandar "Luka" Lukić (guitar) with former members Dejan "Peja" Pejović (vocals), Dejan "Dexi" Petrović (vocals) and drummer Goran " Gedža" Redžepi formed Familija, a band in which they would play music different than the one played in their own bands.

During the same year the band released their debut album, "Narodno pozorište" ("People's Thetare") , released by . Pejović, Vasiljević and Lukić wrote all the songs, featuring a variation of musical styles combined with sound. Notable tracks on the album are "Baltazar" (which was a cover of "" theme song), "Mala, mala", "Što ja volim taj seks" and "Nije mi ništa". The track "Tajna Nina" fearutes lyrics from the track "Yellow Submarine". The record was produced by Đorđe Petrović who also played keyboards and the cover was designed by Saša "Madoženja" Marković. After the album release Redžepi left the band and started working as a manager, and was replaced by former and U Škripcu drummer Ratko Ljubičić. The band also appeared in the moive "Dva sata kvalitetnog TV programa" as one of the performers at the New Year’s Eve party.

Durring mid the band released a CD single featuring two songs, "Brate Murate" (a cover of track "Trla baba lan") and "Ringišpil", the former appearing on their next album "Seljačka buna" ("Peasants' Uprising"), released in . The album, like the previous, was produced by Đorđe Petrović and featured "Paranoja", "Hepi hipi", "Niš, Pariz, Teksas", stylistically similar to the previous record. The album and the single were released by Komuna.

In due to financial problems, the band ceased to exist and Dejan Petrović with his brother Nenad (Mušterije member) formed the band Centrala. The band's style is a combination of with rock. They recorded material for a debut album but had problems with finding a record label. Dejan Pejović Peja with former Hush bassist Milan Šarić and guitarist Jova Jović Joca formed The Dibidus in . The band released one album for BK Sound and disbanded.