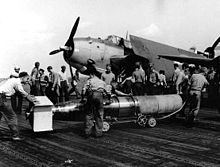 A Mark 13B torpedo is loaded onto a TBF Avenger aboard the Wasp in 1944. The torpedo is fitted with breakaway wooden nose and tail protection which is shed upon hitting the water.

The Mark 13 was very similar in design to the Mark 14 and Mark 15 torpedoes which suffered from problems such as submerged running approximately ten feet lower than set, contact exploder duds and magnetic trigger premature explosions. The Mark 13 design avoided these problems with its larger diameter, lesser mass, lesser negative buoyancy, slower running speed and the lack of a magnetic influence feature in its Mark IV exploder.[5]

At the close of the war, the Mark 13 was considered one of the most reliable air-dropped torpedoes available.