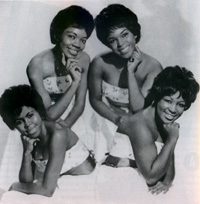 The Shirelles were an American in the early 1960s, and the first to have a number one single on the . The members of the quartet were (the main lead singer; later known as Shirley Alston, then Shirley Alston Reeves), (later known as Doris Coley Kenner, then Doris Kenner Jackson; she sang lead on "", "Welcome Home Baby", "Blue Holiday" and a number of 'b' sides and album cuts), , and . The quartet formed in in 1958, and went on to release a string of hits including "Baby It's You" (written by //Barney Williams), "Mama Said", "Foolish Little Girl", and the #1 Pop hits "" (/) and "Soldier Boy" (/). Their "Sha La La" became an international hit when covered by the UK/British group , giving them a Top 5 hit in 1965, and the song "Boys" was covered by . The Beatles also covered "" on their album "Please, Please Me" in 1963. A year later, this same Burt Bacharach/ Hal David song was also a Top 30 hit in the UK for Sheffield-born singer Dave Berry.

The Shirelles were the first major female vocal group of the rock and roll era, defining the so-called girl group sound with their soft, sweet harmonies and yearning innocence. Their music was a blend of pop and R&B, especially and smooth uptown soul that appealed to listeners across the board, before became a crossover phenomenon with white audiences. Though preceded them by several years, their international success was unprecedented, as they hit in England, too; their inviting musical blueprint had an enduring influence not just on their immediate followers, but on future generations of female pop singers, who often updated their songs without losing their initial appeal. In addition, they provided some of the earliest hits for important songwriters like Gerry Goffin & Carole King, Burt Bacharach & Hal David, and .

The Shirelles were originally formed in 1958 in by four friends: Shirley Owens Alston Reeves, Doris Coley Kenner Jackson, Addie "Micki" Harris McPherson, and Beverly Lee. Students at , they christened themselves 'the Poquellos', wrote a song called "I Met Him on a Sunday," and entered their school talent show with it, singing it a cappella. A school friend had them audition for her mother, Florence Greenberg, who ran a small record label; she was impressed enough to become the group's manager, and changed their name to The Shirelles by combining frequent lead singer Shirley's first name with doo-woppers the Chantels. The Shirelles' recording of "I Met Him on a Sunday" was licensed by Decca and climbed into the national Top 50 in 1958. Two more singles flopped, however, and Decca passed on further releases. Greenberg instead signed them to her new label, , and brought in producer Luther Dixon, whose imaginative, sometimes string heavy arrangements would help shape the group's signature sound.

"" (1959), a song they learned by heart after seeing perform in a show they did together and "Tonight's the Night" (1960) both failed to make much of an impact on the pop charts, although the latter was a Top 20 R&B hit and Top 40 Pop hit. However, they broke big time with the Goffin-King composition "Will You Love Me Tomorrow"; released in late 1960, it went all the way to number one pop, making them the first all-female group of the rock era to accomplish that feat; it also peaked at number two R&B. In the UK, this same song reached the Top 5 pop chart in 1961. Its success helped send a re-release of "Dedicated to the One I Love" into the Top 5 on both the pop and R&B charts in 1961 [US] , and "Mama Said" did the same. A more R&B flavored outing, "Big John," also went to #2 that year. 1962 continued their run of success, most notably with "Soldier Boy," a Luther Dixon/Florence Greenberg tune that became their second pop #1; they also had a Top 10 pop and R&B hit with "Baby It's You". Dixon subsequently left the label; the Shirelles managed to score one more pop/R&B Top Ten with 1963's "Foolish Little Girl", which reached #4 on the pop chart and #9 R&B, but found it difficult to maintain their previous level of success. "Soldier Boy" also reached the Top 30 in the UK in 1962.

The group went on to record material for the film "", headlined the first integrated concert show in , and helped a young get some of her first exposure (subbing for Reeves and Jackson when each took a leave of absence to get married). A money dispute with Scepter tied up their recording schedule for a while in 1964, and although it was eventually settled, The Shirelles were still bound to a label where their run was essentially over. This was also due in part to the , whose bands were among the first to cover their songs; not only their hits, but lesser-known items like "Boys" (the Beatles) and "Sha La La" (a hit for Manfred Mann). Some of the classic covers of the Shirelles tunes, besides the ones mentioned above include: "Dedicated to the One I Love" by The Temprees, and later the , "Baby It's You" by , and "Will You Love Me Tomorrow?" by . Shortly after its release, did a very interesting answer song to "Will You Love Me Tomorrow?" entitled, "Not Just Tomorrow, But Always". [available on the CD "The Answer To Everything: Answer Songs Of The '60's"] .

The Shirelles scraped the lower reaches of the charts a few more times, making their last appearance, ironically, with 1967's "Last Minute Miracle". Jackson left the group the following year to remarry and raise her family, and the remaining Shirelles continued as a trio, cutting singles for Bell Records as "Shirley and the Shirelles", , and through 1971. The group continued to tour the oldies circuit, however, and appeared in the 1973 documentary "Let the Good Times Roll". Shirley Alston Reeves left for a solo career in 1975, upon which point Doris Jackson returned. Reeves recorded both as 'Lady Rose' (on the Scepter subsidiary) and Shirley Alston for moonlighting Motown executive ' Prodigal label until the label was purchased by Motown. That year, she recorded the album "With A Little Help From My Friends", in which such rock-and-roll luminaries as , , Lala Brooks of , , , and sang along with Reeves.

Doris took a leave of absence from 1979 to 1982 and was replaced by Louise Bethune. Shortly after Doris returned, Micki Harris died of a heart attack during a performance in Atlanta on June 10 1982. She was replaced by a returning Louie Bethune. By 1986, the group split, and the two originals formed their own groups: Coley fronting one group along with Fanita James and Gloria Jones of and occasionally, Carolyn Willis formerly of ; and Beverly Lee fronting the other (which featured Eloise Whittiker). Various groups claiming to be the Shirelles had been touring the oldies circuit in the '90s, so one group agreed to tour the West Coast while the other toured the East Coast. This meant that promoters would look for an authentic Shirelle to be featured in the group. They reunited briefly for a program honoring them at the high school they attended in Passaic, New Jersey and sang background on Dionne Warwick's 1983 recording of "Will You Love Me Tomorrow?", found on her "How Many Times Can We Say Goodbye?" album. They had previously sung background for her on the song "Get Rid Of Him", an answer to their own "Foolish Little Girl", on Warwick's 'Make Way For Dionne Warwick' album.

The Shirelles made a special guest appearance on 's 1996 album "A Man Amongst Men", singing background vocals on the tracks "Bo Diddley Is Crazy", "Hey Baby" and "Oops! Bo Diddley".

Beverly Lee eventually secured the official trademark for the group's name. The members of the group have also been lifelong activists in the fight for royalty reform, medical coverage, and fair treatment of and recognition for pioneering artists. They were officially inducted into the in 1996. In 2004, ranked them #76 on their list of the [http://www.rollingstone.com/news/story/5939214/the_immortals_the_first_fifty/ 100 Greatest Artists of All Time] . [cite web| title = The Immortals: The First Fifty| work = Rolling Stone Issue 946| publisher = Rolling Stone| url =http://www.rollingstone.com/news/story/7248611/76_the_shirelles] "Will You Love Me Tomorrow?" (#125) and "Tonight's the Night" (401) both made Rolling Stone's list of The 500 Greatest Songs of All Time.

Doris Jackson died at the age of 58 from breast cancer in Sacramento, California, on February 4, 2000. Following her death, James and Jones reformed the Blossoms.