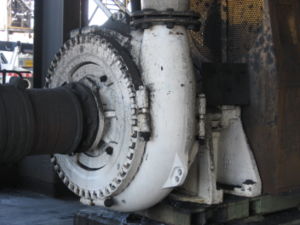 A centrifugal pump is a rotodynamic pump that uses a rotating impeller to create flow by the addition of energy to a fluid. Centrifugal pumps are commonly used to move liquids through piping. The fluid enters the pump impeller along or near to the rotating axis and is accelerated by the impeller, flowing radially outward into a diffuser or volute chamber (casing), from where it exits into the downstream piping. Centrifugal pumps are used for large discharge through smaller heads.

According to Reti, the Brazilian soldier and historian of science, the first machine that could be characterized as a centrifugal pump was a mud lifting machine which appeared as early as 1475 in a treatise by the Italian Renaissance engineer Francesco di Giorgio Martini.[1] True centrifugal pumps were not developed until the late 17th century, when Denis Papin made one with straight vanes. The curved vane was introduced by British inventor John Appold in 1851. 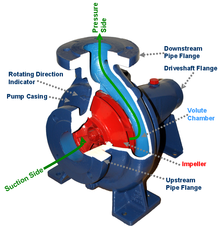 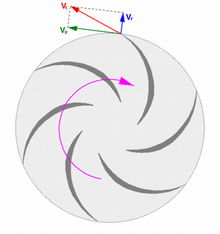 Like most pumps, a centrifugal pump converts mechanical energy from a motor to energy of a moving fluid; some of the energy goes into kinetic energy of fluid motion, and some into potential energy, represented by a fluid pressure or by lifting the fluid against gravity to a higher level.

For more details on this topic, see Centrifugal compressor.

In the modern centrifugal pump, most of the energy conversion is due to the outward force that curved impeller blades impart on the fluid. Invariably, some of the energy also pushes the fluid into a circular motion, and this circular motion can also convey some energy and increase the pressure at the outlet. The relationship between these mechanisms was described, with the typical mixed conception of centrifugal force as known as that time, in an 1859 article on centrifugal pumps, thus:[2]

To arrive by a simpler method than that just given at a general idea of the mode of action of the exterior whirlpool in improving the efficiency of the centrifugal pump, it is only necessary to consider that the mass of water revolving in the whirlpool chamber, round the circumference of the wheel, must necessarily exert a centrifugal force, and that this centrifugal force may readily be supposed to add itself to the outward force generated within the wheel; or, in other words, to go to increase the pumping power of the wheel. The outward force generated within the wheel is to be understood as being produced entirely by the medium of centrifugal force if the vanes of the wheel be straight and radial; but if they be curved, as is more commonly the case, the outward force is partly produced through the medium of centrifugal force, and partly applied by the vanes to the water as a radial component of the oblique pressure, which, in consequence of their obliquity to the radius, they apply to the water as it moves outwards along them. On this subject it is well to observe that while the quantity of water made to pass through a given pump with curved vanes is perfectly variable at pleasure, the smaller the quantity becomes the more nearly will the force generated within the wheel for impelling the water outwards become purely centrifugal force, and the more nearly will the pump become what the name ordinarily given to it would seem to indicate—a purely centrifugal pump. When, however, a centrifugal pump with vanes curved backwards in such forms as are ordinarily used in well-constructed examples of the machine, is driven at a speed considerably above that requisite merely to overcome the pressure of the water, and cause lifting or propulsion to commence, the radial component of the force applied to the water by the vanes will become considerable, and the water leaving the circumference of the wheel will have a velocity less than that of the circumference of the wheel in a degree having some real importance in practice.

The statement "the mass of water ... must necessarily exert a centrifugal force" is interpretable in terms of the reactive centrifugal force—the force is not an outward force on the water, but rather an outward force exerting by the water, on the pump housing (the volute) and on the water in the outlet pipe. The outlet pressure is a reflection of the pressure that applies the centripetal force that curves the path of the water to move circularly inside the pump (in the space just outside the impeller, the exterior whirlpool as this author calls it). On the other hand, the statement that the "outward force generated within the wheel is to be understood as being produced entirely by the medium of centrifugal force" is best understood in terms of centrifugal force as a fictional force in the frame of reference of the rotating impeller; the actual forces on the water are inward, or centripetal, since that's the direction of force need to make the water move in circles. This force is supplied by a pressure gradient that is set up by the rotation, where the pressure at the outside, at the wall of the volute, can be taken as a reactive centrifugal force. This is typical of 19th and early 20th century writing, to mix these conceptions of centrifugal force in informal descriptions of effects such as that in the centrifugal pump. 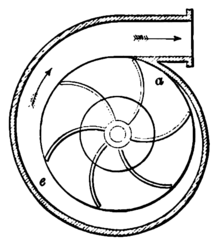 John Richards's drawing of a theoretical shape for the volute casing around the impeller, which he calls a "mistake" due to the constriction at a

Differing conceptions and explanations of how a centrifugal pump works have long engendered controversy and animadversion. For example, the American Expert Commission sent to the Vienna Exposition in 1873 issued a report that included observations that "they are misnamed centrifugal, because they do not operate by centrifugal force at all; they operate by pressure the same as a turbine water wheel; when people understand their method of operating we may expect much improvement." John Richards, editor of the San Francisco-based journal Industry, in his in-depth essay on centrifugal pumps, which also downplayed the signficance of centrifugal force in the working of the pump, remarked:[3]

This extraordinary report stands printed in a Government publication, signed by men who were, or are, eminent in mechanics, and we can only deplore the stupidity, as well as presumption of the commission who thus disposed of a subject that had twenty years before been carefully investigated by such men as Sir John Rennie, Professor Cowper, Mr. Whitelaw, Dr. James Black, Professor Rankine, and many others. The most astonishing part is, however, that this report was passed and signed by men who we can hardly suppose would fail to perceive its absurdity.

Vertical centrifugal pumps are also referred to as cantilever pumps. They utilize a unique shaft and bearing support configuration that allows the volute to hang in the sump while the bearings are outside of the sump. This style of pump uses no stuffing box to seal the shaft but instead utilizes a "throttle Bushing". A common application for this style of pump is in a parts washer.

If we need higher pressure at the outlet we can connect impellers in series.

If we need a higher flow output we can connect impellers in parallel.

All energy added to the fluid comes from the power of the electric or other motor force driving the impeller.

Unless carefully designed, installed and monitored, pumps will be, or will become inefficient, wasting a lot of energy. Pumps need to be regularly tested to determine efficiency.

The energy usage in a pumping installation is determined by the flow required, the height lifted and the length and friction characteristics of the pipeline. The power required to drive a pump (Pi), is defined simply using SI units by: 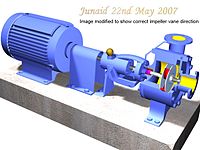 Pi is the input power required (W)
ρ is the fluid density (kg/m3)
g is the standard acceleration of gravity (9.80665 m/s2)
H is the energy Head added to the flow (m)
Q is the flow rate (m3/s)
η is the efficiency of the pump plant as a decimal

The head added by the pump (H) is a sum of the static lift, the head loss due to friction and any losses due to valves or pipe bends all expressed in metres of fluid. Power is more commonly expressed as kilowatts (103 W, kW) or horsepower (hp = kW*0.746). The value for the pump efficiency, ηpump, may be stated for the pump itself or as a combined efficiency of the pump and motor system.

The energy usage is determined by multiplying the power requirement by the length of time the pump is operating.

An oilfield solids control system needs many centrifugal pumps to sit on or in mud tanks. The types of centrifugal pumps used are sand pumps, submersible slurry pumps, shear pumps, and charging pumps. They are defined for their different functions, but their working principle is the same.

Small centrifugal pumps (e.g. for garden fountains) may be magnetically coupled to avoid leakage of water into the motor. The motor drives a rotor carrying a pair of permanent magnets and these drag round a second pair of permanent magnets attached to the pump impeller. There is no direct connection between the motor shaft and the impeller so no gland is needed and, unless the casing is broken, there is no risk of leakage.

Most centrifugal pumps are not self-priming. In other words, the pump casing must be filled with liquid before the pump is started, or the pump will not be able to function. If the pump casing becomes filled with vapors or gases, the pump impeller becomes gas-bound and incapable of pumping. To ensure that a centrifugal pump remains primed and does not become gas-bound, most centrifugal pumps are located below the level of the source from which the pump is to take its suction. The same effect can be gained by supplying liquid to the pump suction under pressure supplied by another pump placed in the suction line.