Discovery and exploration of the Solar System

Discovery and exploration of the Solar System

The Sun and planets of the Solar System. (Pluto is now classed as a dwarf planet, and is not shown). The relative sizes of objects are drawn to scale; the distances between them are not.

For many thousands of years,[clarification needed] civilizations, with a few notable exceptions,[clarification needed] did not recognize the existence of the Solar System. It was believed the Earth to be stationary at the centre of the universe and categorically different from the divine or ethereal objects that moved through the sky. While the Indian mathematician-astronomer Aryabhata and the Greek philosopher Aristarchus of Samos had speculated on a heliocentric reordering of the cosmos, Nicolaus Copernicus first developed a mathematically predictive heliocentric system[when?]. His 17th-century successors Galileo Galilei, Johannes Kepler, and Isaac Newton developed an understanding of physics which led to the gradual acceptance of the idea that the Earth moves round the Sun and that the planets are governed by the same physical laws that governed the Earth. In more recent times, this led to the investigation of geological phenomena such as mountains and craters and seasonal meteorological phenomena such as clouds, dust storms and ice caps on the other planets.

See also: Timeline of discovery of Solar System planets and their moons 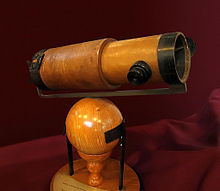 A replica of Isaac Newton's telescope.

The first exploration of the Solar System was conducted by telescope, when astronomers first began to map those objects too faint to be seen with the naked eye.

Galileo Galilei was the first to discover physical details about the individual bodies of the Solar System. He discovered that the Moon was cratered, that the Sun was marked with sunspots, and that Jupiter had four satellites in orbit around it.[1] Christiaan Huygens followed on from Galileo's discoveries by discovering Saturn's moon Titan and the shape of the rings of Saturn.[2] Giovanni Domenico Cassini later discovered four more moons of Saturn, the Cassini division in Saturn's rings.[3] 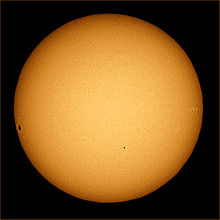 The sun photographed through a telescope with special solar filter. Sunspots and limb darkening can be clearly seen. Mercury is transiting in the lower middle of the Sun's face.

Edmond Halley realised in 1705 that repeated sightings of a comet were recording the same object, returning regularly once every 75–76 years. This was the first evidence that anything other than the planets orbited the Sun.[4] Around this time (1704), the term "Solar System" first appeared in English.[5]

In 1781, William Herschel was looking for binary stars in the constellation of Taurus when he observed what he thought was a new comet. Its orbit revealed that it was a new planet, Uranus, the first ever discovered.[6]

Giuseppe Piazzi discovered Ceres in 1801, a small world between Mars and Jupiter that initially was considered a new planet. However, subsequent discoveries of thousands of other small worlds in the same region led to their eventual reclassification as asteroids.[7]

By 1846, discrepancies in the orbit of Uranus led many to suspect a large planet must be tugging at it from farther out. Urbain Le Verrier's calculations eventually led to the discovery of Neptune.[8] The excess perihelion precession of Mercury's orbit led Le Verrier to postulate the intra-Mercurian planet Vulcan in 1859, but that would turn out to be an irrelevant thesis.

While it is debatable when the Solar System was truly "discovered," three 19th century observations determined its nature and place in the universe beyond reasonable doubt. First, in 1838, Friedrich Bessel successfully measured a stellar parallax, an apparent shift in the position of a star created by the Earth's motion around the Sun. This was not only the first direct, experimental proof of heliocentrism, but also revealed, for the first time, the vast distance between our Solar System and the stars. Then, in 1859, Robert Bunsen and Gustav Kirchhoff, using the newly invented spectroscope, examined the spectral signature of the Sun and discovered that it was composed of the same elements as existed on Earth, establishing for the first time a physical link between the Earth and the heavens.[9] Then, Father Angelo Secchi compared the spectral signature of the Sun with those of other stars, and found them virtually identical. The realisation that the Sun was a star led to the hypothesis that other stars could have systems of their own, though this was not to be proven for nearly 140 years.

Further apparent discrepancies in the orbits of the outer planets led Percival Lowell to conclude that yet another planet, "Planet X", must lie beyond Neptune. After his death, his Lowell Observatory conducted a search which ultimately led to Clyde Tombaugh's discovery of Pluto in 1930. Pluto was, however, found to be too small to have disrupted the orbits of the outer planets, and its discovery was therefore coincidental. Like Ceres, it was initially considered to be a planet, but after the discovery of many other similarly sized objects in its vicinity it was reclassified in 2006 as a dwarf planet by the IAU.[8]

In 1992, the first evidence of a planetary system other than our own was discovered, orbiting the pulsar PSR B1257+12. Three years later, 51 Pegasi b, the first extrasolar planet around a Sunlike star, was discovered. As of 2008, 221 extrasolar systems have been found.[10]

Also in 1992, astronomers David C. Jewitt of the University of Hawaii and Jane Luu of the Massachusetts Institute of Technology discovered (15760) 1992 QB1. This object proved to be the first of a new population, which became known as the Kuiper belt; an icy analogue to the asteroid belt of which such objects as Pluto and Charon were deemed a part.[11][12]

Mike Brown, Chad Trujillo and David Rabinowitz announced the discovery of Eris in 2005, a scattered disc object larger than Pluto and the largest object discovered in orbit round the Sun since Neptune.[13] 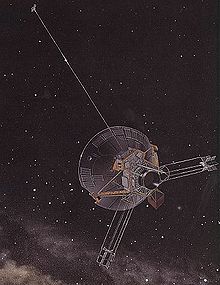 Since the start of the Space Age, a great deal of exploration has been performed by robotic spacecraft missions that have been organized and executed by various space agencies.

All planets in the Solar System have now been visited to varying degrees by spacecraft launched from Earth. Through these unmanned missions, humans have been able to get close-up photographs of all the planets and, in the case of landers, perform tests of the soils and atmospheres of some.

The first artificial object sent into space was the Soviet satellite Sputnik 1, launched in 1957, which successfully orbited the Earth until January 4 the following year.[15] The American probe Explorer 6, launched in 1959, was the first satellite to image the Earth from space.

The first successful probe to fly by another Solar System body was Luna 1, which sped past the Moon in 1959. Originally meant to impact with the Moon, it instead missed its target and became the first artificial object to orbit the Sun. Mariner 2 was the first probe to fly by another planet, Venus, in 1962. The first successful flyby of Mars was made by Mariner 4 in 1965. Mariner 10 first passed Mercury in 1974. 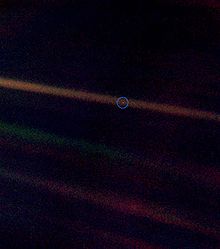 A photo of Earth (circled) taken by Voyager 1, 6.4 billion kilometers (4 billion miles) away. The streaks of light are diffraction spikes radiating from the Sun (off frame to the left). This photograph is known as "Pale Blue Dot".

The first probe to explore the outer planets was Pioneer 10, which flew by Jupiter in 1973. Pioneer 11 was the first to visit Saturn, in 1979. The Voyager probes performed a grand tour of the outer planets following their launch in 1977, with both probes passing Jupiter in 1979 and Saturn in 1980 – 1981. Voyager 2 then went on to make close approaches to Uranus in 1986 and Neptune in 1989. The Voyager probes are now far beyond Neptune's orbit, and are on course to find and study the termination shock, heliosheath, and heliopause. According to NASA, both Voyager probes have encountered the termination shock at a distance of approximately 93 AU from the Sun.[16]

The first flyby of a comet occurred in 1985, when the International Cometary Explorer (ICE) passed by the comet Giacobini-Zinner,[17] while the first flybys of asteroids were conducted by the Galileo space probe, which imaged both 951 Gaspra (in 1991) and 243 Ida (in 1993) on its way to Jupiter.

No Kuiper belt object has yet been visited by a spacecraft. Launched on January 19, 2006, the New Horizons probe is currently en route to becoming the first man-made spacecraft to explore this area. This unmanned mission is scheduled to fly by Pluto in July 2015. Should it prove feasible, the mission will then be extended to observe a number of other Kuiper belt objects.[18]

The first probe to land on another Solar System body was the Soviet Luna 2 probe, which impacted the Moon in 1959. Since then, increasingly distant planets have been reached, with probes landing on or impacting the surfaces of Venus in 1966 (Venera 3), Mars in 1971 (Mars 3, although a fully successful landing didn't occur until Viking 1 in 1976), the asteroid 433 Eros in 2001 (NEAR Shoemaker), and Saturn's moon Titan (Huygens) and the comet Tempel 1 (Deep Impact) in 2005. The Galileo orbiter also dropped a probe into Jupiter's atmosphere in 1995; since Jupiter has no physical surface, it was destroyed by increasing temperature and pressure as it descended.

Manned exploration of the Solar System is currently confined to Earth's immediate environs. The first human being to reach space (defined as an altitude of over 100 km) and to orbit the Earth was Yuri Gagarin, a Soviet cosmonaut who was launched in Vostok 1 on April 12, 1961. The first man to walk on the surface of another Solar System body was Neil Armstrong, who stepped onto the Moon on July 21, 1969 during the Apollo 11 mission; five more Moon landings occurred through 1972. The United States' Space Shuttle, which debuted in 1981, is the only reusable spacecraft to successfully make multiple orbital flights. The five shuttles that have been built have flown a total of 121 missions, with two of the craft destroyed in accidents. The first orbital space station to host more than one crew was NASA's Skylab, which successfully held three crews from 1973 to 1974. The first true human settlement in space was the Soviet space station Mir, which was continuously occupied for close to ten years, from 1989 to 1999. It was decommissioned in 2001, and its successor, the International Space Station, has maintained a continuous human presence in space since then. In 2004, SpaceShipOne became the first privately funded vehicle to reach space on a suborbital flight. That year, U.S. President George W. Bush announced the Vision for Space Exploration, which called for a replacement for the aging Shuttle, a return to the Moon and, ultimately, a manned mission to Mars.