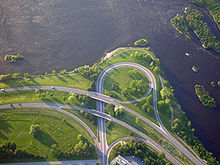 The Ottawa River Parkway is a four-lane scenic parkway along the Ottawa River in Ottawa, Ontario, Canada. It runs from Carling Avenue near Connaught Avenue, to Booth Street at the Canadian War Museum. It is maintained by the National Capital Commission. The speed limit is 60 km/h (37 mph), enforced by the Royal Canadian Mounted Police (RCMP). Bicycles are allowed on the road and on a parallel recreational path along the parkway.

Besides being a scenic route, it serves as a commuter artery for west-end residents who work in the downtown area, particularly government employees who work at the Tunney's Pasture office complex, and other areas. It is also used by the transit systems of Ottawa and Gatineau for express buses.

The Parkway begins with on and off-ramps from Carling Avenue. The interchange is also the site of the Lincoln Fields Transitway station, with access driveways for OC Transpo buses. The Parkway proceeds north, passing under Richmond Road, then curving eastward along the Ottawa River. The Parkway follows the shore, with both directions separated by a grass median. The area along the river is mostly cleared of trees, allowing a view of the River and far shore line. The area to the south is partially forested, separating the roadway from residential areas to the south.

The roadway continues east along the river shore until an signalized intersection with the OC Transpo Transitway. From this point east, the roadway is for the exclusive use of non-commercial vehicles and bicycles. The Parkway follows the river bank to the north, while the Transitway diverges east along an old railway right-of-way.

The next landmark on the Parkway is Kitchissipi Lookout and Beach. The beach is also known as Westboro Beach. The Parkway passes over a pedestrian access walkway from the residential area to the east, with an intersection to the beach parking area. The beach is provided with a pavilion overlooking the River and the beach, which has changing rooms and a restaurant patio.

The Parkway curves east and proceeds to a large intersection with Island Park Drive. Island Park connects north to Gatineau across a series of bridges over the Ottawa River. The intersection's traffic lights are controlled to provide turning signals. Just east of the intersection is another park and lookout area, provided with driveways to a parking lot near the river.

The Parkway continues east until a signalized intersection for access to the Tunney's Pasture campus of the federal government. An extra turning lane is provided to access the large parking lot of the campus. Further east, the Parkway passes over Parkdale Avenue, with on and off-ramps between Parkdale and the Parkway. A signalized intersection is provided to the east providing access to the Mechanicsville neighbourhood to the south, and Lemieux Island and its park and filtration station to the north, along an unnamed roadway. Access to and from the Parkway and this intersection is only allowed during off-peak hours.

It is closed to commercial traffic, so the majority of vehicles are private cars. From Lincoln Fields to Dominion stations, it shares traffic with the Transitway rapid-bus network, as well as STO buses from Gatineau (between Tunney's Pasture and the Champlain Bridge).

On Sundays during summer months (Victoria Day to Labour Day), the Parkway's westbound lanes are closed to motor vehicles and opened to pedestrian and bicycle traffic from 9 am until 1 pm.

The River Parkway was first proposed as part of Greber plans for Ottawa in the 1940s. The parkway was built by purchasing former rail lands along the waterfront, and the purchase of private riverfront houses. The Parkway was designed as a scenic drive, with commercial vehicles prohibited. At the time of its construction, Carling Avenue was part of Ontario Highway 17, and the Parkway provided an alternative, scenic drive to the parliamentary precinct. When the Queensway freeway was constructed the River Parkway was not extended to the Queensway, and access from the Queensway is marked from the Richmond Road interchange.

In the 1990s, the expansion of the bridge at Island Park was a major issue. The National Capital Commission proposed a fully grade-separated interchange to the River Parkway, with a major expansion in capacity of the bridge over the river. Organized opposition in Ottawa to the plans led to a reduced plan by the NCC. The bridge is three lanes, with the direction of the middle lane switched during different hours of the day. The NCC also built a signalized intersection at Tunney's Pasture at the time.

Ottawa has proposed to extend its light rail transit network west from downtown. The light rail network may be constructed along the Parkway, a proposal already creating opposition as of 2010.

The following is a list of exits along the Ottawa River Parkway. Besides intersections and interchanges, numerous riverside park access roads are listed.

†Exits are not numbered.