The Second Republic of South Korea was the government of South Korea for eight months in 1960 and 1961. It succeeded the First Republic, but was followed by a military government under the Supreme Council for National Reconstruction.

The First Republic was overthrown by widespread protests known as the "April Revolution" in April 1960. After its fall, power was briefly held by an interim administration under Heo Jeong.[1] A new parliamentary election was held on July 29, 1960. The Democratic Party, which had been in the opposition during the First Republic, easily gained power and the Second Republic was established. The revised constitution dictated the Second Republic to take the form of a parliamentary cabinet system where the President took only a nominal role. This was the first and the only instance South Korea turned to a cabinet system instead of a presidential system. Yun Po Sun was elected as the President on August 13, 1960. The prime minister and head of government was Chang Myon. 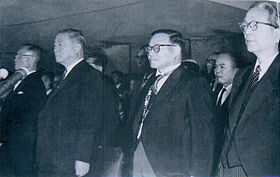 The Second Republic saw the proliferation of political activity which had been repressed under the previous Rhee regime of the First Republic. Much of this activity was from leftist and student groups, which had been instrumental in the overthrow of the First Republic. Union membership and activity grew rapidly during the later months of 1960.[2] Around 2,000 demonstrations were held during the eight months of the Second Republic.[3]

Under pressure from the left, the Chang government carried out a series of purges of military and police officials who had been involved in anti-democratic activities or corruption. A Special Law to this effect was passed on October 31, 1960. [4] 40,000 people were placed under investigation; of these, more than 2,200 government officials and 4,000 police officers were purged. [5] In addition, the government considered reducing the size of the army by 100,000, although this plan was shelved.[6]

In economic terms as well, the government was faced with mounting instability. The government formulated a five-year economic plan, although it was unable to act on it prior to being overthrown.[7] The Second Republic saw the won lose half of its value against the dollar between fall 1960 and spring 1961.[8] Unemployment and wholesale prices also rose during this period.