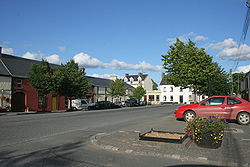 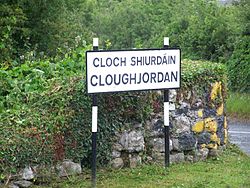 One of three signs around the village showing its name.

/klɒkˈdʒɔrdən/ klok-jor-dən, Irish: Cloch Shiurdáin, meaning "Siurdáin's stone"), is a town in North Tipperary in Ireland. It is in the barony of Ormond Lower, and it is also a parish in the Roman Catholic Diocese of Killaloe.[2]

The town is situated in the north-western part of North Tipperary close to the Offaly border. It is almost equidistant from Nenagh, Roscrea and Birr and is close to Ireland's largest river, the Shannon, and Lough Derg.

Poet and patriot Thomas McDonagh, a native of Cloughjordan, described it as a place “in calm of middle country”.

The alternate spelling is recognised.

Developed at the intersection of travel routes between Nenagh, Birr and Moneygall, the village of Cloughjordan began as an inhabited settlement during the Norman lordship of Ireland of the 13th and 14th centuries when the De Marisco family were allotted land in Ormond under the overlordship of the Butlers by King Henry II. One unit of the De Mariscos (Morris or Morrissey in modern terms) moved into this area, took over the territory and built a stone castle and manor house guarded by a moat surrounding the dwelling.

There is a story which relates that the first De Marisco, who resided here, was a Norman knight who had travelled to the Holy Land to take part in a Crusade against the Saracen invaders. He is said to have brought back a stone from the River Jordan which he built in over the doorway of this castle and it was from that stone that the village got its name – the Stone of Jordan – Clogh Shiúrdáin – Cloughjordan.

Cloughjordan was further developed in the late 17th century by Cromwellian grantees when Colonel John Harrison, an officer in Cromwell's army, was granted an estate of 1,484 acres (6.01 km2) of land around Cloughjordan in payment for his military services. Harrison built a house, now known as Cloughjordan House, at the site of the original Norman Castle of De Marisco and incorporated the old castle into the new building, in which one wall of the castle, about seven and a half feet thick, is still in existence to this day.

Cloughjordan was then remodelled in the late 18th century to include a square in front of the Church of Ireland on the east-west main street.

In 1909 Cloughjordan was one of the first villages in Ireland, after Carlow and Birr, to provide its own rural electrification scheme. The ESB took over the supplying of electricity to the town in 1948.

Cloughjordan railway station opened on 5 October 1863.[3] It is connected to the Irish railway network on a branch from Limerick to Ballybrophy (where it joins the main Cork–Dublin line) and has a twice-daily service in each direction.