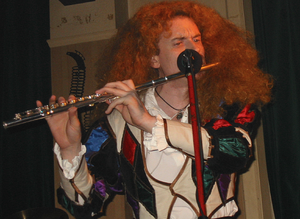 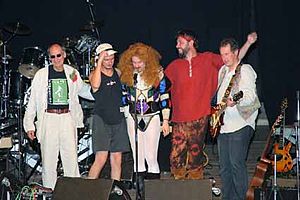 At the end of the Italian Tull Convention, September 2003

The Dayglo Pirates are a UK-based Jethro Tull tribute band. Formed in 1996, they have played to fans' conventions in Italy, Spain and Germany, as well as numerous gigs in the UK. Recently, their vocalist and flautist Paul Forrest appeared on stage with the real Jethro Tull, at the Pavilion Theatre Bournemouth on April 16, 2008.

The name of the band, The Dayglo Pirates, is taken from the lyrics to the song "Up To Me" on the album, Aqualung:

"The rainy season comes to pass,
The day-glo pirate sinks at last.
And if I laughed a bit too fast,
Well it was up to me".

The Dayglo Pirates were featured in issue no. 102 (January 2007) of Classic Rock magazine.

The members of the Dayglo Pirates are:

They have had just one change in personnel, the original keyboard player Dave Bott leaving for personal reasons in 2005. Their regular sound engineer is Tony Shettle.

The band sent Ian Anderson of Jethro Tull a video of the Dayglo Pirates in action in November 1998. Ian replied encouragingly, congratulating them on doing "a fine job", and provided this quote:

"If the guys can get the haircuts a bit more up-to-date and work on the between songs patter, you might even fool me on a good night. Come to think of it, what are you doing Mondays, Wednesdays, and Fridays? I could use some time off so perhaps we can come to some arrangement if you promise to never tell a soul ..."

The Dayglo Pirates have been joined on stage by former members of Jethro Tull on several occasions: 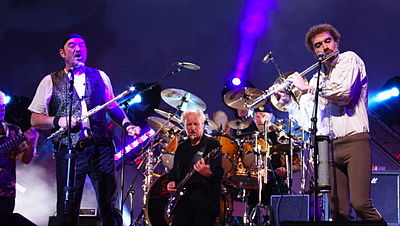 On 16 October 2003, Paul Forrest and Tom Andrews of the Dayglo Pirates, and Ian Anderson of Jethro Tull, were interviewed by Neil Pringle of BBC Southern Counties Radio.[1]

On April 16, 2008, Paul Forrest of the Dayglo Pirates appeared as a special guest of Jethro Tull at a concert at Bournemouth Pavilion. Paul played flute and sang on a medley of We Used To Know and With You There To Help Me, and again on Locomotive Breath during the encore.

The Dayglo Pirates have played at the following European events:

The following are some of the venues that The Dayglo Pirates have appeared at in the UK: