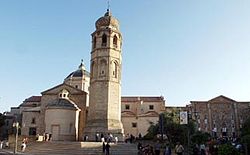 The Cathedral of Oristano. 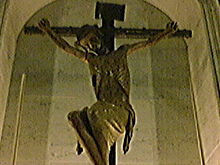 The Christ in the Church of St. Francis

listen (help·info) (Sardinian: Aristanis) is a town and comune, capital of the Province of Oristano, on the island of Sardinia, Italy. It has approximately 32,500 inhabitants.

Its economy is mainly based on fishing, agriculture and, to a certain extent, tourism. 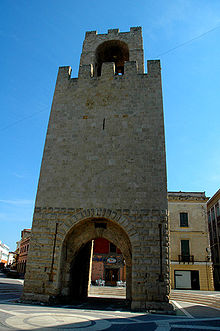 The Tower of St. Christophoros in Oristano.

Oristano was previously known by the Byzantines as Aristanis, and founded close to the Phoenician settlement of Othoca (now Santa Giusta). It acquired importance in 1070, when, reputedly as a result of the frequent Saracen attacks, archbishop Torcotorio made it the seat of the bishopric, which was previously in the nearby coastal town of Tharros. It also became capital of the giudicato ("judiciary", equivalent to a Duchy or Kingdom) of Arborea. Consequently, fortifications were designed, but the building thereof went on until judge Mariano II rose to power.

In medieval times Oristano vied for power over the whole island of Sardinia, and therefore waged wars against the other Sardinian kingdoms. which culminated in the attempt to conquer the whole island during the reign (1347–75) of Mariano IV and that of his daughter Eleanor (1375–1404). The giudicato of Arborea held out to be the last Sardinian kingdom to be conquered by the Catalan troops of the Kingdom of Aragon, in 1478 after the battle of Macomer. Thereafter, Oristano's history was that of the island of Sardinia, characterized by the Aragonese-Spanish (until 1708) and Piedmontese (from 1720) dominations, and then the unification of Italy. 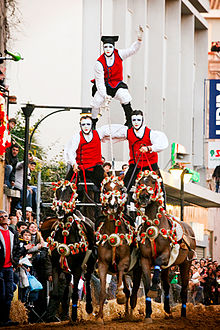 Sa Sartiglia, otherwise known at its inception as Sartilla, is an equestrian tournament held in Oristano for the past 500 years on Carnival Sunday and Mardi Gras. The tournament on Sunday is organized by the Corporation (Gremio) of farmers, whereas that on Mardi Gras by the Gremio of carpenters. It has, arguably, an ancient Castillan origin. Researchers M. Falchi and M. Zucca found a manuscript dating the first tournament to 1543, whereas Pau, a late local historian, believed it originated in Oristano before the Spaniards set foot on the island. In fact, in a letter written to an English friar in the 14th century, St. Catherine of Siena stated that the Judge of Arborea could provide two galleys and one thousand horsemen to fight in a crusade for ten years. While being far from conclusive evidence that the tournament had already been, or was about to be held, this letter is certainly a testament to the importance of horse-breeding in Oristano and its surrounding countryside at the time. 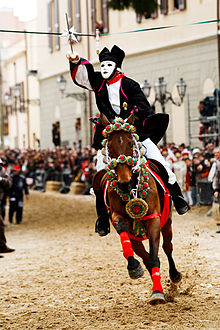 The name "Sartiglia" comes from Sortija which, in turn, evolved from the Latin word Sorticola, the diminutive form of Sors which does not only mean fate and fortune, but also "ring".

The ring is a tin star provided with a hole at its centre, hanging from a ribbon strung above horseman's height across the street near the Cathedral, at which masked horsemen aim with their swords on steeds galloping at breath-taking speed, after being announced by trumpets and drums and having gathered pace down a route, covered with sand, snaking across the town centre. The number of stars caught on each day is a sign of the wealth that the harvest and carpentry work will bring to the corporations.

At the end of Sa Sartiglia, elsewhere within the old walls, another sand covered route will be trodden by horses ridden by those same masked horsemen and women showing their stunning prowess, while engaging in all sorts of acrobatics on two and three galloping steeds at a time. This is called La Pariglia, and ends at sunset.

The leader of both trials is called Su Componidori, meaning "the one who marshals". He is chosen by the members of the Corporations, who do not disclose his name until Candlemas, when Su Majorale announces it directly to the appointee and a careful selection of the horses as well as adequate practice can start. He is neither a man, nor a woman but androgynous, much akin to the land and, at the end of the tournament, blesses by-standers and the town with the "little doll of May" (Sa Pippia 'e maiu), a bunch of flowers swaddled in a ribbon, believed to pre-date the tournament itself, followed by the other horsemen at a canter first, and then alone, riding with his back on his galloping steed's, face up gazing at the Heavens.

Oristano can be reached by train from Sardinia's ports of Olbia and Porto Torres, and the island's main cities Cagliari and Sassari. From Oristano all villages of the province can be reached by buses departing the bus station close to centrally-located Piazza Mannu. Moreover, a private concern provides a twice-daily bus service to and from Cagliari airport. The journey takes approximately 2 hours.

Oristano is twinned with: