Military attachés and observers in the Russo-Japanese War

Military attachés and observers in the Russo-Japanese War

Military attachés and observers in the Russo-Japanese War were historians creating first-hand accounts of what was arguably the world's first modern war.[1] They helped to create primary-source records of this war between Imperial Russian forces and Imperial Japan forces, which has been characterized by some as a rehearsal for the First World War.[2]

The multi-national military attachés and observers who took part in the Russo-Japanese War were expressly engaged in collecting data and analyzing the interplay between tactics, strategy, and technical advances in weapons and machines of modern warfare. For example, reports evaluating the stationary battle at Port Arthur and the maneuver battle at Mukden demonstrate the lethality of modern warfare and foreshadow the combined effects of hand grenades, mortars, machine guns, and field artillery in World War I.[2]

Military and civilian observers from every major power closely followed the course of the war. Most were able to report on events from a perspective somewhat like what is now termed "embedded" positions within the land and naval forces of both Russia and Japan. These military attachés, naval attachés and other observers prepared voluminous first-hand accounts of the war and analytical papers. In-depth observer narratives of the war and more narrowly-focused professional journal articles were written soon after the war; and these post-war reports conclusively illustrated the battlefield destructiveness of this conflict. This was the first time the tactics of entrenched positions for infantry defended with machine guns and artillery became vitally important, and both were factors which came to dominate in World War I.[2] 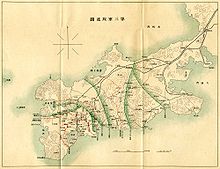 From a 21st century perspective, it is now apparent that tactical lessons which were available to the observer nations were disregarded or not used in the preparations for war in Europe and during the course of World War I.[2]

In 1904-1905, Ian Standish Monteith Hamilton was the military attaché of the Indian Army serving with the Japanese army in Manchuria. Amongst the several military attachés from Western countries, he was the first to arrive in Japan after the start of the war.[3] As the earliest, he would be recognized as the dean of multi-national attachés and observers in this conflict. From this select group of military men would rise such well-known figures as British Field Marshal William Gustavus Nicholson, 1st Baron Nicholson, Chief of the Imperial General Staff; U.S. General of the Armies John J. Pershing, head of the American Expeditionary Force in WWI; U.S.General of the Army Douglas MacArthur; and Marshal of Italy Enrico Caviglia.

The Russian war artist Vasili Vereshchagin was invited by Admiral Stepan Makarov to observe the war aboard Makarov's flagship Petropavlovsk. On April 13, 1904, the war ship hit mines near Port Arthur; and nearly all aboard were killed. Vereshchagin's last work was recovered. The salvaged canvas depicted a council of war presided over by Admiral Makarov.[6]

Japanese General Kuroki Tamemoto and his staff were photographed with Western military attachés and war correspondent observers after the Battle of Shaho (1904). The most senior of the military attachdés, Gen. Sir Ian Hamilton, center, stands with left hand in a coat pocket and a stick tucked under his right arm. 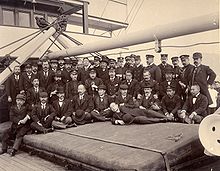