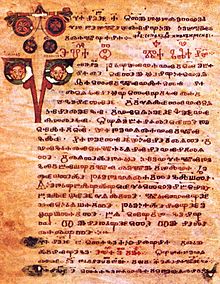 A folio of Codex Assemanius from the Vatican Library

Codex is named after its discoverer, Italian Jesuit scholar and Vatican librarian of Syrian origin Joseph Assemani, who discovered it and bought it in Jerusalem in 1736. His nephew donated it to the Vatican Library, where the codex is still kept today.

By content its an Aprakos (weekly, service) Gospel. It contains only pericopes, i.e. parts read in the church. At the end of the manuscript there is a Menologium which mentions st. Demetrius, Theodosius, Clement and other Macedonian saints. The codex is held by many to be the most beautiful Old Church Slavonic book.

Manuscript abounds with ligatures. Linguistic analysis has showed that the manuscript is characterized by frequent vocalizations of yers (ъ > o, ь > e), occasional loss of epenthesis, and ь is frequently replaced with hard ъ, esp. after r. These are the traits pointing to the Macedonian area, and are shared with Codex Marianus. Yers are also frequently omitted word-finally, and occasionally non-etymologically mixed (ь being written after k and g).