For other uses, see Climbing (disambiguation) 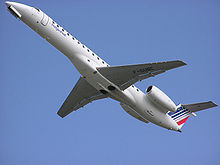 In aviation, the term climb refers both to the actual operation of increasing the altitude of an aircraft and to the logical phase of a typical flight (often called the climb phase or climbout) following take-off and preceding the cruise, during which an increase in altitude to a predetermined level is effected.[1]

Because lift diminishes with decreasing air density, a climb, once initiated, will end by itself when the diminishing lift with increasing altitude drops to a point that equals the weight of the aircraft. At that point, the aircraft will return to level flight at a constant altitude.

However, during a constant rate climb at a reasonably steady angle the lift force is generally less than the weight with the engine operating. This is due to the upward fraction of the thrust vector. This in turn causes the load factor to be slightly less than 1. It is only during the radial (constant increase in pitch) or vertical acceleration that the lift vector is larger than the weight vector.

The climb phase, also known as climb out, of a typical flight of an aircraft is the period during which the aircraft climbs to a predetermined cruising altitude after take-off. Depending on the aircraft, the altitudes involved, and other factors, this phase may last from a minute or two to half an hour or more. The climb phase immediately follows take-off and precedes the cruise phase of the flight. Although a single climb phase is typical, multiple climb phases may alternate with cruise phases, particularly for very long flights in which altitude is increased as the weight of fuel aboard decreases (see step climb).

If a climb beyond the abilities of the aircraft is attempted, increasing angle of attack in the wings may produce a stall.

Aircraft also climb by entering a zone of rising air, but since such zones are unpredictable and inconveniently located, and since most are poorly adapted to passive climbs of this type, only gliders attempt such climbs on a regular basis. A passive climb combined with an active climb can produce a higher climb rate than either method alone.

The opposite of a climb is a descent.

In some jurisdictions and under some conditions, “normal” climbs are defined by regulations or procedures, and are used to develop airway systems, airspaces, and instrument procedures. Normal climbs are simply standardized climb rates achievable by most aircraft under most conditions that are used as conservative guidelines when developing procedures or structures that are partially a function of such rates. For example, a normal climb of 120 feet per nautical mile might be assumed during the development of a navigational procedure or while defining airspace limits in airport terminal areas.