Zzzap (rendered ZZZap!) was a British children's television comedy programme. The concept of the show was a giant comic that has been brought to life. The show ran from 8 January 1993 until 21 September 2001[1], and was produced by The Media Merchants and Meridian Broadcasting. A spin-off titled 'Cuthbert's Diary' was also produced.

The programme follows the same format throughout its run. A Title Intro is shown consisting of a couple of short clips for Each character from the season. It is then followed by a series of short two or three minute long segments, followed by the credits. Each segment is introduced by the camera zooming in on a corresponding panel on a giant comic, shot in reverse (e.g: The Camera starting at the Panel, and pulling back) and then played in reverse. This giant comic has a set of nine frames on it, some of which contain a character representing their segments. 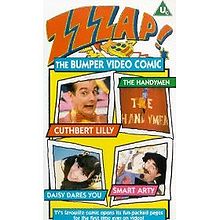 The first VHS release of Zzzap.