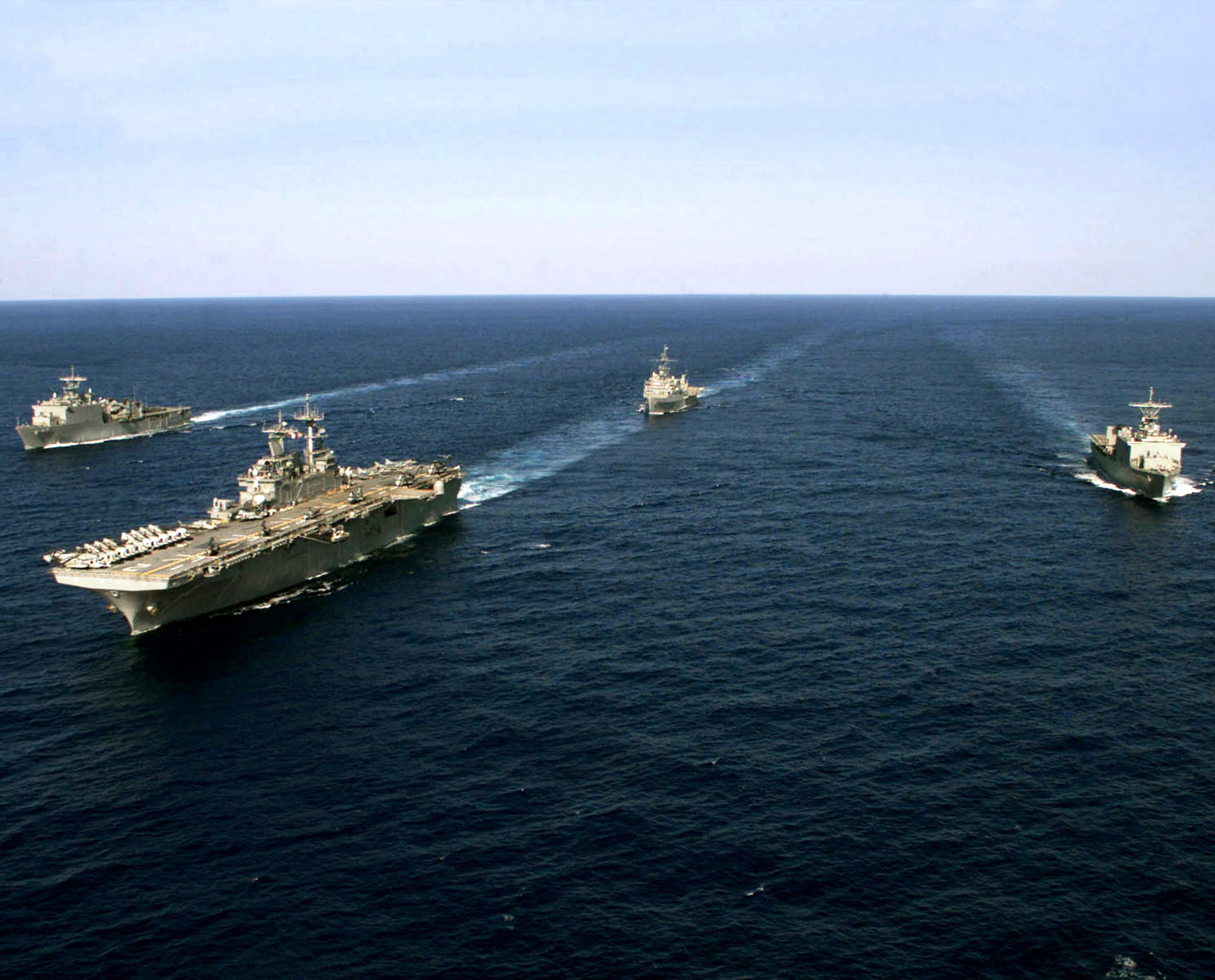 Amphibious warfare ship, often shortened to amphibs, phibs, or popularly known as gator freighters, denotes a range of classes of employed to land and support ground forces on enemy territory by an amphibious assault. The largest fleet of these types is operated by the , including the "Tarawa" class s dating back to the 1970s and the newer and larger "Wasp" class ships that debuted in 1989.

Amphibious assaults need such fine control and such a large degree of coordination that it is only the top tier powers that have the ability to even attempt them seriously, let alone pull them off. The two nations that have made by far the most amphibious assaults during the past century are the United States and the United Kingdom. From the great assaults of to the recent attack on the in , both countries have been at the forefront of developing amphibious assault doctrine and shipping.Fact|date=February 2007

World War I and interwar period

The history of the specialist amphibious assault vessel really begins during . Prior to , amphibious assaults had taken place using conventional boats. The disastrous Gallipoli landings of 1915 (see ) showed that this type of operation was impossible in the face of modern weapons, especially the machine gun. The 1920s and 1930s did not see much progress in most of the world, the exception being the U.S. Marine Corps. The small Corps operations of the period in Central and South America led to the development of amphibious assault doctrine much in advance of the rest of the world. By the late 1930s, concrete plans were beginning to form to build the first true specialised amphibious assault ships.

Many of the early types of shipping were converted cargo vessels. However, the (LST) stands out. As the name suggests it is a specialised type for getting tanks or other large vehicles ashore. Unlike the other larger shipping, LSTs could beach and discharge directly onto shore. Beyond the ships carrying the troops, other vessels were needed. It was quickly appreciated that amphibious assaults were such complicated operations that a specialised flagship was needed, with facilities that a normal naval vessel simply could not provide. It was also realised that s, s and s could not necessarily provide all the (including ) that an assault would need. Therefore specialised shipping was developed that incorporated various direct and indirect fire weapons. These included guns and rockets which could be mounted on landing craft and landing ships. As part of the final barrage before an assault, the landing area would be plastered by these types.

Despite all the progress that was seen during World War II, there were still fundamental limitations in the types of coastline that were suitable for assault. Beaches had to be relatively free of obstacles, and have the right tidal conditions and the correct slope. However, the development of the fundamentally changed the equation.

The first use of helicopters in an amphibious assault came during the Anglo-French- invasion of in 1956 (the ). Two British light fleet carriers were pressed into service to carry helicopters, and a -sized airborne assault was made. One of these HMS|Bulwark|R08|2 was commissioned in the late 50s as a dedicated "commando carrier". The techniques were developed further by American forces in the and refined during training exercises. The modern amphibious assault can take place at virtually any point of the coast, making defending against them extremely difficult.

Earlier ships which played a similar role to the current vessels as the heart of an amphibious assault included five "Iwo Jima" class vessels, built in the 1950s and 1960s and various converted fleet and escort carriers. The first of the type envisaged was the USS "Block Island" (CVE-106/LPH-1), which never actually saw service as an amphibious assault ship. Delays in the construction of the "Iwo Jima" class saw other conversions made as a stopgap measure; three "Essex"-class aircraft carriers (USS "Boxer" (CV-21/LPH-4), USS "Princeton" (CV-37/LPH-5), and USS "Valley Forge" (CV-45/LPH-8)) and one "Casablanca"-class escort carrier (USS "Thetis Bay" (CVE-90/CVHA-1/LPH-6)) were converted into amphibs, the "Boxer" and "Thetis Bay" classes.

The "Tarawa" and "Wasp" types and their "Iwo Jima" class forebears resemble s. However, the role of an amphibious assault ship is fundamentally different from that of an aircraft carrier. Its aviation facilities are not to support strike or air defence aircraft, but for hosting helicopters to support forces ashore.

One of the most recent innovations is the (Landing Craft Air Cushioned). These large further expand the range of conditions under which an amphibious assault can take place and increase the speed of transfer of assets from ship to shore. Ground effect planes such as the , straddling the line between aircraft and ship, have also been proposed for the role in the past.

s, while proposed during the 1950s, and almost brought to actual construction by the in the 1960s, are currently not being designed. However, if the predictions of military experts such as or others [ [http://www.combatreform2.com/submarineaircraftcarriers.htm Submarine aircraft carriers] (uneven-quality private website, but has third-party citations in support)] hold true, and surface shipping becomes extremely dangerous during future wars of evenly matched powers (due to satellite recon and anti-ship missiles), then transport- and amphibious assault submarines might deserve another look.

Beyond the largest vessels in the fleet, a variety of other specialised types support amphibious assaults. These include the landing platform dock (LPD), landing ship dock (LSD) and command ships (LCC and AGF). Navies other than the USN operate still further types including landing ship tank (LST), landing ship logistics (LSL) and landing ship medium (LSM).