The Heliconius butterflies from the tropics of the Western Hemisphere are classic Müllerian mimics.[1]

Müllerian mimicry is a natural phenomenon when two or more harmful species, that may or may not be closely related and share one or more common predators, have come to mimic each other's warning signals. It is named after the German naturalist Fritz Müller, who first proposed the concept in 1878.[2][3]

It can be contrasted with Batesian mimicry, where a harmless organism imitating the protected species is referred to as the mimic and the dangerous one being imitated the model. Müllerian mimicry differs because both parties are harmful; each mimics the other species, while serving as a model at the same time. If one species is encountered far less than the other, the more common species could be treated as the model and the other the mimic.[4] However, if they are encountered in similar numbers they would best be termed comimics or mimic-models. The predator mediating indirect convergence between these two parties is known as the signal receiver or dupe, though the latter term is less relevant here, as they are not actually deceived about the harmful qualities of their prey; both prey provide an honest warning signal. For this reason, Georges Pasteur has asserted that it is not a form of mimicry at all, as no deception is involved.[5] Unlike other mimicry systems, the signal receiver is better off for mistaking one harmful species for another, as it avoids the potential harm involved.

However, because comimics may have differing degrees of protection, the distinction between Müllerian and Batesian mimicry is not absolute, and there can be said to be a spectrum between the two forms.[6] Additionally, a species may be a Batesian mimic to one predator and a Müllerian mimic to another. While Batesian and Müllerian mimicry are commonly given examples of mimicry, there is often little or no mention of other forms.[7] There are many other types of mimicry however, some very similar in principle, others far separated. For example in aggressive mimicry a predator might mimic the food of its prey, luring them towards it and improving its foraging success.

Müllerian mimicry need not involve visual mimicry; it may employ any of the senses. For example, many snakes share the same auditory warning signals, forming an auditory Müllerian mimicry ring. More than one common signal may show convergences by the parties. While model and mimic are often closely related species, Müllerian mimicry between very distantly related taxa also occurs. 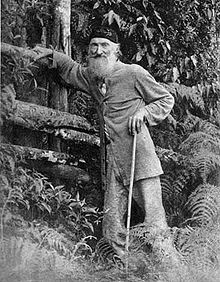 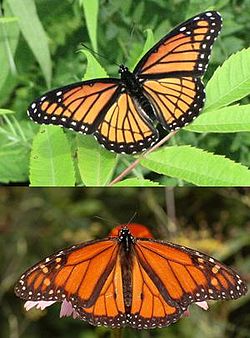 Perhaps one of the most well-known examples of mimicry, the viceroy butterfly (top) appears very similar to the noxious-tasting monarch butterfly (bottom). Although it was for a long time purported to be an example of Batesian mimicry, the viceroy has recently been discovered to be actually just as unpalatable as the monarch, making this a case of Müllerian mimicry.[8]

Müllerian mimicry was proposed by the German zoologist and naturalist Johann Friedrich Theodor Müller (1821–1897), always known as Fritz. An early proponent of evolution, Müller offered the first explanation for resemblance between certain butterflies that had puzzled the English naturalist Henry Walter Bates, who, like Müller, spent a significant part of his life in Brazil. Müller had also seen these butterflies first hand, and collected specimens like Bates.

Understanding Müllerian mimicry is impossible without first understanding aposematism, or warning signals. Dangerous organisms with these aposematic signals are avoided by predators, who quickly learn after a bad experience not to pursue the same prey again. Learning is not actually necessary for animals which instinctively avoid certain prey;[9] however, learning from experience is much more common.[10] The underlying concept with predators that learn is that the warning signal makes the harmful organism easier to remember than if it remained as cryptic as possible (e.g. being still and silent, providing no scent, and blending in with the background). Aposematism and crypsis are in this way opposing concepts, but this does not mean they are mutually exclusive. Many animals remain inconspicuous until threatened, then suddenly employ warning signals, such as bright colors on their undersides or loud vocalizations. In this way, they enjoy the best of both strategies.

Many different prey of the same predator may employ separate warning colors, but this makes no sense for any party. Surely if they could all get together and agree on a common warning signal, the predator would have fewer detrimental experiences, and the prey would lose fewer individuals educating it. But no such conference needs to take place, as a prey species that just so happens to look a little like a harmful species will be safer than its conspecifics, leading to a tendency toward a single warning language. This can lead to the evolution of both Batesian and Müllerian mimicry, depending on whether the prey is harmful, as well, or just a freerider. Multiple species can join this protective cooperative, expanding the mimicry ring.

Müller thus provided an explanation for 'Bates' paradox'; the mimicry was not a case of exploitation by one species, but rather a mutualistic arrangement.