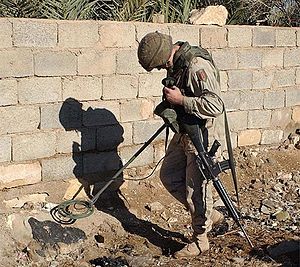 A U.S. Army soldier uses a metal detector to search for weapons and ammunition in Iraq

A metal detector is a device which responds to metal that may not be readily apparent.

The first industrial metal detectors were developed in the 1960s and were used extensively for mining and other industrial applications. Uses include de-mining (the detection of land mines), the detection of weapons such as knives and guns, especially in airport security, geophysical prospecting, archaeology and treasure hunting. Metal detectors are also used to detect foreign bodies in food, and in the construction industry to detect steel reinforcing bars in concrete and pipes and wires buried in walls and floors.

Toward the end of the 19th century, many scientists and engineers used their growing knowledge of electrical theory in an attempt to devise a machine which would pinpoint metal. The use of such a device to find ore-bearing rocks would give a huge advantage to any miner who employed it. The German physicist Heinrich Wilhelm Dove invented the induction balance system, which was incorporated into metal detectors a hundred years later. Early machines were crude, used a lot of battery power, and worked only to a very limited degree. Alexander Graham Bell used such a device to attempt to locate a bullet lodged in the chest of American President James Garfield in 1881; the attempt was unsuccessful because the metal coil spring bed Garfield was lying on confused the detector.[1]

The modern development of the metal detector began in the 1920s. Gerhard Fisher had developed a system of radio direction-finding, which was to be used for accurate navigation. The system worked extremely well, but Fisher noticed that there were anomalies in areas where the terrain contained ore-bearing rocks. He reasoned that if a radio beam could be distorted by metal, then it should be possible to design a machine which would detect metal using a search coil resonating at a radio frequency. In 1925 he applied for, and was granted, the first patent for a metal detector. However, it was one Lieutenant Jozef Stanislaw Kosacki, a Polish officer attached to a unit stationed in St Andrews, Fife, Scotland, during the early years of World War II, who refined the design into a practical Polish mine detector.[2] They were heavy, ran on vacuum tubes, and needed separate battery packs.

The design invented by Kosacki was used extensively during the clearance of the German mine fields during the Second Battle of El Alamein when 500 units were shipped to Field Marshal Montgomery to clear the minefields of the retreating Germans, and later used during the Allied invasion of Sicily, the Allied invasion of Italy and the Invasion of Normandy.[3] As it was a wartime research operation to create and refine the design of the detector, the knowledge that Kosacki created the first practical metal detector was kept secret for over 50 years.

Many manufacturers of these new devices brought their own ideas to the market. White's Electronics of Oregon began in the 1950s by building a machine called the Oremaster Geiger Counter. Another leader in detector technology was Charles Garrett, who pioneered the BFO (Beat Frequency Oscillator) machine. With the invention and development of the transistor in the 1950s and 1960s, metal detector manufacturers and designers made smaller lighter machines with improved circuitry, running on small battery packs. Companies sprang up all over the USA and Britain to supply the growing demand.

The biggest technical change in detectors was the development of the induction-balance system. This system involved two coils that were electrically balanced. When metal was introduced to their vicinity, they would become unbalanced. What allowed detectors to discriminate between metals was the fact that every metal has a different phase response when exposed to alternating current. Scientists had long known of this fact by the time detectors were developed that could selectively detect desirable metals, while ignoring undesirable ones.

Even with discriminators, it was still a challenge to avoid undesirable metals, because some of them have similar phase responses e.g. tinfoil and gold, particularly in alloy form. Thus, improperly tuning out certain metals increased the risk of passing over a valuable find. Another disadvantage of discriminators was that they reduced the sensitivity of the machines.

Coil designers also tried out innovative designs. The original induction balance coil system consisted of two identical coils placed on top of one another. Compass Electronics produced a new design: two coils in a D shape, mounted back-to-back to form a circle. This system was widely used in the 1970s, and both concentric and D type (or widescan as they became known) had their fans. Another development was the invention of detectors which could cancel out the effect of mineralization in the ground. This gave greater depth, but was a non-discriminate mode. It worked best at lower frequencies than those used before, and frequencies of 3 to 20 kHz were found to produce the best results. Many detectors in the 1970s had a switch which enabled the user to switch between the discriminate mode and the non-discriminate mode. Later developments switched electronically between both modes. The development of the induction balance detector would ultimately result in the motion detector, which constantly checked and balanced the background mineralization. 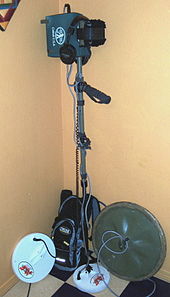 A pulse induction metal detector with an array of coils

At the same time, developers were looking at using a different technique in metal detection called Pulse Induction. Unlike the Beat Frequency Oscillator or the Induction Balance machines which both used a uniform alternating current at a low frequency, the pulse induction machine simply fired a high-voltage pulse of signal into the ground. In the absence of metal, the 'spike' decayed at a uniform rate, and the time it took to fall to zero volts could be accurately measured. However, if metal was present when the machine fired, a small current would flow in the metal, and the time for the voltage to drop to zero would be increased. These time differences were minute, but the improvement in electronics made it possible to measure them accurately and identify the presence of metal at a reasonable distance. These new machines had one major advantage: they were completely impervious to the effects of mineralization, and rings and other jewelry could now be located even under highly-mineralized black sand.

In England and Wales metal detecting is legal provided that permission is granted by the landowner, and that the area is not a Scheduled Ancient Monument, a site of special scientific interest (SSSI), or covered by elements of the Countryside Stewardship Scheme.

Items discovered which fall within the definition of treasure[4] must be reported to the coroner or a place designated by the coroner for treasure. The voluntary reporting of finds which do not qualify as treasure to the Portable Antiquities Scheme or the UK Detector Finds Database is encouraged.

The situation in Scotland is very different. Under the Scots law principle of bona vacantia, the Crown has claim over any object of any material value where the original owner cannot be traced.[5] There is also no 300 year limit to Scottish finds. Any artifact found, whether by metal detector survey or from an archaeological excavation, must be reported to the Crown through the Treasure Trove Advisory Panel at the National Museums of Scotland. The panel then determines what will happen to the artifacts. Reporting is not voluntary, and failure to report the discovery of historic artifacts is a criminal offence in Scotland. 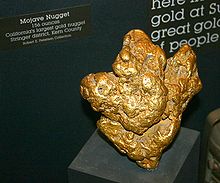 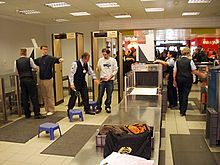 Metal detectors at an airport

A series of aircraft hijackings led the United States in 1972 to adopt metal detector technology to screen airline passengers, initially using magnetometers that were originally designed for logging operations to detect spikes in trees[6]. The Finnish company Outokumpu adapted mining metal detectors[when?], still housed in a large cylindrical pipe, to make a commercial walk-through security detector. The development of these systems continued in a spin off company and systems branded as Metor Metal Detectors evolved in the form of the rectangular gantry now standard in airports. In common with the developments in other uses of metal detectors both alternating current and pulse systems are used, and the design of the coils and the electronics has moved forward to improve the discrimination of these systems. In 1995 systems such as the Metor 200 appeared with the ability to indicate the approximate height of the metal object above the ground, enabling security personnel to more rapidly locate the source of the signal. Smaller hand held metal detectors are also used to locate a metal object on a person more precisely.

Contamination of food by metal shards from broken processing machinery during the manufacturing process is a major safety issue in the food industry. Metal detectors for this purpose are widely used and integrated into the production line.

Current practice at garment or apparel industry plants is to apply metal detecting after the garments are completely sewn and before garments are packed to check whether there is any metal contamination (needle, broken needle, etc.) in the garments. This needs to be done for safety reasons.

The basic principle of operation for the common industrial metal detector is based on a 3 coil design. This design utilizes an AM (amplitude modulated) transmitting coil and two receiving coils one on either side of the transmitter. The design and physical configuration of the receiving coils are instrumental in the ability to detect very small metal contaminates of 1mm or smaller. Today modern metal detectors continue to utilize this configuration for the detection of tramp metal.

The coil configuration is such that it creates an opening where by the product (food, plastics, pharmaceuticals, etc.) passes through the coils. This opening or aperture allows the product to enter and exit through the three coil system producing an equal but mirrored signal on the two receiving coils. The resulting signals are summed together effectively nullifying each other.

When a metal contaminant is introduced into the product an unequal disturbance is created. This then creates a very small electronic signal that is amplified through special electronics. The amplification produced then signals a mechanical device mounted to the conveyor system to remove the contaminated product from the production line. This process is completely automated and allows manufacturing to operate uninterrupted.

In civil engineering, special metal detectors (cover meters) are used to locate rebar. Rebar detectors are less sophisticated, and can only locate metallic objects below the surface.