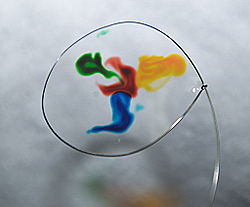 Food coloring spreading on a thin water film in the International Space Station.

Food coloring is a substance, liquid or powder, that is added to food and/or drink to change its color. Food coloring is used both in commercial food production and in domestic cooking. Due to its safety and general availability, food coloring is also used in a variety of non-food applications, for example in home craft projects and in education.

People associate certain colors with certain flavors, and the color of food can influence the perceived flavor in anything from candy to wine.[1] For this reason, food manufacturers add these dyes to their products. Sometimes the aim is to simulate a color that is perceived by the consumer as natural, such as adding red coloring to glacé cherries (which would otherwise be beige), but sometimes it is for effect, like the green ketchup that Heinz launched in 1999.

While most consumers are aware that food with bright or unnatural colors (such as the green ketchup mentioned above, or children's cereals such as Froot Loops) likely contain food coloring, far fewer people know that seemingly "natural" foods such as oranges and salmon are sometimes also dyed to mask natural variations in color.[2] Color variation in foods throughout the seasons and the effects of processing and storage often make color addition commercially advantageous to maintain the color expected or preferred by the consumer. Some of the primary reasons include:

Food colorings are tested for safety by various bodies around the world and sometimes different bodies have different views on food color safety. In the United States, FD&C numbers (which generally indicates that the FDA has approved the colorant for use in foods, drugs and cosmetics) are given to approved synthetic food dyes that do not exist in nature, while in the European Union, E numbers are used for all additives, both synthetic and natural, that are approved in food applications. The food colours are known by E numbers that begin with a 1, such as E100 (turmeric) or E161b (lutein).

Most other countries have their own regulations and list of food colors which can be used in various applications, including maximum daily intake limits.

Natural colors are not required to be tested by a number of regulatory bodies throughout the world, including the United States FDA. The FDA lists "color additives exempt from certification" for food in subpart A of the Code of Federal Regulations - Title 21 Part 73. However, this list contains substances which may have synthetic origins.

A growing number of natural food dyes are being commercially produced, partly due to consumer concerns surrounding synthetic dyes. Some examples include:

To ensure reproducibility, the colored components of these substances are often provided in highly purified form, and for increased stability and convenience, they can be formulated in suitable carrier materials (solid and liquids). Hexane, acetone and other solvents break down cell walls in the fruit and vegetables and allow for maximum extraction of the coloring. Residues of these often remain in the finished product, but they do not need to be declared on the product; this is because they are part of a group of substances known as carry-over ingredients.

Natural food colors, due to their organic nature, can sometimes cause allergic reactions and anaphylactic shock in sensitive individuals. Coloring agents known to be potential hazards include annatto, cochineal and carmine.[citation needed]

Seven dyes were initially approved under the Pure Food and Drug Act of 1906, but several have been delisted and replacements have been found.[3] Some of the food colorings have the abbreviation "FCF" in their names. This stands for "For Coloring Food" (US)[4] or "For Colouring of Food" (UK).[5][6]

In the USA, the following seven artificial colorings are permitted in food (the most common in bold) as of 2007[update]:

The above are known as "primary colors"; when they are mixed to produce other colors, those colors are then known as "secondary colors".

The following dyes are only allowed by the FDA for specific limited applications:

Color additives are available for use in food as either "dyes" or lake pigments (commonly known as "lakes").

Dyes dissolve in water, but are not soluble in oil. Dyes are manufactured as powders, granules, liquids or other special purpose forms. They can be used in beverages, dry mixes, baked goods, confections, dairy products, pet foods, and a variety of other products. Dyes also have side effects which lakes do not, including the fact that large amounts of dyes ingested can color stools.

Lakes are made by combining dyes with salts to make insoluble compounds. Lakes tint by dispersion. Lakes are not oil soluble, but are oil dispersible. Lakes are more stable than dyes and are ideal for coloring products containing fats and oils or items lacking sufficient moisture to dissolve dyes. Typical uses include coated tablets, cake and doughnut mixes, hard candies and chewing gums, lipsticks, soaps, shampoos, talc, etc.

Because food dyes are generally safer to use than normal artists' dyes and pigments, some artists have used food coloring as a means of making pictures, especially in forms such as body-painting.

Food colorings can be used to dye fabric, but are usually not wash-fast when used on cotton, hemp and other plant fibers. Some food dyes can be fixed on Nylon and animal fibers. Red food dye is often used as theatrical blood.

Though past research showed no correlation between attention-deficit hyperactivity disorder (ADHD) and food dyes,[10][11] new studies now point to synthetic preservatives and artificial coloring agents as aggravating ADD and ADHD symptoms, both in those affected by these disorders and in the general population.[12][13] Older studies were inconclusive, quite possibly due to inadequate clinical methods of measuring offending behavior. Parental reports were more accurate indicators of the presence of additives than clinical tests.[14] Several major studies show academic performance increased and disciplinary problems decreased in large non-ADD student populations when artificial ingredients, including artificial colors, were eliminated from school food programs.[15][16]

This criticism originated during the 1950s. In effect, many foods that used dye (such as red velvet cake) became less popular.[citation needed]

Brilliant Blue (BBG) food coloring was cited in a recent study in which rats that had suffered a spinal injury were given an injection of the dye immediately after the injury, and were able to regain or retain motor control. BBG helps protect spine from ATP (adenosine triphosphate), which the body sends to the area after a spinal injury, which further damages the spine by killing motor neurons at the site of the injury.[19]