Norovirus (formerly Norwalk agent) is an RNA virus (taxonomic family Caliciviridae) that causes approximately 90% of epidemic non-bacterial outbreaks of gastroenteritis around the world,[1] and may be responsible for 50% of all foodborne outbreaks of gastroenteritis in the US.[2][3] Norovirus affects people of all ages. The viruses are transmitted by faecally contaminated food or water, by person-to-person contact,[4] and via aerosolization of the virus and subsequent contamination of surfaces.[5]

After infection, immunity to norovirus is usually incomplete and temporary.[6] There is an inherited predisposition to infection, and individuals with blood type O are more often infected,[1][7] while blood types B and AB can confer partial protection against symptomatic infection.[8][9]

Outbreaks of norovirus infection often occur in closed or semi-closed communities, such as long-term care facilities, overnight camps, hospitals, prisons, dormitories, and cruise ships where the infection spreads very rapidly either by person-to-person transmission or through contaminated food.[10] Many norovirus outbreaks have been traced to food that was handled by one infected person.[11]

Norovirus is rapidly inactivated by either sufficient heating or by chlorine-based disinfectants, but the virus is less susceptible to alcohols and detergents as it does not have a lipid envelope.[12]

Specific diagnosis of norovirus is routinely made by polymerase chain reaction (PCR) assays or real-time PCR assays, which give results within a few hours. These assays are very sensitive and can detect concentrations as low as 10 virus particles.[13]

Tests such as ELISA that use antibodies against a mixture of norovirus strains are available commercially but lack specificity and sensitivity.[14]

Noroviruses are transmitted directly from person to person and indirectly via contaminated water and food. They are highly contagious, with as few as one to ten virus particles being able to cause infection. Transmission occurs through ingesting contaminated food and water and by person-to-person spread. Transmission through fecal-oral can be aerosolized when those stricken with the illness vomit and can be aerosolized by a toilet flush when vomit or diarrhea is present; infection can follow eating food or breathing air near an episode of vomiting, even if cleaned up.[15] The viruses continue to be shed after symptoms have subsided and shedding can still be detected many weeks after infection.[16]

As said previously Norovirus is extremely infectious. In one outbreak at an international scout jamboree in the Netherlands, each person with gastroenteritis infected an average of 14 people before increased hygiene measures were put in place. Even after these new measures were enacted an average ill person still infected 2.1 other people.[17] A CDC study of eleven outbreaks in New York State lists the suspected mode of transmission as person-to-person in seven outbreaks, foodborne in two, waterborne in one, and one unknown. The source of waterborne outbreaks may include water from municipal supplies, wells, recreational lakes, swimming pools and ice machines.[18]

Shellfish and salad ingredients are the foods most often implicated in norovirus outbreaks. Ingestion of shellfish that have not been sufficiently heated poses a high risk for norovirus infection. Foods other than shellfish may be contaminated by infected food handlers.[19] 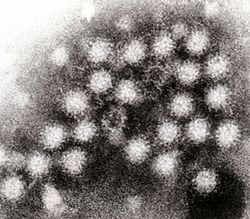 Noroviruses (NoV) are a genetically diverse group of single stranded RNA, nonenveloped viruses belonging to the Caliciviridae family.[20] According to the International Committee on Taxonomy of Virus, the genus Norovirus has one species, which is called "Norwalk virus" and assigned the abbreviation "NV". Serotypes, strains and isolates include:[21]

Noroviruses can genetically be classified into 5 different genogroups (GI, GII, GIII, GIV, and GV), which can be further divided into different genetic clusters or genotypes. For example genogroup II, the most prevalent human genogroup, presently contains 19 genotypes. Genogroups I, II and IV infect humans, whereas genogroup III infects bovine species and genogroup V has recently been isolated in mice.[22]

Most noroviruses that infect humans belong to genogroup GI and GII.[23] Noroviruses from Genogroup II, genotype 4 (abbreviated as GII.4) account for the majority of adult outbreaks of gastroenteritis and often sweep across the globe.[24] Recent examples include US95/96-US strain, associated with global outbreaks in the mid- to late-90s, Farmington Hills virus associated with outbreaks in Europe and the United States in 2002 and in 2004 Hunter virus was associated with outbreaks in Europe, Japan and Australasia. In 2006 there was another large increase in NoV infection around the globe.[25] Two new GII.4 variants caused around 80% of those Norovirus associated outbreaks and they have been termed 2006a and 2006b.[citation needed] Recent reports have shown a link between the expression of human histo-blood group antigens (HBGAs) and the susceptibility to norovirus infection.[26][27][28] Studies have suggested that the viral capsid of noroviruses may have evolved from selective pressure of human HBGAs.[29][30]

A 2008 study suggests that the protein MDA-5 may be the primary immune sensor that detects the presence of noroviruses in the body.[31] Interestingly, some people have common variations of the MDA-5 gene that could make them more susceptible to norovirus infection.[32]

A 2010 study suggested that a specific genetic version of Norovirus (which would not be distinguishable from other types of the virus using standard viral antibody tests) interacts with a specific mutation in the ATG16L1 gene to help trigger symptomatic Crohn's Disease in mice that have been subjected to a chemical that causes intestinal injury similar to the process in humans (there are other similar ways for such diseases to happen like this, and this study in itself does not prove that Norovirus causes Crohn's in humans).

Noroviruses contain a positive-sense RNA genome of approximately 7.5 kbp, encoding a major structural protein (VP1) of about 58~60 kDa and a minor capsid protein (VP2).[33] The virus particles demonstrate an amorphous surface structure when visualized using electron microscopy and are between 27-38 nm in size.[34] The most variable region of the viral capsid is the P2 domain,which contains antigen-presenting sites and carbohydrate-receptor binding regions.[35][36][37]

When a person becomes infected with norovirus, the virus begins to multiply within the small intestine. After approximately 1 to 2 days, norovirus symptoms can appear. The principal symptom is acute gastroenteritis that develops between 24 and 48 hours after exposure, and lasts for 24–60 hours.[3] The disease is usually self-limiting, and characterized by nausea, forceful vomiting, watery diarrhea, and abdominal pain; and in some cases, loss of taste. General lethargy, weakness, muscle aches, headache, coughs, and low-grade fever may occur.

Severe illness is rare: although people are frequently treated at the emergency ward, they are rarely admitted to the hospital. The number of deaths from norovirus in the US is estimated to be around 300 each year, with most of these occurring in the very young, elderly, and persons with weakened immune systems. Symptoms may become life-threatening in these groups if dehydration is ignored or not treated.[4]

Hand washing is an effective method to reduce the spread of norovirus pathogens. Sanitizing of surfaces where the norovirus may be present is recommended. Alcohol rubs are not very effective at dealing with Norovirus as it does not have a lipid viral envelope.

In health-care environments, the prevention of nosocomial infections involves routine and terminal cleaning. Nonflammable alcohol vapor in CO2 systems are used in health care environments where medical electronics would be adversely affected by aerosolized chlorine or other caustic compounds.[38]

Ligocyte announced in 2007 that it was working on a vaccine and had started phase 1 trials.[39] As of 2011, a monovalent nasal vaccine has completed phase I/II trials, while bivalent intramuscular and nasal vaccines are at earlier stages of development.[40]

Routine protocols to detect norovirus (norovirus RNA) in clams and oysters by RT-PCR (reverse transcription polymerase chain reaction) are being employed by governmental laboratories such as the FDA in the USA. However, routine methods to detect the virus on other food items are not readily available because of the variable nature of different food items affecting concentration and extraction of the virus and presence of factors that make PCR (polymerase chain reaction) analysis techniques ineffective.[41]

Epidemiological data from developing countries about the importance of norovirus in pediatric diarrhea is limited. Recently, in Nicaragua, it has been observed that norovirus is responsible for 11% of the diarrhea cases occurring in children <5 years of age at community level and 15% of the moderate to severe cases requiring intravenous re-hydration.[42]

In Guangdong province of China, The Provincial Health Department said, on December 17, 2010, it has confirmed 429 cases of norovirus infection in the November outbreak in Conghua of Guangzhou, but no one died from it.[43]

The norovirus was originally named the Norwalk agent after Norwalk, Ohio, USA, where an outbreak of acute gastroenteritis occurred among children at Bronson Elementary School in November 1968. The name was shortened to norovirus after being identified in a number of outbreaks on cruise ships and receiving attention throughout the USA. In 1972, electron microscopy on stored human stool samples identified a virus, which was given the name Norwalk virus. Numerous outbreaks with similar symptoms have been reported since. The cloning and sequencing of the Norwalk virus genome showed that these viruses have a genomic organization consistent with viruses belonging to the family Caliciviridae.[44] The name norovirus (Norovirus for the genus) was approved by the International Committee on Taxonomy of Viruses in 2002.[45]

Common names of the illness caused by noroviruses are winter vomiting disease, viral gastroenteritis, and acute non-bacterial gastroenteritis,[4] also colloquially known as "stomach flu"—a broad name that refers to gastric inflammation caused by a range of viruses and bacteria.