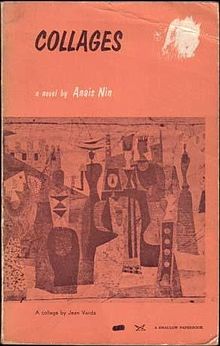 Collages, published in 1964, was Anaïs Nin's last published novel (excluding her erotica). It is very different from the previous novels of the Cities of the Interior series, because it contains none of the familiar characters in those novels. It is also different in that it takes place on two continents, has about two dozen important characters, and for the first time in Anaïs Nin's work the female lead is not seeking psychological wholeness. Most of Anaïs Nin's other novels only have a few main characters, there is rarely much geographical movement in the other novels, and usually the lead character is a woman seeking psychological wholeness.