The African Grey Parrot (Psittacus erithacus), also known as the Grey Parrot, is a medium-sized parrot found in the primary and secondary rainforest of West and Central Africa. Experts regard it as one of the most intelligent birds. They feed primarily on palm nuts, seeds, fruits, leafy matter, but have been observed eating snails. Their overall gentle nature and their inclination and ability to mimic speech have made them popular pets. This has led many to be captured from the wild and sold into the pet trade. The African Grey Parrot is listed on CITES appendix II, which restricts trade of wild caught species, because wild populations can not sustain trapping for the pet trade. As a pet, they must be kept entertained and busy with a person or toy or they may become stressed and begin self-destructive behavior. 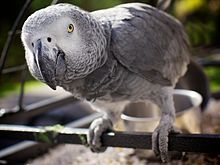 There are two subspecies universally accepted:[1]

Some aviculturalists recognize a third and even a fourth subspecies, but these are not distinguishable in scientific studies.[2]

Like many large parrots, the African Grey is a long-lived bird. The Animal Ageing and Longevity Database states the maximum reliably recorded longevity for the species as being that of a bird still alive in captivity at the age of 49.7 years. Also acknowledged are claims of captive African Grey Parrots reaching the ages of 73 and 93,[3] whereas the World Parrot Trust lists a longevity of 50-60 years for an African Grey in captivity.[4] 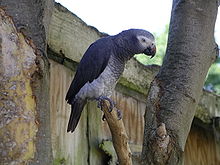 Rarer than previously believed, it is uplisted from a species of Least Concern to Near Threatened in the 2007 IUCN Red List.[5] A recent analysis suggests that up to 21% of the global population may be taken from the wild annually,[5] primarily for the pet trade.

The species is endemic to primary and secondary rainforest of West and Central Africa.[6] Grey parrots depend on large old trees for the natural hollows they use for nesting. Studies in Guinea and Guinea-Bissau have found that the preferred species of nesting trees are also preferred timber species.[7] There is a positive relationship between the status of the species and the status of primary forest:[8] where the forests are declining, so too are populations of Grey parrots.[7] 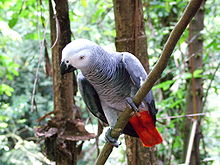 The African Grey Parrot is listed on Appendix II of the Convention on International Trade in Endangered Species of Wild Fauna and Flora (CITES). This requires both that exports be accompanied by a permit issued by a national authority and that a finding has been made that the export is non-detrimental to the species in the wild. With exports totaling more than 350,000 specimens from 1994–2003,[9] the grey parrot is one of the most heavily-traded CITES-listed bird species. In response to continuing population declines, exceeded quotas and unsustainable and illegal trade, including among range states, CITES included the grey parrot in Phase VI of the CITES Review of Significant Trade in 2004. This review has resulted in recommended zero export quotas for several range states and a CITES Decision to develop regional management plans for the species.

In the United States, importation of wild-caught Grey parrots is prohibited under the U.S. Wild Bird Conservation Act of 1992. In the European Union, an EU Directive of 2007 prevents importation of this and any other "wild-caught" bird for the pet trade.

Unlike other parrots, wild African Greys have been documented imitating the calls of several other species.

Dr. Irene Pepperberg's research with captive African greys, most notably with a bird named Alex, has scientifically demonstrated that they possess the ability to associate simple human words with meanings, and to intelligently apply the abstract concepts of shape, colour, number, zero-sense, etc. According to Pepperberg and other ornithologists[who?], they perform many cognitive tasks at the level of dolphins, chimpanzees, and even a human toddler [10]

Many pet Congo African Greys learn to speak slowly until their second or third year.[citation needed] Timnehs are generally observed to start speaking earlier.[citation needed] Both subspecies seem to have same ability and tendency to produce human speech, but vocal ability and proclivity may range widely among individual birds.

One notable African Grey is N'kisi, who in 2004 already was said to have a vocabulary of over 950 words and was noted for creative use of language,[11] as had been Alex. For example, when Jane Goodall visited N'kisi in his New York home, he greeted her with "Got a chimp?" as he'd seen pictures of her with chimpanzees in Africa.[12]

A study led by Dr. Dalila Bovet of Paris West University Nanterre La Défense, published in 2011 demonstrated that African Grey Parrots were able to coordinate and collaborate with each other to an extent, to solve problems set by scientists, for example two birds pulling strings at the same time in order to obtain food - or one bird standing on a perch in order to release a food-laden tray, whilst the other then pulled the tray out from the test apparatus (both would then feed). The birds in question were observed waiting for their partners to perform the necessary actions so that their behaviour could be synchronized. It was also noted that the parrots appeared to express individual preferences as to which of the other test birds they chose to work with.[13]

Wild African Grey Parrots frequently whistle, shriek, squeak, click, etc. The African Grey owner should expect to hear regular renditions of the microwave, telephone, alarm clocks, dripping water, wild birds, video games, and any other electronic sound that is often heard by the parrot, thus, they have also been noted for profanity even after changing owners. African birds also have the capability of mimicking and distinguishing between different voices presented to the bird. 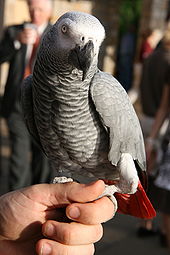 Their sociability and intelligence can make African Grey Parrots excellent pets with a strongly devoted following among parrot owners. These same qualities mean that African Greys require special commitment by their owners including frequent one-on-one interaction and supervised time out of their cage. They also require large cages, a varied diet that includes fresh foods, and plenty of safe and destructible toys. When not provided with these things African Greys quickly develop unpleasant behaviors and can eventually develop health problems that are difficult to remedy (such as feather-plucking). Even the healthiest, happiest pet African Grey will generate a fair amount of mess and noise. Like most parrots, they are non-domesticated, and even a well-socialized, hand-raised and aviary bred bird is only one or two generations from a wild predecessor. Despite this, there is a long recorded history of African Greys kept by the ancient Greeks, wealthy Roman families, King Henry VIII, Portuguese sailors, and others. 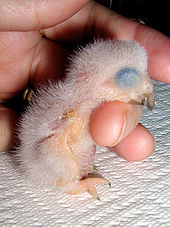 African Grey Parrot red-factor mutations, including the all-red individual discussed in this section.