MAXjet Airways was an American, transatlantic, all-business class airline that operated between 2003 and 2007. Its headquarters were located on the grounds of Washington-Dulles International Airport, and in the Dulles area of Loudoun County, Virginia, United States.[2]

From the beginning, MAXjet Airways was compromised by a significant lack of economies of scale, having only a maximum of 5 aircraft at the height of its operations, although this is similar to other competing airlines in this class (EOS, SilverJet [4] etc.). It offered passengers airport lounge access (flagship lounge at Stansted; shared, non-proprietary at JFK and LAX; not available in Las Vegas), premium complimentary meals and beverages and on-demand in-flight entertainment. MAXjet's corporate slogan changed from "It's just good business" to "Affordable Business Class." sometime in mid-2006, and then to "It's Business Class. Only Smarter", in November, 2007.[citation needed]

On 24 December 2007, the airline filed for Chapter 11 Bankruptcy and ceased operations. The airline confirmed that Eos Airlines was to accommodate passengers on their Stansted to JFK services.[5]

On 25 April 2005, the airline officially changed its name from SkyLink Airways to MAXjet Airways following a formal objection to the original name from SkyLink Aviation in Canada. On 23 August 2005 it was granted final approval to launch services by the United States Department of Transportation. The airline was publicly traded on the London Stock Exchange Alternative Investment Market as "MAXJ".[3] It operated its first service from New York to London on 1 November 2005. Founded in 2003, the airline was conceived as a transatlantic low-cost carrier that would code share with domestic low-cost carriers at Baltimore-Washington International Thurgood Marshall Airport. During its start-up phase, management expressed concern over the economics of applying the low cost carrier model to transatlantic routes and instead repositioned the airline as a premium all-business-class service. MAXjet's target market was premium economy and "savvy" business class passengers.

The success of MAXjet’s all-business-class service continued to grow as the company claimed load factors of 83.1% (June 2007) on its network from London Stansted.[6]

As well as the scheduled routes, MAXjet’s luxury charter operations continued to grow with the acquisition of more aircraft. Some aircraft were planned to focus on the growing charter business as well as being used as support on the New York, Los Angeles and Las Vegas scheduled routes. The airline’s luxury charter business, which experienced significant growth, transported groups to various destinations throughout Europe, the Caribbean and the USA. Charters included Stockholm to Las Vegas, and England to Washington D.C. and Los Angeles including a charter for the 2006 U.S Ryder Cup team. The company had a strong customer base that included corporations, government entities and professional sports teams.[7]

While the company's "MAXflier" frequent flier program had been advertised for more than six months on the MAXjet website as being available to customers, it was not actually yet up and running as of October 2007. When questioned regarding this issue, the company's customer service representatives responded that the program would be introduced soon, but were unable to provide an estimate as to exactly when the program would come online.

Suspension of MAXjet shares and filing for bankruptcy

On 7 December 2007, MAXjet suspended trading of its shares on AIM, pending clarification of their financial position.[8]

An article in the Financial Times on 23 December 2007 reported that the company was in "last-ditch talks" to arrange a financial rescue package.[9] However, the following morning the company announced on its website that it had filed for Chapter 11 bankruptcy. Passengers who had yet to travel were advised to seek a refund from the point of purchase. The company announced it had already begun to make alternative travel or accommodation arrangements for those left stranded.

On 24 December 2007, MAXjet announced that they permanently suspended all flight operations citing rising fuel costs, increased crew salaries, and other unforeseen costs. The airline purchased tickets to accommodate passengers on Eos Airlines, and Continental Airlines and Silverjet both made offers to accommodate stranded MAXjet passengers.[10][11][12]

On March 25, 2008, MAXjet has announced that operations will soon start again. The airline was acquired by NCA Sports Group to restart its operation as a charter service.[13]

The following destinations were operated by MAXjet during its existence.

The MAXjet Airways fleet consisted of the following aircraft as of December 2007[14]: 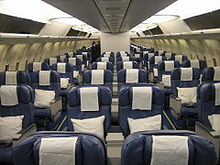 MAXjet aircraft were fitted with traditional leather business-class "deep-recline" cradle-seats with a 60 inch seat pitch (distance between a seat and the same point on the seat in front of it) and a 160-degree recline.

On-demand entertainment, which included 100 hours of movies, television programs and music videos as well as pure music audio content, was available via individual portable media players called "MAXplayers", which were provided on each flight. Although the seats were new, MAXjet aircraft had a relatively old style cabin fit, so the seats were not equipped with conventional built-in entertainment systems or in-flight A/C power ports.