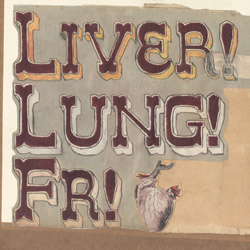 "Liver! Lung! FR!" is an forthcoming live album by Scottish indie rock band , due for release in the US, and in the UK and Europe. The album is a "primarily acoustic" performance of the band's acclaimed second album, "", recorded live at The Captain's Rest in , on . [http://www.pitchforkmedia.com/article/news/145372-frightened-rabbit-to-release-live-album]

The instrumental interludes, "Bright Pink Bookmark" and "Extrasupervery", are not included on the release, as they are unlikely to have been played live.

Guests on the album include James Graham, from , who appears on "Keep Yourself Warm", and Ross Clark who appears on "Old Old Fashioned". [http://fat-cat.co.uk/fatcat/release.php?id=275]