CzechTek was an annual teknival normally held on the weekend at the end of July in the Czech Republic. It attracted thousands of free tekno dancers from several European countries (40,000 people attended in 2003 and 2006). Open invitations were usually made to all soundsystems, performers and all human beings with positive thinking.

The first CzechTek was in 1994 at Hostomice. Every year the festival was held in different locations around the Czech Republic. The festival was not the same as more commercial festivals such as the Love Parade or the Street Parade. It was usually set on ex-military land or in a meadow near a forest. There was little or no organisation, since the idea of free tekno is based on personal freedom and responsibility, although later teknivals required organisation due to large numbers of attendees. The style and image of the people was also different from that of the Love Parade's participants, it was more underground.[clarification needed] The location of the meeting was always revealed one day before the event on Czech rave websites. 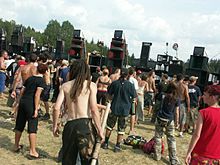 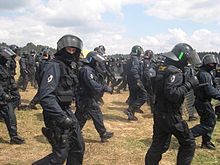 Riot police at CzeckTek in 2005

In 2005 shortly after the start, the CzechTek festival was broken up. The organizers of CzechTek claimed to be permitted to set up the event around Mlynec, in the west of the country close to the German border. However, around 1,000 riot police arrived, using heavy equipment including tear gas, water cannons and the military BVP vehicle stating damage of private property. The standoff between police and public resulted in multiple injured on both sides. A few of the injuries were severe. Protests arose outside the Czech interior ministry. The Czech president criticized the heavy use of police force. The Prime Minister, Jiří Paroubek, defended the action, stating that the techno fans were "not dancing children but dangerous people".

Several months after the clash all charges against police were dropped[clarification needed][citation needed]. In April 2006, there was a march followed by a free party in Strasbourg, France to protest against police repression in general and against the actions of the Czech police in closing CzechTek specifically.

On 14 June 2006 an agreement was signed between the Ministry of Defence and the Association of Czech Sound Systems. The festival was held on land which was part of the Hradiště Military Region. It took place without any repeat of the previous year's violence.

As the co-ordinators stated (on the official site of CzechTek) after the last event (2006), Czechtek has been discontinued.