China Airlines Flight 006 (callsign "Dynasty 006") was a daily non-stop flight departing from Taipei at 16:15 and scheduled to arrive at Los Angeles International Airport at 07:00 local time. On February 19, 1985, it was involved in an aircraft upset accident after the No. 4 engine flamed out. The plane rolled over and plunged 30,000 ft (9,100 m), experiencing high speeds and g-forces (approaching 5g) before the captain was finally able to recover from the rapid dive, and then to divert to San Francisco International Airport.[1]

The accident occurred ten hours into the regular service between Taipei and Los Angeles. The Boeing 747SP-09 was 350 miles (550 km) northwest of San Francisco, cruising at an altitude of 41,000 ft (12,500 m). The flight crew consisted of captain Min-Yuan Ho, first officer Ju Yu Chang, flight engineer Kuo-Win Pei, relief captain Chien-Yuan Liao, and relief flight engineer Shih Lung Suwere.[1] The sequence began when the No. 4 starboard outermost engine stalled at a low thrust setting and flamed out. That engine had failed twice during previous flights (both while cruising at FL 410 & 430, respectively). In each of those cases, the engine was restarted, after descending to a lower altitude. The maintenance response to the logbook entries that noted the problems were: engine inspection; fuel filter drainage and replacement; vane controller inspection and replacement; water drainage from Mach probes; insufficient modules; and other filter replacements. None of those acts fixed the recurrent stalling and flameout problem of the No. 4 engine.[2][3] 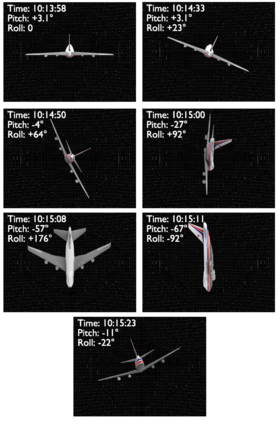 After the flameout, the captain instructed the flight engineer to attempt to restart the engine, while the plane remained at FL 410 (nominally 41,000 feet at a standard altimeter setting which does not reflect actual pressure, and is used by all aircraft above 18,000 feet), with the autopilot still engaged. That was contrary to the flight manual procedure, which required the plane to be below 30,000 feet (9,100 m), before attempting to restart a flamed out engine. The restart attempt failed.

The airspeed continued to decrease, while the autopilot rolled the control wheel to the maximum left limit of 23 degrees. As the speed decreased even further, the plane began to roll to the right, even though the AP was maintaining the maximum left roll limit of 23 degrees. By the time the captain disconnected the autopilot, the plane had rolled over 60 degrees to the right and the nose began to drop. Aileron control was the only means available to the autopilot to keep the wings level as the autopilot does not connect to the rudder during normal cruise flight. To counteract the asymmetrical forces created by the loss of thrust from the No. 4 engine, it was essential for the pilot to manually push on the left rudder. However, the captain failed to use any rudder inputs at all, before or after disconnecting the AP. The resulting uncontrolled flight path is depicted in the diagram to the left.

As the plane descended through clouds, the Captain's attention was drawn to the artificial horizon which displayed excessive bank and pitch. Because such an attitude is highly irregular, the crew incorrectly assumed the indicators to be faulty. Without any visuals references (due to the clouds around the aircraft) and having discarded the information from the ATIs, the crew became spatially disoriented. The plane entered a steep dive at a high bank angle. Altitude decreased 10,000 ft (3,000 m) within only 20 seconds, a vertical descent averaging 340.9 mph. The crew and passengers experienced g-forces reaching as much as 5g. [2]

Only after breaking through the bottom of the clouds at 11,000 feet (3,400 m) could the captain orient himself and bring the plane under control, leveling out at 9,600 feet (2,900 m). They had descended 30,000 ft (9,100 m) in under two and a half minutes. The flight crew were under the impression that all four engines had flamed out, but the National Transportation Safety Board believes only engine No. 4 had failed. After leveling out, it was found that the three remaining engines (1, 2 & 3 as numbered from left to right looking forward from the cockpit) were supplying normal thrust. A restart attempt brought No. 4 back into use. They began climbing and reported to air traffic control "condition normal now" and they were continuing on to Los Angeles. They then noticed that the inboard main landing gear were down[2] and one of the plane's hydraulic systems was empty. Because they didn't have sufficient fuel to reach Los Angeles with the drag added by the landing gear, they diverted to San Francisco. Learning there were injured people on board, an emergency was declared and they flew straight in to the airport and landed without further incident. 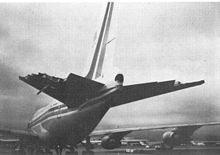 There were two serious injuries on board: a fracture and laceration of a foot; and an acute back strain requiring two days of hospitalization. The aircraft was significantly damaged by the aerodynamic forces. The wings were permanently bent upwards by two inches, the inboard main landing gear lost two actuator doors, and the two inboard main gear struts were left dangling.[2] Most affected was the tail, where large outer parts of both horizontal stabilizers had been ripped off. The entire left outboard elevator had been lost along with its actuator, which had been powered by the hydraulic system that ruptured and drained.

After substantial investigation, this accident brought to international attention the problem of jet lag as a contributing factor to pilot errors. The captain was considered to be highly experienced and had flown six international flights in the previous two weeks. Though he testified that he did not believe he was tired, NTSB investigators suggest that his inability to sleep during his rest period and the fact that the accident took place at 2 am Taipei time contributed to his inability to focus on and process important details about the aircraft's behavior that could have averted the accident.

After repairs were made to correct the significant damage to the plane, it returned to service on April 25, 1985. It continued in service for nearly 12 years until it was leased to China Airlines' sister company, Mandarin Airlines, on January 1, 1997. Later, it was owned and operated by a religious organization known as Gospel to the Unreached Millions or GUM headed by K. A. Paul and christened 'Global Peace One'. On July 17, 2005 the FAA suspended its operating certificate due to insufficient maintenance. It was then due major maintenance work, but was never completed. As of May 20, 2010[update], the aircraft is kept in a large hangar at General Abelardo L. Rodríguez International Airport, in Tijuana, Baja California and it is possible that the aircraft will be scrapped as it is reported to be in very poor condition.[3]. The aircraft can be seen using Google Earth at the coordinates 32°32'38.42"N 116°57'56.10"W.

The flight was documented on the television program Mayday (otherwise known as Air Emergency or Air Crash Investigation).