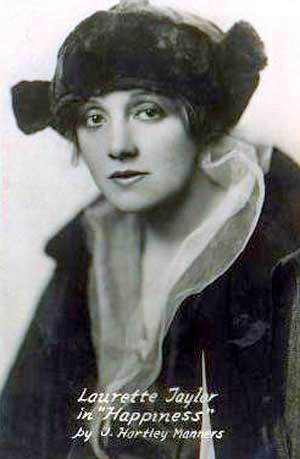 Laurette Taylor (, – , ) was an American actress, primarily on stage, with some forays into silent film. She is considered by many a leading figure of the twentieth century theater. Major roles include the title character in "Peg o' My Heart" and the indomitable but deluded Southern matriarch Amanda Wingfield in the original Broadway production of the play "", a legendary performance that marked one of the most dramatic comebacks in theater history.

Laurette Taylor was most likely born Helen Loretta Cooney (although other possible birth names have been suggested) in of Irish Catholic extraction.

She married her first husband, Charles A. Taylor, around 1900, when she was sixteen, and they had two children, Dwight and Marguerite, but they divorced around 1910. In 1912 she married British-born playwright , who wrote "Peg o' My Heart", a major and enduring personal triumph for Taylor, who toured in it extensively throughout the country. Based upon the popular novel by Mary O'Hara, the play's success inspired a 1922 film version starring Taylor and directed by . A six-reel print of the film survives in the Motion Picture Division of the .

Taylor remained married to Manners until his death in 1928. She never remarried and several authors have stated that she was bisexual, her lovers including legendary stars , , , film director

Taylor began attracting critical acclaim virtually from her first known performance on Broadway in "The Great John Ganton" in 1908 and building her reputation in such stage productions as "The Ringmaster", "", "Seven Sisters", "Lola", and "". "Peg o' My Heart", which ran on Broadway from December 20, 1912 to May 1914 (a total of 603 performances) cemented her fame and reputation with audiences as a skilled actress. She toured the nation with the play, which reopened on Broadway at the Cort Theater on February 14, 1921 and ran for another 692 performances. She achieved great success starring in such other productions as "", "", "" and the special production "". In the latter production, she performed scenes from "", "", and "". Prominent critics of the era outdid each other in praising her prodigious gifts, versatility, and beauty.

However, very little of Taylor's performances is preserved on film. In 1924, Taylor starred in the film version of another theatrical success by her husband Manners. "Happiness", directed by , told of the adventures of a young shopgirl named "Jenny Wray," who learns that riches do not necessarily lead to happiness. The cast included and . The same year, Taylor starred in another screen version of Manners' dramatic play "One Night In Rome", in which she played the dual roles of Duchess Mareno/Madame Enigme. Taylor seems to have enjoyed making "One Night in Rome" as she kept a personal print of the movie to always show guests at her home, re-running it over and over again.

Taylor's outsized personality, mercurial moods, and eccentricities became legendary. Her friend spent a weekend at the home of Taylor and, inspired by that remarkable visit wrote, in just three days, his devastating, witty comedy of manners "" (1925). The play, a widely-praised comedic dissection of a family whose theatrical excesses drive to distraction their unsuspecting visitors, was a major hit from the moment of its August 6, 1925 debut. It also caused a serious and permanent rift in the friendship of Taylor and Coward.

Laurette Taylor suffered from severe for many years, a condition which sharply limited her appearances from the late 1920s throughout her career. In 1938, she headed the cast in a revival of "" and did not appear again until her reemergence in "Menagerie" in 1945, a performance that received rapturous acclaim. Alcoholism almost certainly contributed to her death from a at the age of 62.

Writing after Taylor's death, paid tribute to "the great warmth of her heart," saying, "There was a radiance about her art which I can compare only to the greatest lines of poetry, and which gave me the same shock of revelation as if the air about us had been momentarily broken through by light from some clear space beyond us. [ [http://www.nytimes.com/books/00/12/31/specials/williams-taylor.htm| Creator of 'The Glass Menagerie' Pays Tribute to Laurette Taylor] ] "

In 1960, the play "Laurette", starring and directed by Jose Quintero, closed out of town in due to Holliday's illness. Produced by , the play had a supporting cast that included , , and . For years, film director tried unsuccessfully to launch a film version of Taylor's life. Among the actresses who declined the role were Holliday and .

In 1963, a musical adaptation of "Laurette" opened on Broadway. The musical was called "Jennie" and starred in the title role. 's book is credited as having been suggested by Marguerite Courtney's "Laurette", with a score by and . It only ran for 82 performances, receiving mediocre reviews. [ [http://www.ibdb.com/production.asp?ID=3033] "Jennie" on Broadway] ]

A one-act play, "Opening Night", appeared briefly off Broadway in October of 1963. Peggy Woodportrayed Fanny Ellis, a once famous star who is preparing for a performance in her dressingroom. Many thought Fanny was actually Taylor. Wood appeared with her co-star, RuthGates. The play lasted 47 performances.

In the 2004 documentary "", several Broadway veterans such as , , , , , , , , , , , and nearly unanimously rank Taylor's stage performances as the most memorable of their entire lives. A rare film clip of Taylor in a made for the studio is included in the documentary. The test, for a role in a film directed by , reportedly did not meet the approval of studio executives. Among the greatest admirers of her talents was , who corresponded with her and emulated her style.

The actor , of Odd Couple fame, was a great admirer of Taylor and named one of his daughters after her.

Her great granddaughter [imdb name|0852119|Chloe Taylor] is currently an actress in .

Taylor planned to make her film debut in "Peg o' My Heart," but the film version of the hit play was coveted by nearly every screen actress, including Mary Pickford, who made an offer considerably in excess of the highest amount ever paid for the picture rights to a play or a story. The rights to the film were coveted because of the production's established popularity. Almost any actress in the famous role would be assured of a resounding success, however Taylor doggedly clung to the movie rights for her own use, should she ever commit to appearing in a film.

The heads of more than one prominent company were particularly desirous of securing Taylor’s services and the commercial potential her following would bring with an appearance in movie theaters in "Peg O’ My Heart." Rather than become just another movie actress, however, Laurette steadfastly declared that she would stay out of the films forever. Her idea was to make one picture and one only -- "Peg O’ My Heart".

It took years for the play to be produced and released. King Vidor remembered in his autobiography, "A Tree Is A Tree," “I soon landed a job at the old Metro studio on Romaine Street – the assignment: to direct Laurette Taylor in "Peg O’ My Heart". Although I had never seen Miss Taylor, her name carried with it a certain magic to my young ears.”

The play was considerably expanded for the film version, and the final production was an immediate success with audiences. Taylor went on to make another adaptation of one of her stage successes, "Happiness," and then a third and final film for Metro, "One Night in Rome."

She never appeared in another film, although David O' Selznick did invite her to film a sound test for a role in his 1938 film "," which Taylor did, but she chose not to accept the part (Minnie Dupree was cast. The sound film test exists and has been shown on TV from time to time).