The Magic Roundabout, (released in France as Pollux, le manège enchanté and in North America as Doogal), is a 2005 British computer-animated film based on the television series of the same name. The film was produced by Action Synthese and released by Pathé on February 11, 2005 in the United Kingdom and France, and The Weinstein Company on February 24, 2006 in North America. The plot concerns a dog named Dougal (Doogal in North America) who has to save his best friend, Florence, as well as the whole world, from being frozen by an evil spring named ZeeBad. The film was received positively in the United Kingdom, but the American edit was largely panned in the United States.

The film begins with a shaggy, candy-loving dog named Dougal trying to get sweets from a candy cart. He goes so far as to place a tack in the road to pop its tire, thinking to be rewarded for watching the cart. After convincing the driver to leave, Dougal is trying to decide which candy he will request when he accidentally starts the cart up again and causes it to collide with the titular magic roundabout at the center of the village. A blue jack-in-the-box-like creature emerges from the top and flies away, snatching a decorative Foot Guard figurine from the roundabout before leaving. The roundabout freezes over, trapping repairman Mr. Rusty, Dougal's young owner Florence, and two other children named Basil and Coral within an icy cell.

The villagers are horrified by this development, therefore call upon the resident wizard, Zebedee, also a jack-in-the-box-like creature, for help. He explains that the roundabout acted as a mystical prison for the evil ice wizard Zeebad. With it broken Zeebad is free to work his magic on the world again (it is implied he started the first ice age). The only way to return Zeebad to his prison is to place three magic diamonds in the roundabout, or watch the world slowly freeze over again. Zebedee sends Dougal, Brian the cynical snail, Ermintrude the opera-singing cow, Dylan the hippie rabbit, and the magic Train to accomplish this mission. Zeebad animates the Foot Guard figurine, Sergeant Sam, and enlists him to find the enchanted diamonds first, for with them Zeebad can freeze the sun itself. Meanwhile, Zebedee's fellowship makes camp in the icy mountains near Zeebad's old lair. Dougal wanders off during the night and is captured by Zeebad. Ermintrude breaks him out of his prison; after a short chase, Zebedee shows up to battle his evil counterpart. Zeebad gains the upper hand and overpowers Zebedee, freezing him and collapsing the cliff on which he stands.

Mourning their dispatcher as dead, Dougal and his friends embark to recover the diamonds. This task takes them to a lava-bordered volcano, an ancient temple filled with booby-traps and evil skeleton guards (at which point Dylan reveals an exceptional knowledge of several types of martial arts), and a final showdown with Zeebad, where it is revealed that Sergeant Sam had contained the third diamond in his chest. Zeebad obtains all three diamonds during the course of the film, and attempts to freeze the Sun. Ermintrude, Brian, Dylan, and finally Dougal intervene to stop him; when they have done so, Zeebad is imprisoned in the carousel again and Zebedee is restored to his friends. The ice surrounding the carousel melts, freeing the people trapped therein; of them, Florence is comatose and must be revived by a desperate Dougal. A moose, whose color had been changed from brown to blue by Zeebad in the earlier scenes of the film, is restored to his true color by Zebedee. Dougal, who vowed to give up sugar when it seemed all was lost, forgets his former pledge completely, but now realizes the true value of his friends and the good qualities of selflessness, courage, and humility. 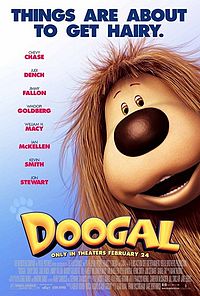 Promotional poster for the North American release of the film

The Magic Roundabout was the first computer-animated film to be made in the United Kingdom and it gained generally favourable reviews from critics in Britain, for retaining its charm from the original television series and its superb animation.[citation needed] While some critics questioned the update for today's children and its subtle drug references[citation needed], the reviews were mostly positive. The public also supported the film, and while some were disappointed on the nostalgia factor, their praise earned this film a total gross of £5.8 million at the box office.

In 2006, the film was released in the US as "Doogal". In the North American version of the film, where audiences are unfamiliar with the series, the majority of original British voices have been replaced by celebrities more familiar to the American public, such as Jon Stewart and Chevy Chase. Only two original voices remained - those of Kylie Minogue and Ian McKellen. The US version also featured narration by Judi Dench and a new storyline made to accommodate multiple pop culture references (mostly references to Lord of the Rings) and flatulence jokes (neither of which were present in the original release). This version received negative reviews. Rotten Tomatoes ranked the film 83rd in the 100 worst reviewed films of the 2000s, with a rating of 6%,[1] and an F rating from Entertainment Weekly magazine.[citation needed] It was also a commercial failure, only earning a total of $7.2 million in the United States, which is considered exceptionally low by CGI animated film standards (the average domestic gross for a computer animated film is $134,571,721[citation needed]), thus making Doogal the lowest grossing CGI feature in history. After being advertised for a short time, its distribution ceased, but is widely carried in United States retail outlets such as Safeway as a children's DVD in retail stores and rental shops. The original French/British version of the film is available in the US under the title Sprung! The Magic Roundabout and occasionally airs on American TV networks.