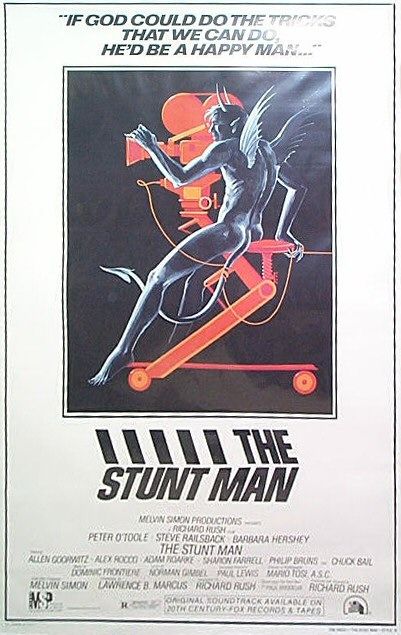 "The Stunt Man" is a critically acclaimed American directed by Richard Rush, starring , and . The movie was adapted by and Rush from the novel by . It tells the story of a young who hides as a on the set of an whose charismatic director will do seemingly anything for the sake of his art.

It was nominated for three : Best Actor in a Leading Role (Peter O'Toole), Best Director (Richard Rush), and Best Writing, Screenplay Based on Material from Another Medium. However, due to its limited release, it never earned much attention from American audiences at large Fact|date=February 2007. As O'Toole remarked in a DVD audio commentary, "The film wasn't released, it escaped." [cite web |url=http://www.bbc.co.uk/films/2003/02/24/the_stunt_man_2003_dvd_review.shtml |title=The Stunt Man DVD (1980) |author=Almar Haflidason |publisher=bbc.co.uk |accessdate=2007-10-28]

Cameron (Steve Railsback) is a young veteran running from the police. He stumbles onto the set of a movie and accidentally causes the death of one of the film's stunt men. The eccentric and autocratic director, Eli Cross (Peter O'Toole), agrees to hide Cameron from the police if he will take the dead man's place. Cameron soon begins to suspect that Cross is putting him in excessive danger. The boundaries between reality and fiction become increasingly blurred as Cross exercises godlike control over the production.

Production of the film took place in 1978.

Of "The Stunt Man", wrote "there was a great deal in it that I admired... [but] there were times when I felt cheated."

The film plays with the audience's perceptions by constantly switching between events occurring in the "real world" and those happening in Cross's movie, usually with no clear transition. Thus it is often cited as a key example of and .

Peter O'Toole mentions in his DVD commentary that he based his character on , who had directed him in "Lawrence of Arabia".

"The Stunt Man" was released on DVD on , in two versions by . The first version is a standard release featuring two deleted scenes and a commentary by director Richard Rush and stars Peter O'Toole, Steve Railsback, Barbara Hershey, Alex Rocco, Sharon Farrell and Chuck Bail. The second version is a limited edition (100,000 copies) containing everything from the standard release as well as including the 2001 documentary "".