Aerospace Engineering deals with the design, construction, and application of the science behind the forces and physical properties of aircraft, rockets, flying craft, and spacecraft. The field also covers their aerodynamic characteristics and behaviors, airfoil, control surfaces, lift, drag, and other properties. Aerospace engineering is not to be confused with the various other fields of engineering that go into designing these complex craft. For example, the design of aircraft avionics, while certainly part of the system as a whole, would rather be considered electrical engineering, or perhaps computer engineering. The landing gear system on an aircraft may fall into the field of mechanical engineering, and so forth. It is typically a large combination of many disciplines that makes up aeronautical engineering.

While aeronautical engineering was the original term, the broader "aerospace" has superseded it in usage, as flight technology advanced to include craft operating in outer space.[2] Aerospace engineering, particularly the astronautics branch, is referred to colloquially as "rocket science".

Flight vehicles undergo severe conditions such as extreme changes in atmospheric pressure and temperature, with structural loads applied upon vehicle components. Consequently, they are usually the products of various technological and engineering disciplines including aerodynamics, propulsion, avionics, materials science, structural analysis and manufacturing. These technologies are collectively known as aerospace engineering. Because of the complexity of the field, aerospace engineering is conducted by a team of engineers, each specializing in their own branches of science.[3]

The development and manufacturing of a modern flight vehicle is an extremely complex process and demands careful balance and compromise between abilities, design, available technology and costs. Aerospace engineers design, test, and supervise the manufacture of aircraft, spacecraft, and missiles. Aerospace engineers develop new technologies for use in aviation, defense systems, and space.

The origin of aerospace engineering can be traced back to the aviation pioneers around the late 19th century to early 20th centuries, although the work of Sir George Cayley has recently been dated as being from the last decade of the 18th to mid 19th century. One of the most important people in the history of aeronautics,[4] Cayley was a pioneer in aeronautical engineering[5] and is credited as the first person to separate the forces of lift and drag, which are in effect on any flight vehicle.[6] Early knowledge of aeronautical engineering was largely empirical with some concepts and skills imported from other branches of engineering.[7] Scientists understood some key elements of aerospace engineering , like fluid dynamics, in the 18th century. Several years later after the successful flights by the Wright brothers, the 1910s saw the development of aeronautical engineering through the design of World War I military aircraft.

The first definition of aerospace engineering appeared in February 1958.[2] The definition considered the Earth's atmosphere and the outer space as a single realm, thereby encompassing both aircraft (aero) and spacecraft (space) under a newly coined word aerospace. The National Aeronautics and Space Administration was founded in 1958 as a response to the Cold War. United States aerospace engineers launched the first American satellite on January 31, 1958 in response to the USSR launching Sputnik on October 4, 1957.[8] 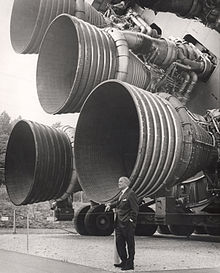 Wernher von Braun, with the F-1 engines of the Saturn V first stage at the US Space and Rocket Center
See also: List of aerospace engineering topics

Some of the elements of aerospace engineering are:[9][10]

A fighter jet engine undergoing testing. The tunnel behind the engine muffles noise and allows exhaust to escape.

The basis of most of these elements lies in theoretical mathematics, such as fluid dynamics for aerodynamics or the equations of motion for flight dynamics. There is also a large empirical component. Historically, this empirical component was derived from testing of scale models and prototypes, either in wind tunnels or in the free atmosphere. More recently, advances in computing have enabled the use of computational fluid dynamics to simulate the behavior of fluid, reducing time and expense spent on wind-tunnel testing.

In Canada, the University of Toronto has a quality aerospace engineering program. The aerospace program requires the students to go through a competitive program called Engineering Science. The academic program in aerospace science and engineering at U of T includes undergraduate and graduate studies. At the graduate level U of T offers research-intensive programs leading to MASc and PhD degrees, and a professionally-oriented program leading to the MEng degree. The scope of U of T's research includes aeronautical engineering (aircraft flight systems, propulsion, aerodynamics, computational fluid dynamics, and structural mechanics) and space systems engineering (spacecraft dynamics and control, space robotics and mechatronics, and microsatellite technology). Carleton University and Ryerson University are other top aerospace and mechanical engineering universities in Canada which offer accredited graduate and under-graduate degrees.[16][17][18] The Royal Military College of Canada offers an Aerospace engineering degree offered by the Aerospace and Mechanical Engineering Department since 2008. It is a rigorous program with a high amount of additional credits students must earn.[19]

Another university that offers Aerospace Engineering degrees (B.Sc, M.Sc, M.Eng, Phd) is the Technion - Israel Institute of Technology, in Israel.

In Brazil the B.Sc, M.Sc and PhD degrees in Aerospace Engineering are offered by the some prestigious Universities like: Universidade de São Paulo - USP at São Carlos campus, Instituto Tecnologico de Aeronautica - ITA and Universidade Federal de Minas Gerais - UFMG. The admission for these courses features among the most difficult in Brazil, partly due to its competitive Vestibular (similar to ACT and SAT in USA).

The term "rocket scientist" is sometimes used to describe a person of great intelligence since "rocket science" is seen as a practice requiring great mental ability, especially technical and mathematical ability. However, the term is a misnomer[24] in that 'science' is the study of nature, whereas 'engineering' encompasses the application of science for the design and manufacturing of vehicles such as rockets and spacecraft.

The term is also used to describe a task or idea as being easy as compared to rocket science, which is perceived as a very difficult field. Usually used as a statement such as "It's not rocket science!"