Memorial to Homosexuals persecuted under Nazism

Memorial to Homosexuals persecuted under Nazism 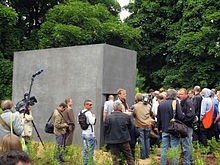 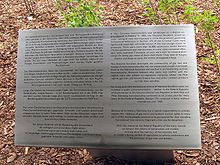 The Memorial to Homosexuals persecuted under Nazism in Berlin was opened on 27 May 2008.[1]

The Memorial was designed by artists Michael Elmgreen and Ingar Dragset.

The Cuboid is made of concrete. On the front side of the cuboid is a window, through which visitors can see a short film of two kissing men. The work is the third of its kind in Germany following Frankfurter Engel (1994) in Frankfurt and Kölner Rosa Winkel (1995) in Cologne.

The memorial was discussed by all parties in the Bundestag, which granted permission in 2003.[2]

Near the memorial is a signboard, which is written in German and English. There visitors can read over persecutions during Nazism and under Paragraph 175, the law during 1950s and 1960s that outlawed homosexuality. It was reformed in 1969 and fully repealed in 1973.

The homosexual victims of Nazism were not officially recognized after 1945. During 1950s and 1960s, Paragraph 175 was still part of the German penal code. In the 1980s, these "forgotten victims" were finally discussed. In 1985, for instance, president Richard von Weizsäcker remembered homosexuals as a "victim group". The group Der homosexuellen NS-Opfer gedenken and the organization Lesben- und Schwulenverband began promoting a memorial in Berlin in 1993. [3]

On 2003, 12 December, the Bundestag approved erecting a memorial in Berlin at the boundary of Tiergarten (near to Memorial to the Murdered Jews of Europe). Then the competition for artists started.

After the competition for an artist, which Michael Elmgreen and Ingar Dragset won, a discussion was held regarding the video, specifically whether to include lesbians kissing. Lesbians victimized under Nazism have not been documented, though there are instances recorded of lesbian pubs in cities like Berlin which were lost. The feminist magazine EMMA protested that the memorial should also be to persecuted lesbian people. As result of the discussion, the video will be changed every two years and will also show kissing lesbians.[6]