A ship prefix is a combination of letters, usually abbreviations, used in front of the name of a civilian or naval ship.

Prefixes for civilian vessels may either identify the type of propulsion, such as "SS" for steamship, or purpose, such as "RV" for research vessel. Civilian prefixes are often used inconsistently, and frequently not at all. Sometimes a slash is used to separate the letters, as in "M/S".

Naval prefixes came into use as abbreviations for longer titles, such as "His/Her Majesty's Ship" in the Royal Navy, abbreviated "H.M.S." and then "HMS". Earlier uses often included the type of vessel, as for instance "U.S.F." ("United States Frigate") for frigates of the United States Navy. Today the common practice is to use a single prefix for all warships of a nation's navy, and other prefixes for auxiliaries and ships of allied services, such as coast guards.

From the 20th century onwards, most navies identify ships by hull numbers — identification codes typically painted on the side of the ship. Each navy has its own system: the United States Navy uses hull classification symbols, and the Royal Navy and other navies of Europe and the Commonwealth use pennant numbers.

These tables list both current and historical prefixes known to have been used. 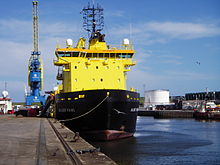 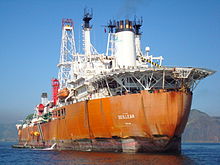 The designations for United Kingdom ships applied at the time of the British Empire, before the establishment of separate navies for the Dominions.

In the Royal Netherlands Navy, "HNLMS" is the prefix in English, a translation of the Dutch original "Hr.Ms." or "Zr.Ms.". "Hr.Ms." should preferably not be used in English-language documents; nevertheless it is often seen on the World Wide Web. Until the moment a Dutch naval ship officially enters active service in the fleet, the ship's name is used without the prefix.[citation needed]

In Australia, the prefix NUSHIP is used to denote ships that have yet to be commissioned into the fleet.[citation needed]

In the United States Navy, all prefixes other than "USS," "USNS", "USNV", and "USRC" were made obsolete in 1901 when President Theodore Roosevelt signed into law a bill fixing American naval nomenclature. USRC was replaced by USCGC when the Revenue Cutter Service became the United States Coast Guard in 1915.[citation needed]

A United States ship that has not yet been commissioned in the Navy does not hold the title of USS, it holds the title of PCU (Pre-commissioned unit). For example, say a shipyard is building a new aircraft carrier, the Flattop. From the date the keel is laid to the date it is commissioned, it is called the PCU Flattop.[7] Only after it enters active service in the fleet and is commissioned will it be referred to as USS Flattop.[8]

By law, the U.S. Navy may not purchase foreign-built ships, but it may lease them as United States Naval Vessels.[6]

When it is stricken from the fleet list, a ship typically has the prefix "ex-" added to its name, to distinguish it from any active ships bearing the same name. For example, after USS Constellation (CV-64) was retired in 2003, she became referred to as ex-Constellation.[citation needed]

Note that while calling a US ship "the USS Flattop" may make grammatical sense, the preliminary article "the" is discouraged by nearly all style guides, and the U.S. Navy. The U.S. Navy uses ship names without article, except for USS The Sullivans, named for the five Sullivan brothers, all lost at sea during World War II.[citation needed] Its British equivalent ("the HMS Flattop") is also discouraged, since "the Her Majesty's Ship" would be grammatically incorrect.

In 1939, the British Ministry of Shipping adopted a standard naming system whereby all merchant ships ordered to be built in Britain to Government account, except very small ship types, would be given the prefix Empire to their name. This applied to ships acquired through purchase, requisition, or taken in prize, with some exceptions. It also applied to older ships acquired from the USA, modern ships acquired on Lease/Lend arrangements, salved and refitted ships, and captured enemy ships.[citation needed]