The ancient Roman units of measurement were built on the Hellenic system with Egyptian, Hebrew, and Mesopotamian influences. The Roman units were comparatively consistent and well documented.

The Romans also had a unit of area called a quinaria, which was used to measure the cross-sectional area of pipes. One quinaria was considered to be roughly 4.2 cm².

Note:  Some researchers assert that the Roman surveyors used a perch of ten Greek "Pous of Kyrenaika", i.e. 3.087 m instead of the perch of ten of their own feet, equal 2.964 m.
According to this hypothesis  – currently not supported by the majority of modern metrologists –; all the Roman area measures should be multiplied by 625/576, i.e. 8.5 % larger.
If the irrefutable proof for the real existence of a Roman surveyor perch of 10 Roman feet  6⅔ digits can be adduced, then the saltus equates to one Roman square mile exactly.

The Roman jar, so-called "amphora quadrantal" is the cubic foot. The congius is half-a-foot cubed. The Roman sester is the sixth of a congius. 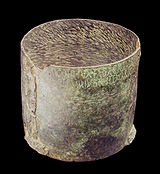 Like the jar, the Roman bushel or "quadrantal" is one cubic foot. It is almost 26.027 litres. One-third of a quandrantal is a Roman peck.

The units of weight (mass) were mostly based on factors of 12. Several of the unit names were also the names of coins during the Roman Republic and had the same fractional value of a larger base unit: libra for mass and as for coin. The modern mass of the libra is estimated to range from 322 to 327 grams (11.4 to 11.5 oz).[2]

One and a half ounces was called by Romans "sescuncia". The Roman pound is exactly three quarters of the Greek mine. Thus the Greek and Roman drachm is related by the ratio 32 to 25.[citation needed]

The complicated Roman calendar was replaced by the Julian calendar in 45 BC. In the Julian calendar, an ordinary year is 365 days long, a leap year is 366 days long. Between 45 BC and 1 AD, leap years occurred at irregular intervals. Starting in the year 4 AD, leap years occurred regularly every four years. Year numbers were rarely used; rather, the year was specified by naming the Roman consuls for that year. When a year number was required, the Greek Olympiads were used, or the count of years since the founding of Rome, "Ab urbe condita" in 753 BC. In the middle ages, the year numbering was changed to the Anno Domini count.

Our currently used Gregorian calendar differs from the Julian calendar in that it skips three leap years every four centuries to more closely approximate the length of the tropical year.

The Romans grouped days into an eight-day cycle called a nundina, with every eighth day being a market day.

Independent of the nundinae, astrologers kept a seven-day cycle called a hebdomada where each day corresponded to one of the seven classical planets, with the first day of the week being Saturn-day, followed by Sun-day, Moon-day, Mars-day, Mercury-day, Jove-day, and lastly Venus-day. Each astrological day was reckoned to begin at sunrise. The Jews also used a seven-day week, which began Saturday evening. The seventh day of the week they called the Sabbath; the other days they numbered rather than named, except for Friday, which could be called either the Parasceve or the sixth day. Each Jewish day was reckoned to begin at sunset. Christians followed the Jewish seven-day week, except that they commonly called the first day of the week the Dominica, or the Lord's day. In 321 Constantine the Great gave his subjects every Sunday off in honor of his family's tutelary deity, the Unconquered Sun, thus cementing the seven-day week into Roman civil society.

Astrologers divided the solar day into 24 equal hours, and these astrological hours became the basis for medieval clocks and our modern 24 hour mean solar day.

Although the division of hours into minutes and seconds did not occur until the middle ages, ancient astrologers had a minuta equal to a 60th of a day, and a secunda equal to one 3600th of a day.