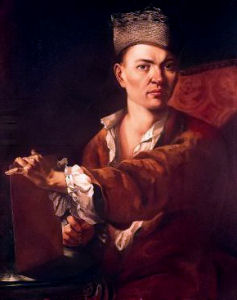 Paul Troger (, &ndash; , ) was an n painter, draughtsman and of the late period. Troger's s in are notable for their dramatic vitality of movement and their palette of light colors.

Paul Troger’s style, particularly in his frescoes, dominated Austrian painting until the end of the 18th century and profoundly influenced significant artists of the next generation, notably , , .

In 1722, the sent Paul Troger to Venice, where he discovered the works of , and . Troger also studied in Rome with , in Naples with and in Bologna, the leading artistic centers of Italy at the time.On his return to Austria, Troger first worked in from 1726 to 1728, where he painted the "Glory of " on the ceiling of St. Cajetan’s Church, Salzburg (1728). He afterwards established himself in , where the art of ceiling frescoes was, however, dominated by and

Paul Troger became the favourite fresco painter in n monasteries in collaboration with the architect . In 1753, he joined the Imperial Academy of Fine Arts. Troger became professor and was made director of the Imperial Academy in 1754. His most prominent student was . His most important contribution to Austrian painting was to reject the strong dark palette, typical of the beginning of the 18th century, in favor of an increasingly lighter palette, typical of the new Rococo taste.