/ˈzɪldʒⁱən/[1]) is a cymbal manufacturer founded in Istanbul by Armenian Avedis Zildjian in the 17th century during the Ottoman Empire. At nearly 400 years old, Zildjian is one of the oldest companies in the world. It also sells drum-related accessories, such as drum sticks and cymbal bags.

On December 20, 2010, it was announced that Avedis Zildjian Company had merged with Vic Firth, Inc.[2] According to the announcement, both companies will continue to run autonomously.[2]

The first Zildjian cymbals were created in 1623 by Avedis Zildjian, an alchemist who was looking for a way to turn base metal into gold; he created an alloy combining tin, copper, and silver into a sheet of metal that could make musical sounds without shattering. Avedis was given the name of Zildjian (Zilciyân) by the Sultan Osman II[3] (from the Turkish word zil – cymbal, dji – maker-seller, ian – a common suffix used in Armenian last names which means 'son of') and began an industry in 1623, the details of whose main product remained secret for generations. It became family tradition that only the company's heirs would know the manufacturing process.

The Zildjian Company moved from manufacturing noisemakers to frighten the enemies of the Ottoman Empire to manufacturing its cymbals as musical instruments in the 19th century.[citation needed]

Around 1928, Avedis III, his brother Puzant, and Aram Zildjian began manufacturing cymbals in Quincy, Massachusetts, and the Avedis Zildjian Co. was formed in 1929, the year the Great Depression began, in competition with the K. Zildjian company in Turkey. Avedis made many innovations in cymbals that are still around today; he was the first to develop drum-set cymbals and gave cymbals names such as ride, crash, splash, and hi-hat. Jazz drummers such as Gene Krupa, Buddy Rich, Louie Bellson, Shelly Manne, Cozy Cole, and Papa Jo Jones all used Avedis Zildjian cymbals.[citation needed]

Avedis III's son Armand Zildjian, also known as the "Father of Artist Relations," also began hand-selecting cymbals for all the top drummers. It was his close personal relationships with the top drummers and percussionists of the day on which Zildjian still bases its Artist Relations Department. In 1968, the K. Zildjian Co. and all European trademarks were bought back on behalf of the Avedis Zildjian Co. Also in 1968, Avedis split production into two separate operations, opening the Azco factory in Meductic, New Brunswick, Canada.

From 1968 to 1970, the Azco factory produced Zilco cymbals. There were two types of Zilco: one was a thin rolling produced without any hammering, which cut costs. At about this time in the Azco factory, the modern process for pressing cymbals into shape came about. Before this it was done by bumping with the Quincy drop hammer.[citation needed]

In 1970, Zildjian needed all their production capabilities at Azco for their regular Zildjian line, so the factory in Quincy (the then location of Zildjian) would send up castings to be finished into cymbals at Azco.

In early 1977, Armand Zildjian was appointed President of the Avedis Zildjian Company by his father. Soon after, Robert Zildjian split from the company amidst conflict with his brother, Armand. Shortly thereafter, in 1981, Robert started making Sabian cymbals in the Meductic Azco factory.[citation needed]

After taking over in 1981, Armand was awarded a number of honors from his 65-year career. 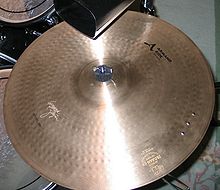 In keeping with tradition, Armand passed the Zildjian Secret Alloy to his daughters, Craigie and Debbie (14th generation), both of whom continue to run the family business from the current factory in Norwell, Massachusetts.

Other than cymbals, the Avedis Zildjian Company produces products such as drum sticks and other drum accessories. The Artist Series drum sticks allow these endorsers to personalize their drum sticks, and these sticks are sold to the public.

Zildjian's sheet bronze cymbals are made out of identical bronze discs, which are shaped, hammered, and lathed to their direct specifications. These cymbals have a higher pitch than their cast bronze counterparts and produce a more consistent sound.

All of Zildjian's cast bronze cymbals contains 80% copper and 20% tin with traces of silver in its alloy. 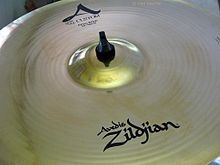