An optical communication system consists of a transmitter, which encodes a message into an optical signal, a channel, which carries the signal to its destination, and a receiver, which reproduces the message from the received optical signal. 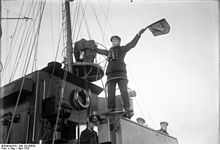 There are many forms of non-technological optical communication, including body language and sign language.

Techniques such as semaphore lines, ship flags, smoke signals, and beacon fires were the earliest form of technological optical communication.

The heliograph uses a mirror to reflect sunlight to a distant observer. By moving the mirror the distant observer sees flashes of light that can be used to send a prearranged signaling code. Navy ships often use a signal lamp to signal in Morse code in a similar way.

Distress flares are used by mariners in emergencies, while lighthouses and navigation lights are used to communicate navigation hazards.

Aircraft use the landing lights at airports to land safely, especially at night. Aircraft landing on an aircraft carrier use a similar system to land correctly on the carrier deck. The light systems communicate the correct position of the aircraft relative to the best landing glideslope. Also, many control towers still have an Aldis lamp to communicate with planes whose radio failed.

Optical fiber is the most common medium for modern digital optical communication.

Free-space optical communication is also used today in a variety of applications.

Optical fiber is the most common type of channel for optical communications, however, other types of optical waveguides are used within computers or communications gear, and have even formed the channel of very short distance (e.g. chip-to-chip, intra-chip) links in laboratory trials. The transmitters in optical fiber links are generally light-emitting diodes (LEDs) or laser diodes. Infrared light, rather than visible light is used more commonly, because optical fibers transmit infrared wavelengths with less attenuation and dispersion. The signal encoding is typically simple intensity modulation, although historically optical phase and frequency modulation have been demonstrated in the lab. The need for periodic signal regeneration was largely superseded by the introduction of the erbium-doped fiber amplifier, which extended link distances at significantly lower cost.

Free Space Optics (FSO) systems are generally employed for 'last mile' communications and can function over distances of several kilometers as long as there is a clear line of sight between the source and the destination, and the optical receiver can reliably decode the transmitted information. IrDA is an example of low-data-rate, short distance free-space optical communications using LEDs.