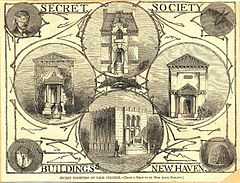 A secret society is a club or organization whose activities and inner functioning are concealed from non-members. The society may or may not attempt to conceal its existence. The term usually excludes covert groups, such as intelligence agencies or guerrilla insurgencies, which hide their activities and memberships but maintain a public presence. The exact qualifications for labeling a group as a secret society are disputed, but definitions generally rely on the degree to which the organization insists on secrecy, and might involve the retention and transmission of secret knowledge, denial of membership in or knowledge of the group, the creation of personal bonds between members of the organization, and the use of secret rites or rituals which solidify members of the group.

Anthropologically and historically, secret societies are deeply interlinked with the concept of the Mannerbund, the all-male "warrior-band" or "warrior-society" of pre-modern cultures (see H. Schurtz, Alterklassen und Mannerbunde, Berlin, 1902; A. Van Gennep, The Rites of Passage, Chicago, 1960).

Several definitions for the term have been put forward. The term "secret society" is used to describe fraternal organizations that may have secret ceremonies and means of identification and communication, ranging from collegiate fraternities to organizations described in conspiracy theories as immensely powerful, with self-serving financial or political agendas).[citation needed]

A purported "family tree of secret societies" has been proposed, although it may not be comprehensive.[2]

Application of the term is often hotly disputed, as it can be seen as pejorative.[citation needed]

Therefore, the criteria that can be adopted as a definition for the term are important for which organizations any one definition would include or exclude.[citation needed]

Alan Axelrod, author of the International Encyclopedia of Secret Societies and Fraternal Orders, defines a secret society as an organization that:

David V. Barrett, author of Secret Societies: From the Ancient and Arcane to the Modern and Clandestine, uses slightly different terms to define what does and does not qualify as a secret society. He defines it as any group that possesses the following characteristics:

Barrett goes on to say that "a further characteristic common to most of them is the practice of rituals which non-members are not permitted to observe, or even to know the existence of." Barrett's definition would rule out many organizations called secret societies; graded teaching are not part of the American college fraternities, the Carbonari, or the Know Nothings.[citation needed]

Many organizations require members to take an oath at membership, not just secret societies. Such oaths often include promises to keep certain things about the organization secret.

Since some secret societies have political aims, they are illegal in several countries. Poland, for example, has included a ban of secret political parties and political organizations in its constitution.[3]

President John F Kennedy, in the Address to the ANPA 1961, included the subject of Secret Societies and their implications in the Address, where he said the following:

The very word "secrecy" is repugnant in a free and open society; and we are as a people inherently and historically opposed to secret societies, to secret oaths and to secret proceedings. We decided long ago that the dangers of excessive and unwarranted concealment of pertinent facts far outweighed the dangers which are cited to justify it. Even today, there is little value in opposing the threat of a closed society by imitating its arbitrary restrictions. Even today, there is little value in ensuring the survival of our nation if our traditions do not survive with it. And there is very grave danger that an announced need for increased security will be seized upon by those anxious to expand its meaning to the very limits of official censorship and concealment. That I do not intend to permit to the extent that it is in my control. And no official of my Administration, whether his rank is high or low, civilian or military, should interpret my words here tonight as an excuse to censor the news, to stifle dissent, to cover up our mistakes or to withhold from the press and the public the facts they deserve to know.[4]

Many student societies established on university campuses in the United States have been considered secret societies. Perhaps one of the most famous secret college societies is the Skull and Bones at Yale. The University of Virginia also has a long history of secret societies playing an active role in University life. The influence of undergraduate secret societies at colleges such as Rutgers University[not in citation given], Harvard College, and Wellesley College has been publicly acknowledged, if anonymously and circumspectly, since the 19th century.[5][6]

British Universities, too, have a long history of secret societies or quasi-secret societies such as The Pitt Club at Cambridge University,[7][8] Bullingdon Club at Oxford University,[8] the 16' Club at St David's College[9] and the Speculative Society at the University of Edinburgh.[citation needed].

Secret societies are disallowed in a few colleges. Virginia Military Institute has rules that no cadet may join a secret society,[10] and secret societies have been banned at Princeton University since the beginning of the 20th century.