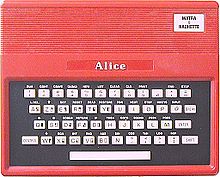 The Matra & Hachette Ordinateur Alice was a home computer sold in France beginning in 1983. It was a clone of the TRS-80 MC-10, produced through a collaboration between Matra and Hachette in France and Tandy Corporation in the United States.

The Alice is distinguished by its unique, bright red casing. Functionally, it is equivalent to the MC-10, with a Péritel (SCART) connector replacing the RF modulator for video output.

Unlike its progenitor, the Alice became a popular computer in its home country[citation needed], aided by its presence in schools as part of the country's Informatique pour tous ("Information technology for everyone") programme.

All other specifications should be comparable to those of the TRS-80 MC-10, but have not been confirmed.