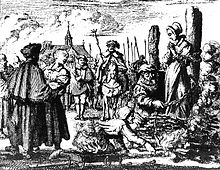 Preparing to burn a witch in 1544. Witch-hunts are an example of mass behavior fueled by moral panic.

A moral panic is the intensity of feeling expressed in a population about an issue that appears to threaten the social order.[1] According to Stanley Cohen, author of Folk Devils and Moral Panics (1972) and credited creator of the term, a moral panic occurs when "[a] condition, episode, person or group of persons emerges to become defined as a threat to societal values and interests."[2] Those who start the panic when they fear a threat to prevailing social or cultural values are known by researchers as "moral entrepreneurs", while people who supposedly threaten the social order have been described as "folk devils."

Moral panics are in essence controversies that involve arguments and social tension and in which disagreement is difficult because the matter at its center is taboo.[3] The media have long operated as agents of moral indignation, even when they are not self-consciously engaged in crusading or muckraking. Simply reporting the facts can be enough to generate concern, anxiety or panic.[4]

While many believe the term was coined by Stanley Cohen to describe press reporting and the reaction of the establishment to the behaviour of mods and rockers, it was actually first used by his colleague Jock Young in reference to the reaction to drug takers in Notting Hill.[1]

Many sociologists have pointed out the differences between definitions of a moral panic for American and British sociologists. Kenneth Thompson has said that American sociologists tend to emphasize psychological factors whereas the British portray moral panics as crises of capitalism.[5]

In Policing the Crisis: Mugging, the State and Law and Order (1978), Stuart Hall and his colleagues studied the reaction to the importation of the previously American phenomenon of mugging into the UK. Employing Cohen's definition of moral panic, Hall et al. theorized that the "rising crime rate equation" performs an ideological function relating to social control. Crime statistics, in Hall's view, are often manipulated for political and economic purposes. Moral panics (e.g., over mugging) could thereby be ignited to create public support for the need to "police the crisis." The media play a central role in the "social production of news" to reap the rewards of lurid crime stories.[6]

Moral panics have several distinct features. According to Goode and Ben-Yehuda, moral panic consists of the following characteristics:

Jewish victims of a pogrom in Ekaterinoslav in 1905

Moral panics are considered to include some persecutions of individuals or groups, such as anti-Semitic pogroms, Stalinist purges, the witch-hunts of Renaissance Europe. Most recently, various Muslim groups claim that some actions in Western countries following the September 11 attacks affecting Arabs, Muslims, or those mistaken for them have comprised a moral panic.[7] A series of moral panics regarding Satanic ritual abuse originated in the U.S and spread to other English-speaking countries in the 1980s and 1990s.[8][9][10][11] In the 1990s and 2000s, there have been instances of moral panics in the UK and the US related to colloquial uses of the term pedophilia to refer to unusual crimes of abuse such as high-profile cases of child abduction and murder.[9]

Many critics of contemporary anti-prostitution activism argue that much of the current concern about human trafficking and its more general conflation with prostitution and other forms of sex work have all the hallmarks of a moral panic. They further argue that this moral panic shares much in common with the "white slavery" panic of a century earlier.[12][13][14][15]

Various researchers have shown that fears of increasing crime or an increase in certain types of crime are often the cause of moral panics (Cohen, 1972; Hall et al. 1978; Goode and Ben-Yehuda 1994). Recent studies have shown that despite declining crime rates, this phenomenon continues to occur in various cultures. Japanese jurist Koichi Hamai (浜井浩一) points out how the changes in crime recording in Japan since the 1990s led to the widespread view that the crime rate is rising and that crimes are increasingly severe. This became an election issue in 2003 with a moral panic over the "collapsing safe society."[16] Some critics have pointed to moral panic as an explanation for the War on Drugs. For example a Royal Society of Arts commission concluded that "the Misuse of Drugs Act 1971, ... is driven more by 'moral panic' than by a practical desire to reduce harm."[17]

At various times in its history, Dungeons & Dragons (a fantasy role-playing game) has received negative publicity for alleged promotion of such practices as Satanism, witchcraft, suicide, pornography and murder. In the 1980s especially, some religious groups accused the game of encouraging interest in sorcery and the veneration of Demons.[18] Throughout the history of roleplaying games, many of these criticisms have been aimed specifically at Dungeons & Dragons, but touch on the genre of fantasy roleplaying games as a whole. It has been suggested that the recent drive to regulate video games is another instance of moral panic over the content of popular culture.[19][20][21] The industry response has been to create a self-regulatory ratings system similar to that used by the film industry.[22]

In Iran, the feminine ideals and independent lifestyle represented by the fashion doll Barbie are considered a threat to Iranian values, "more harmful than an American missile."[23] In Saudi Arabia, Barbie was banned by the religious police as a moral threat to Islam.[24] Also in Saudi Arabia, the police issued a decree banning the sale of dogs and cats, seen as a sign of Western influence. The decree applies to the city of Jeddah and the holy city of Mecca and bans the sale of cats and dogs because "some youths have been buying them and parading them in public," according to a memo from the Municipal Affairs Ministry to Jeddah’s city government.[25]

In Folk Devils and Moral Panics, Cohen outlines some of the criticisms that have arisen in response to moral panic theory. One of these is of the term "panic" itself, as it has connotations of irrationality and a lack of control. Cohen maintains that "panic" is a suitable term when used as an extended metaphor. Another criticism is that of disproportionality. The problem with this argument is that there is no way to measure what a proportionate reaction should be to a specific action.[26] Others have criticized Cohen's work stating that not all the folk devils expressed in his work are vulnerable or unfairly maligned. Jewkes has also raised issue with the term 'morality' and how it is accepted unproblematically in 'moral panics'.[27]

The British television show Brass Eye, written by and starring Chris Morris, attempted to satirise moral panic, most notably in the episodes 'Drugs' and the special 'Paedogeddon'. In these episodes, celebrities and politicians were duped into appearing in fictional campaigns against particular social ills, thus demonstrating the tendency for both such groups towards jumping onto the bandwagon of campaigns against social problems, principally to raise their own profiles.