Coutts & Co. (commonly abbreviated to Coutts) is one of the UK's private banking houses, now wholly owned by the Royal Bank of Scotland (RBS). RBS acquired Coutts and all of its overseas subsidiaries when it bought NatWest. On 1 January 2008, Coutts' international businesses were renamed RBS Coutts, aligning them more closely with the parent RBS Group. Coutts offers a range of private banking services, including investment and wealth management and advisory services.

The bank which was to become Coutts & Co, was originally known as Campbells Bank. It was formed in 1692 by a young Scots goldsmith-banker, John Campbell of Lundie, Scotland. He set up business in Strand, London, under a sign of the Three Crowns. Today, the Coutts logo still has the three crowns, and its headquarters is still in Strand.[1]

Campbell died in 1712, leaving the business to members of his family. The dominant force was Campbell's son in law, George Middleton, who had become Campbell's partner in 1708. During the years of Middleton's stewardship, the bank was going downhill, buffeted by one crisis after another. The Jacobite revolution of 1715 threatened the stability of the banking system, John Law, the Comptroller of France's finances, owed a great deal of money to the bank when the Mississippi Company bubble burst in 1720 and the English stock market collapsed in the same year. Stability for the bank did not return until 1735. John's son, George Campbell was also a partner, and ultimately became the sole partner after the death of Middleton in 1747, after which the bank was renamed the "Bankers of 59 Strand".

In 1755, John Campbell's granddaughter, Mary (known as "Polly"), married a merchant, James Coutts. Polly was George Campbell's niece and George immediately made James a partner. The bank was renamed Campbell & Coutts. James ran the business. Following Polly's and George's deaths in 1760, James became the sole partner. George bequeathed most of his fortune, and the bank, to James.

Throughout the 20th century, Coutts opened more branches. The first West End branch outside 440 Strand was opened in 1921 in Park Lane. It was not until 1961 that the Bank moved outside the capital, opening its first out-of-town branch at Eton.

Coutts embraced modern technology, becoming one of the first banks to bring in machine-posted ledgers at the end of the 1920s. In 1963 it was the first British bank to have a fully computerised accounting system. In 1987, Coutts gained international representation when Coutts established operations in Geneva. In October 1990, Coutts and NatWest decided to strengthen their representation internationally and the Coutts Group was created when subsidiaries already owned by Coutts and NatWest (including Handelsbank) were merged.

In 1761 James took his brother Thomas Coutts in to the business, which was now named James and Thomas Coutts.

James and Thomas did not always get on and eventually James drifted into politics, leaving the running of the bank to Thomas. James retired from the bank in 1775 due to ill health. The bank in the Strand became known as Thomas Coutts & Co.

Thomas Coutts married twice. His first wife, a servant named Susannah Starkie, was considered to be beneath his station. She gave him three beautiful daughters nicknamed "The Three Graces" who eventually married leading figures in British society: the Earl of Guildford, the Marquess of Bute and Sir Francis Burdett. Thomas also had four sons who died in infancy. When Susannah died, he remarried just four days after the funeral. Thomas Coutts was 80 years old, and his new wife, Harriot Mellon, was 40 years younger and an actress, which stirred considerable comment. On Thomas' death in 1822 the bank was renamed "Coutts & Co."

Thomas' widow, Harriot, inherited £900,000 from Thomas along with the bank. Although she did not get on with her stepdaughters, she wanted to keep the bank in the Coutts family. Harriot died in 1837. In her will, the Coutts fortune was passed on to Thomas's granddaughter, Angela Burdett, the daughter of Sophie Coutts and Sir Francis Burdett. The will contained three conditions: Firstly the bank was to be held in Trust, secondly that the heir should take the name of Coutts, and thirdly that the heir may never marry a foreigner.

Upon receipt of her staggering inheritance Angela Burdett-Coutts became the wealthiest woman in Britain. She devoted her life to philanthropy, giving away more than £3 million. Her charity ranged widely: she supported the Anglican Church and the arts, but the main thrust of her charity was directed toward improving the lives of the poor. A sewing school in Spitalfields, cotton gins in Nigeria, boats and nets for the Irish fishing industry and ragged schools in the poorest sections of cities were but a few of her projects. Gladstone the Prime Minister and Queen Victoria resolved to acknowledge her philanthropic spirit formally.

Thus in 1871 she was granted a peerage in her own right: Baroness Burdett-Coutts of Highgate and Brookfield in the County of Middlesex. In 1880 it became known that the Baroness wished to marry her young American secretary William Ashmead-Bartlett, who was her junior by forty years. The partners of the bank were aghast at the prospect of such a marriage, as were many dignitaries. They saw Bartlett as an adventurer, only interested in her money. The Archbishop of Canterbury attempted to try and dissuade such a marriage from occurring. Even Queen Victoria, with whom the Baroness had often dined, intervened to try and prevent what she called the "mad marriage". In a letter the Queen wrote to Lord Harrowby she stated that it would grieve her much "if Lady Burdett-Coutts were to sacrifice her high reputation and her happiness by such an unsuitable marriage". This letter was passed on to Angela who asked Lord Harrowby to reply that he had no knowledge of the subject alluded to—quite a snub to the Queen. One potential stumbling block to the marriage was her step-grandmother's (Harriot's) will which forbade marriage to an alien, and as Bartlett was an American the marriage would cause her to be disinherited. Clara, her sister would have been next in line and would have succeeded in her place. Clara was persuaded by Angela to waive her right. However, Clara's son Francis (known as Frank), was not so easily persuaded, and consulted his lawyers thinking he might dissuade the marriage by insisting on their rights. Finally Bartlett himself, in the face of immense pressure from society, offered to release the Baroness from his offer of Marriage. However, the Baroness remained determined and refused to release Bartlett from his promise, in spite of various scandalous accusations being made against him involving another woman, and even the fathering of an illegitimate baby.

In February 1881, at the age of 67, the Baroness broke the terms of the will by marrying the foreigner in Christ Church, Down Street, Piccadilly. The partners of the bank rushed to re-assure the press that Angela was neither a partner in the bank, nor could she touch the capital. An argument sprang up over the inheritance and in particular over whether the Baroness should give up the bank in favour of her sister Clara. The Baroness fought back claiming that Bartlett was only half American and therefore not technically an "alien". Angela's sister, Clara, claimed the fortune, and the bitter dispute continued. In anticipation of victory, Clara and her son Frank took the name "Coutts" – as required by the will. Finally a compromise was struck and the majority of the Coutts fortune passed to Clara and her heirs. However Angela kept two fifths of the income until her death in 1906.

Clara Burdett, who had married James Money in 1850 became Clara Burdett Money-Coutts. Her son Francis' full name became Francis Burdett Thomas Nevill Money-Coutts. He was better known as Francis (or Frank) Coutts, a writer and poet. He became 5th Baron Latymer in 1913 and died in 1923.

The following appeared in Punch at the time:-

Money takes the name of Coutts,
Superfluous and fimny*,
For everyone considers Coutts,
Synonymous with Money.

The Panic of 1890 forced the bank to change from a Limited company to a Partnership. At that time, limited liability was seen as risky by depositors. As a partnership, the Coutts family would have been personally liable to any depositor for his bank deposit in a crisis. Fortunately, there was no crisis.

In 1904, the bank moved to its current premises at 440 Strand. In 1914 Coutts took over the bank of Roberts, Lubbock & Co, obtaining a branch office and a clearing house seat in the process.

In 1919, Coutts merged with the National Provincial & Union Bank of England whilst retaining the name "Coutts". In 1961 the first branch outside London was opened in Eton, Berkshire. In 1969 Coutts became part of the National Westminster Bank.

In 2000, National Westminster Bank was purchased by the Royal Bank of Scotland in one of the largest corporate transactions ever in the European banking sector. Today Coutts is part of the Wealth Management division of RBS.

Coutts still has its headquarters at 440 Strand, London, with branches throughout the UK and the rest of the world. 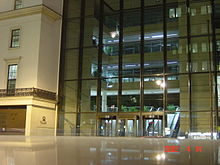 Coutts & Co – Headquarters of Coutts in the Strand, – by Night 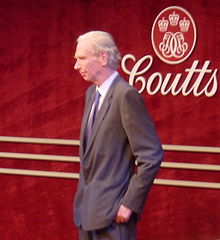 The Earl of Home, Chairman of the Coutts Group

Historically Coutts was a clearing bank to the landed gentry, but today they are seen as wealth managers sometimes willing to accept a wider class of clientele, including entrepreneurs, entertainers, sportsmen, businessmen, chief executives and pop singers. There are however stringent requirements to being accepted as a client, not just based on average and total financial assets. Prospective clients need at least £500,000 (US$800,000) in 'disposable funds', not including houses.[3]

Coutts is known as a bank for the rich and famous of British society and is highly secretive about its client list.

They have a regular presence at the annual Cannes Film Festival[4] and have replaced their famous 'World Signia' charge card with a 'Purple' charge card, designed by Savile Row tailor Ozwald Boateng.[5]

Coutts is mentioned in the 1889 Gilbert and Sullivan Savoy opera The Gondoliers in the following lyrics:

Robert Louis Stevenson mentions Coutts in his 1886 classic novella "Dr Jekyll and Mr Hyde" as being the bank of choice for Dr Jekyll: "...and presently came back with the matter of ten pounds in gold and a cheque for the balance on Coutts's drawn payable to bearer,..."

- other private banks owned by The Royal Bank of Scotland Group