The OPEC Fund for International Development (OFID) is a multilateral development finance institution established in 1976 by the Member Countries of the Organization of the Petroleum Exporting Countries (OPEC). Its objective is to reinforce financial cooperation between OPEC Member Countries and other developing countries, by providing financial support to the latter for their socio-economic development. The resources of OFID are also used to provide grants for food aid, technical assistance, research and similar intellectual activities. [1] One of the institution's central aims is to advance South-South solidarity. [2] OFID has been headquartered in Vienna, Austria since 1976. The current Director-General of OFID is Mr. Suleiman Jasir Al-Herbish of Saudi Arabia. 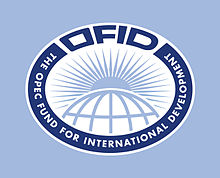 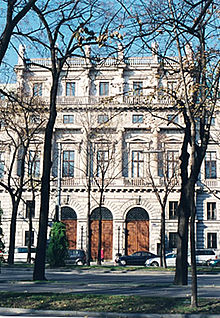 The OFID Headquarters Building (located in Vienna's first district, on the Ringstraße) was the residential palace of the Austrian Archduke Wilhelm Franz Karl. Built between 1864-68 to the architectural design of Theophil von Hansen (1813-1891), the palace was sold to the German Order of Knights (Teutonic Order) in 1870 and used as headquarters of the Grand Master, the last of whom was Archduke Eugen. From 1894, it served as the palace of both the Grand and German Masters, acquiring the name, Palais Deutschmeister. In 1938, following the dissolution of the German Order of Knights, the building was seized by National Socialist (Nazi) Germany and, in 1942, it was handed over to the police authorities. Between 1945-1975 it served as headquarters of the Vienna police. After an interregnum, the building became the property of OFID.

The methods of OFID's funding include public sector loans for development projects and programs, balance of payments support and debt relief under the Heavily Indebted Poor Countries (HIPC) Initiative; trade financing; support to private enterprises; grants for technical assistance, food aid, research and humanitarian relief work; and contributions to the resources of other development organizations whose activities benefit developing countries.

OFID's resources consist of voluntary contributions made by OPEC Member Countries and the accumulated reserves derived from the institution's various operations. At the close of 2008, contributions pledged by member countries totaled $3,435.0 million, out of which $2,463.15 million was direct contributions to OFID. [6]

All developing countries, with the exception of OPEC member countries themselves, are in principle eligible for OFID assistance. The least developed countries, however, are accorded higher priority and have consequently attracted the lion's share of OFID's resources. Today, 121 countries from the developing world - Africa, Asia, Latin America, the Caribbean, the Middle East and Europe - have benefited from OFID's assistance. [7]

This is OFID's traditional financing window which comprises loans for project and program financing and for balance of payments support. The loans are given directly to the governments of cooperating countries to support development operations across a wide range of social and economic sectors. Typical activities financed through this window include agricultural development, the provision of basic infrastructure such as roads, energy supplies, clean water and sanitation services, and the construction of schools and hospitals.

OFID's Private Sector Facility was established in 1998 in response to growing demand among partner countries for investment in private enterprise, which is widely accepted as the engine of economic growth. A diversity of financing instruments is available, including loans, lines of credit, equity, quasi-equity and leasing. Financing may be given directly to private entities or channeled through intermediaries, such as local financial institutions. The Facility supports projects in a broad variety of sectors, from industry, telecommunications and manufacturing, to health, urban development and financial services. The institution's operations in the private sector of partner countries is hinged on the signing of the Agreement for the Encouragement and Protection of Investment, between the countries and OFID.

The OFID grant program provides much-needed financing for development activities that fall outside the scope of its lending operations. These primarily include small-scale social projects, research and studies and humanitarian causes. In addition to its regular program, the grants window encompasses three Special Accounts for: Food Aid to Africa, HIV/AIDS mitigation activities, and relief and reconstruction efforts in Palestine.

Since OFID's inception, technical assistance operations have constituted its core grants activities. Such grants are extended to national and regional development projects that aim at sustainable development and poverty reduction, and that serve the poorest segments of society, particularly those in the Least Developed Countries (LDCs). Women and children, especially, are accorded high priority. Technical assistance grants are awarded largely on the basis of the type of project and its expected outcomes, the number of beneficiaries and the recipient country’s socio-economic situation.

This type of assistance focuses on activities that increase South-South and North-South cooperation and enhance capacity-building, including human resource development, particularly in the LDCs. A heavy emphasis is placed on research topics and studies of particular relevance to poorer countries and on the advancement of science and technology. Human capital is enhanced through the sponsorship of seminars, training courses and workshops.

Emergency assistance from OFID is extended to help mitigate the suffering of victims of all kinds of catastrophes around the world, including OFID Member States. In the interests of sustainable development, OFID often follows up emergency assistance with conventional, low-interest loans to aid longer-term reconstruction in devastated regions. Emergency aid is channelled through specialized relief agencies, such as the IFRC, UNHCR, OCHA and the WFP.

OFID's HIV/AIDS Account was launched in June 2001, with an initial endowment of US$15 million, following authorization from the Ministerial Council. The decision was inspired by a deeply felt obligation to help alleviate the threat of HIV/AIDS “before humanity faces another plague.” Subsequent replenishments have boosted the Account to US$80 million. [10]

OFID has been extending assistance to Palestine since 1979. However, after the second Intifada began in 2000, the socio-economic situation in the area deteriorated so fast that humanitarian and development assistance was required on a much larger scale. In November 2002, and in coordination with its sister organizations, OFID set up its Special Grant Account to address the needs of Palestine. Endowed initially with $10 million, the Special Account has accelerated social and economic assistance to Palestinians in both the West Bank & Gaza. Subsequent replenishments have increased the Account to US$90 million. [11]

The Food Aid account was set up to combat hunger. Although OFID has always responded to famine situations (most notably those of 1981 and 1984), it felt that more substantial assistance was needed in 2003, when drought-prone sub-Saharan Africa faced one of the worst food shortages in living memory. As soon as the scale of the famine became apparent, OFID allocated US$20 million to finance rapid food delivery to the affected population in nine hardest hit African countries. [12]

At the 2006 meeting of OFID’s highest policy-making body, the Ministerial Council, a decision was taken to extend the institution's operations to include trade financing. This resulted in the establishment of a Trade Finance Facility (TFF). The main objective of the TFF is to further enhance the promotion of economic development by supporting the trade financing needs of institutions in partner countries, including governments, parastatals, banks and private enterprises.

Contributions to other organizations

The Common Fund for Commodities (CFC)

OFID was instrumental in the establishment of the CFC in the early 1980s, providing a total of US$83.56 million to its resources. Of this sum, US$37.16 million was given to cover the subscriptions of 35 LDCs to enable them to become members of the CFC. The remaining US$46.4 million is being utilized to help finance projects undertaken by the CFC or the benefit of resource-poor commodity producers in the developing world. [12]

OFID played a significant role in the establishment of IFAD, channeling US$861.1 million in contributions from OPEC Member Countries towards the agency’s initial capital and first replenishment. From its own resources, OFID provided US$20 million to the first replenishment as a special grant. [12]

Energy for the Poor Initiative

In June 2008, the Custodian of the Two Holy Mosques, King Abdullah bin Abdulaziz Al Saud, (Abdullah of Saudi Arabia) placed Energy Poverty on the global agenda, by calling on the World Bank to launch an initiative for impoverished countries known as the "Energy for the Poor Initiative". This initiative, by mobilizing the donor community, aims at providing assistance to help the poor and low-income people to access energy in an affordable way. OFID is helping to coordinate the stakeholders’ actions regarding this initiative in which the World Bank and the Saudi Fund for Development are actively participating. The institution has contributed to the conceptualization of this initiative. OFID has proposed a financial mechanism to reach the dual objective of first, increasing the level of concessionality to make it accessible to the poor countries and second, to achieve a scope and a volume of funding commensurate with the scale of the financial challenge in this domain. OFID has played a catalyst role and suggested blending grants and loans to reach this dual objective. Furthermore, OFID has already identified concrete energy poverty alleviation projects totaling US$500 million. [13] [14]

The Coordination Group of Arab/OPEC/Islamic Development Institutions is a collective body of three bilateral and six multilateral agencies set up to provide greater cohesion and effectiveness in the delivery of Arab aid. Established in 1975, the Group meets twice a year at the level of Director of Operations to share initiatives, synchronize programs, and harmonize approaches and best practices. By pooling information and resources, coordinating efforts and drawing on the combined skills and expertise of its members, the Group has maximized aid effectiveness and cost efficiency, and succeeded to a measurable degree in eliminating duplication and waste. Its members are the Abu Dhabi Fund for Development (ADFD), the Arab Bank for Economic Development in Africa (BADEA), the Arab Monetary Fund (AMF), The Arab Fund for Economic and Social Development (AFESD), The Arab Gulf Program for United Nations Development Organizations (AGFUND), the Islamic Development Bank (IsDB), the Kuwait Fund for Arab Economic Development (KFAED), the OPEC Fund for International Development (OFID) and the Saudi Fund for Development (SFD).