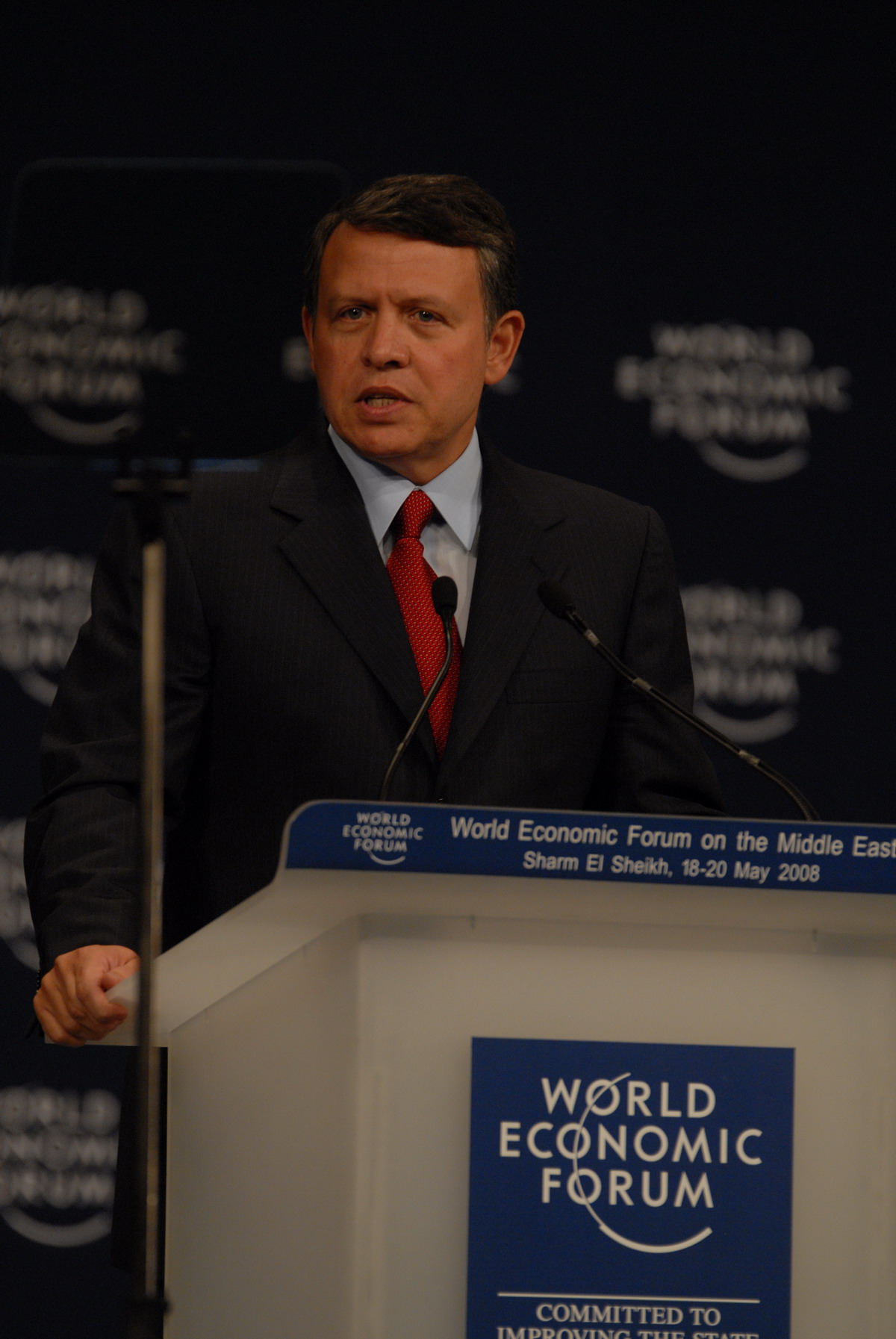 Abdullah II bin al-Hussein, ( _ar. الملك عبد الله الثاني بن الحسين, "al-Malik ʿAbdullāh aṯ-ṯānī bin al-Ḥusayn" born 30 January 1962) is the ruler of the Kingdom of Jordan. He became king of on 7 February 1999 after the death of his father King Hussein. King Abdullah is a member of the family and is reportedly the 43rd-generation direct descendant of prophet

Abdullah was schooled at St. Edmund's School in Surrey, England as well as and in the United States. His university training was at . In 1980, Abdullah left Pembroke and entered the in the United Kingdom as a cadet. He joined the upon commission as a Second the following year. King Abdullah retains close links with the and is the of , a tank regiment and the successor to the 13th/18th Royal Hussars. [ [http://news.bbc.co.uk/2/hi/uk_news/england/norfolk/3528613.stm King of Jordan meets troops in UK] , "BBC News", 3 March 2004. Accessed 3 June 2008.] In 1987, he completed an advanced studies and research program at the at . He took full command of the Jordanian special forces in November 1993, becoming a . He instructed the special forces until 1996, when he was instructed to reorganize the special forces and other special units under the special operation command SOCOM. [ [http://www.special-operations-technology.com/article.cfm?DocID=1361 Exclusive Interview: Partner for Peace] .] Upon assuming his constitutional powers, he became the . King Abdullah holds the ranks of in the Jordan Arab Army and Marshal of the Royal Jordanian Air Force. [Gilani.com.pk (2 May 2007), [http://www.gilani.com.pk/kings/kingsjordan.htm The Hashemite Kingdom Of Jordan] .]

King Abdullah became king on 7 February 1999, upon the death of his father King Hussein. Hussein had recently named him on 24 January, replacing Hussein's brother Hassan who had served many years in the position. Since Abdullah's mother, was British by birth, [ [http://news.bbc.co.uk/2/hi/uk_news/1634962.stm Jordan and the UK: A long and robust relationship] , "BBC News", 6 November 2001. Accessed 3 June 2008.] the decision was not universally popular.Fact|date=December 2007

King Abdullah is the head of a constitutional monarchy in which the King retains substantial power. Jordan's economy has improved under Abdullah, and he has been credited with increasing foreign investment, attending meetings between public and private sectors, and providing the foundation for 's free trade zone. As a result of these reforms, Jordan's economic growth has doubled to 6% annually under King Abdullah's rule compared to the latter half of the 1990s. [ [http://www.imf.org/external/np/ms/2006/112806.htm Jordan—Concluding Statement for the 2006 Article IV Consultation and Fourth Post-Program Monitoring Discussions] , "International Monetary Fund", 28 November 2006. Accessed 3 June 2008.] Healthcare is now easy to receive even in rural parts of Jordan. The adult literacy rate is 90%, [Unicef. " [http://www.unicef.org/infobycountry/jordan_statistics.html At a glance: Jordan] ". Retrieved on 14 December 2007.] one of the highest in the Arab World. Foreign direct investment from the West as well as the countries of the Persian Gulf has continued to increase. [ [http://www.mop.gov.jo/pages.php?menu_id=241&local_type=0&local_id=0&local_details=0&local_details1=0 Trade and Investment] , "Ministry of Planning and International Cooperation". Accessed 22 July 2008.]

Abdullah's speech at The Catholic University of America's in September 2005 was entitled "Traditional Islam: The Path to Peace." While en route to the United States, King Abdullah met with to build on the relations that Jordan had established with to discuss ways in which Muslims and Christians can continue to work together for peace, tolerance, and coexistence. The King announced on 2 March 2007 municipal elections in Jordan and in 25 November 2006 in his parliament address, told the parliament to work on reforms of the press and publication law. [Hussein, Mohammad Ben. [http://www.jordanembassyus.org/11282006005.htm King opens Parliament today] , "Jordan Times", 28 November 2006. Accessed 3 June 2008.]

King Abdullah II has worked for the Middle East Peace Process, attending the Arab Summit in 2002, OIC conferences and having several summits with US, Israeli and Palestinian delegations to find a solution for the . He tried to impose a cease-fire when the Israel-Hezbollah war broke out in the summer of 2006. While keeping strong ties to Israel, the King has invested money into the new Palestinian authority of Mahmoud Abbas, the current President of the PA. He has also helped increase foreign investment in the new Palestinian government.Fact|date=July 2007

Palestinians are given citizenship more easily than Iraqi refugees are. Crossing the border into Jordan from Iraq is not much more difficult than it had previously been before the 2005 Amman bombings by Iraqis working with al-Qaeda.Fact|date=July 2007 The king was expected to pay a lot of attention on domestic policy and domestic issues [http://www.washingtonpost.com/wp-srv/inatl/daily/feb99/abdullah8.htm] , his cooperation with the United States gained Jordan better economic and military position.Fact|date=February 2008 His position with peace in the Middle East is met with criticism from Jordanians of descent.

Jordan received criticism when , Jordan's first female member of Parliament and an outspoken advocate for and , was jailed for slandering the government after she charged it with corruption in a letter to Abdullah. [ [http://news.bbc.co.uk/2/hi/middle_east/1990925.stm "Jordan jails outspoken dissident"] , "BBC News", 16 May 2002. Accessed 3 June 2008.]

, GOC of the Homefront Command and former GOC of , said in a gathering with reporters that King Abdullah might fall and that he could be 's last king. [Bannoura, Saed. [http://www.kibush.co.il/show_file.asp?num=12300 Naveh: “King Abdullah is liable to be the last king of Jordan”] , "Occupation Magazine", 23 February 2006. Accessed 3 June 2008.] The statement created tension between the two countries, and afterwards Naveh retracted his statement and apologized. [ [http://news.bbc.co.uk/2/low/middle_east/4743244.stm Israeli general in Jordan apology] , "BBC News", 23 February 2006. Accessed 3 June 2008.] Later, the Israeli prime minister expressed the disagreement of Israel with Naveh's statement, and referred to it as a personal and irrelevant view. [http://www.jordanembassyus.org/02242006001.htm] [http://news.bbc.co.uk/2/hi/middle_east/4743244.stm] In March 2007, commented on any American withdrawal from Iraq by saying that, " is worried a hasty American withdrawal from Iraq could have negative impact on the Hashemite regime in Jordan..." Jordan's spokesman Nasser Jawdeh replied by saying, "The Israeli prime minister should worry about his political future before worrying about us." [ [http://www.khaleejtimes.com/DisplayArticleNew.asp?xfile=data/middleeast/2007/March/middleeast_March296.xml&section=middleeast&col= Jordan irked by Olmert remarks on Iraq pullout] , "Khaleej Times", 19 March 2007. Accessed 3 June 2008.]

Like his father, King Abdullah pushed forward a policy of reform. In a speech before the , King Abdullah presented several political reform strategies to help Jordan become more democratic.

On 16 April 2008 a new Jordanian law went into effect. Parliament passed the law in 2007 but the government agreed to give parties a grace period to organize themselves. Local s in Jordan have reported that only fourteen of Jordan’s thirty-six political parties have been able to comply with the new regulations, which include obtaining a certificate of government support and an increase in minimum party membership from 50 to 500. Parties unable to comply, including eight of the fourteen-party opposition coalition, were forced to dissolve and are calling the new law unconstitutional. The Islamic Action Front (IAF), the political arm of the and Jordan’s largest opposition party, was able to comply with the new law. [http://www.carnegieendowment.org/publications/index.cfm?fa=view&id=20108&prog=zgp&proj=zdrl,zme#news]

On 28 November 2004, Abdullah removed the title of Crown Prince from his half-brother, Hamzah, whom he had appointed on 7 February 1999, in accordance with their late father's wishes. In a letter from Abdullah to Hamzah, read on Jordanian state television, he said, "Your holding this symbolic position has restrained your freedom and hindered our entrusting you with certain responsibilities that you are fully qualified to undertake." No successor to the title was named, but some analysts believe it probable that Abdullah intends to name his own son, Prince Hussein, to succeed him at some point in the future. [ [http://news.bbc.co.uk/2/hi/middle_east/4050231.stm Jordan crown prince loses title] , "BBC News", 29 November 2004. Accessed 3 June 2008.]

On 20 January 2007, King Abdullah revealed to "" that Jordan has plans to develop nuclear power strictly for internal energy purposes. [Eldar, Akiva. [http://www.haaretz.com/hasen/spages/815304.html King Abdullah to Haaretz: Jordan aims to develop nuclear power] , "Haaretz", 20 January 2007. Accessed 3 June 2008.] According to the UN Office for the Coordination of Humanitarian Affairs though, Jordan is one of the poorest countries in terms of access to drinking water, and thus some have raised questions about King Abdullah's plans for making it a powerful country capable of developing nuclear energy. [ [http://www.irinnews.org/InDepthMain.aspx?InDepthId=13&ReportId=61829&Country=Yes JORDAN: Water shortage remains a constant headache] ] Jordan is one of the few non-petroleum producing nations in the region and is strategically dependent on oil from its neighbor, Iraq. Continuing civil unrest in Iraq puts Jordanian national and energy security at risk.

international published an article titled "Jordan edging towards democracy", where King Abdullah expressed his intentions of making a democratic country. According to the article, president "urged King Abdullah, a U.S. ally, to take steps towards democracy." [ [http://news.bbc.co.uk/2/hi/middle_east/4213699.stm Jordan edging towards democracy] , "BBC News", 27 January 2005. Accessed 3 June 2008.] Thus far, however, democratic development has been limited, with the monarchy maintaining most power and its allies dominating parliament.King Abdullah was commended on his political reform strategies.

King Abdullah has many interests. He is known to be adventurous and has a love and passion for , , and . He actively promotes tourism in Jordan, and was the guide for the documentary by the travel channel in Jordan. The king is also an acknowledged fan of the science fiction saga "". In 1995, while he was still a Prince, he appeared in the " "episode "Investigations". [ [http://news.bbc.co.uk/2/hi/entertainment/277584.stm BBC News | Entertainment | The King of Star Trek ] ]

His interest in the film industry has also influenced his decision to create the in the coastal town of , in partnership with the School of Cinematic Arts on 20 September 2006. [ [http://cinema.usc.edu/summer/resources/newsDetail.cfm?cid=6365 Jordan Signs Agreement With USC To Create Middle East Cinema Institute] .]